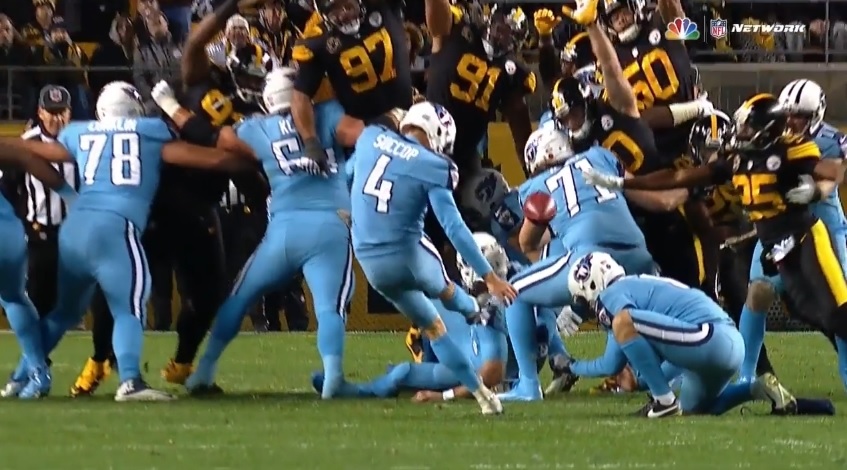 Special teams hasn’t often been kind to the Pittsburgh Steelers this year. You can bet Danny Smith has gone through several  packs of gum. But last night provided splash in a positive way. T.J. Watt blocked a Ryan Succop 48 yard attempt early in the second quarter.

After the game, Watt couldn’t help but laugh at the moment.

“I just tried to stay as low as possible and get through a gap and toss my hand up,” he told reporters via the team site.

That’s exactly what happened. Watt basically ran over offensive tackle Dennis Kelly, getting penetration and getting a good piece of the kick, which fluttered another ten yards behind before hitting the ground.

Maybe he took some inspiration from his big brother, too.

“I’ve seen JJ block so many dang field goals. That was my first blocked field goal ever in my life.”

Despite being a highly acclaimed first round rokie who captured the starting role from Day One, he’s been a factor on special teams too. The Steelers play basically their entire starting 11 on the field goal block team and Watt is a starter on punt coverage, serving as the team’s left tackle and taking Vince Williams’ old spot. Big shoes to fill but he’s done a fine job while adding that splash play last night.

“It hurt a little bit. Hard kick but it was pretty cool.”

Watt, as you’d expect was fired up after the block. So was Danny Smith.

Inject this GIF into my veins. #Steelers pic.twitter.com/hlOmWEkqEr

It’s the Steelers first block since October of last season when Daniel McCullers got his hands on one. Watt’s the first Steelers’ linebacker to block a field goal since James Farrior in 2002.