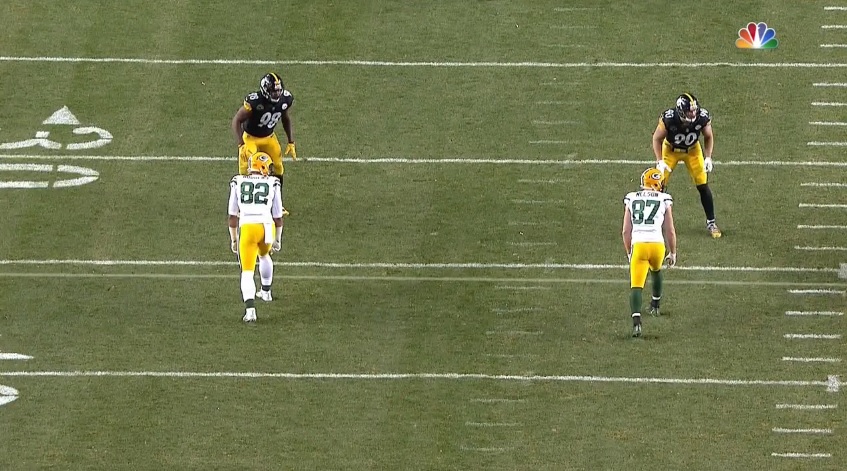 In Pittsburgh, it’s unusual for a rookie to have such an impact. It’s unusual for a rookie to have as many sacks as T.J. Watt. But according to Mike Tomlin, unusual might be an apt word to describe his play. The rookie made as many plays in coverage as he did as a pass rusher Sunday night and in today’s press conference, Tomlin was asked about that element of Watt’s game.

Watt officially finished the day with one pass breakup, a great play on a throw to wide receiver Jordy Nelson, but contested others as well. The Steelers’ outside linebackers have been dropping into coverage even more often than usual and part of that is probably due to Watt’s athleticism and comfort moving backwards.

“Overall, global awareness helps him and helps anyone makes the type of plays that you mention when they’re seemingly out-manned,” Tomlin said. “Knowledge levels that playing field and for a young guy, he’s displayed unusual knowledge.”

Of course, none of this is a surprise to Steelers or those who followed him during his time at Wisconsin. Part of what attracted the team to Watt was the Badgers’ scheme and how closely it resembled an NFL defense.

“There were very, very similar schemes. There was a lot of carryover in terms of the things he was asked to do. It’s really what made the evaluation process a fun one. There was very little grey. We watched him do the things at Wisconsin we ask him to do today.”

Finding a 3-4 edge rusher is one of the draft’s tallest tasks. The majority of teams run an even front, whether that’s a 4-3 or 4-2-5 in college. And most pass rushers are asked to do solely that – rush the passer. But Watt, despite making a late switch to defense, was cut from a different cloth. Wisconsin asked him to drop, asked him to stunt, and athletically, his testing indicated he could handle the transition to the NFL.

Through the first 11 games, Watt already has five sacks. That’s the most by a Steelers’ rookie in 16 years. But he’s also shown a completeness to his game that is uncommon for a guy so new to his NFL career. You could say it’s pretty unique. I think Tomlin would.