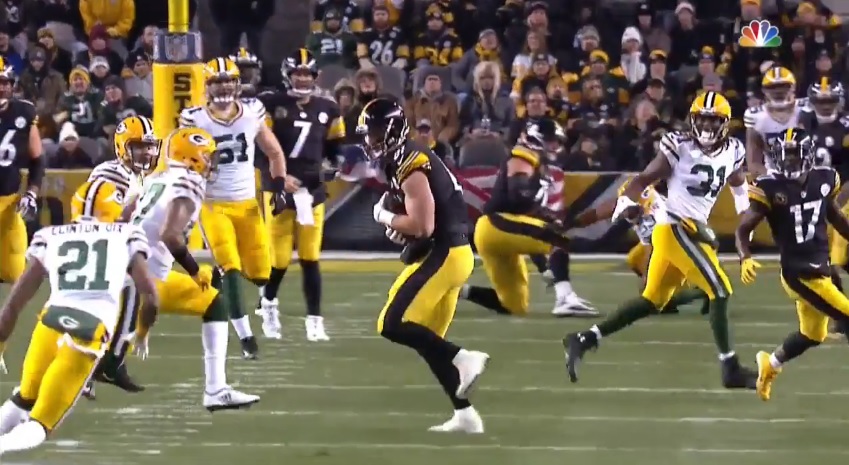 Make no mistake: this wasn’t a pretty game for the Pittsburgh Steelers in primetime, but a win is a win, and that’s just what the black and gold did on Sunday Night Football over the Green Bay Packers.

Ben Roethlisberger and Antonio Brown continue to dominate the competition, with the former heating up at the right time. The biggest concern from this game was the splash plays through the air against the defense once again. That has to get cleaned up, but good teams find a way to win games in which they aren’t playing their best, and that’s just what the Steelers did on Sunday night.

Yes, Roethlisberger threw two interceptions against the Packers at home, but the veteran quarterback was outstanding for the second week in a row, rolling up 351 yards through the air on 33-of-45 passing with four touchdowns, including a late touchdown to Brown to take a 28-21 lead, and then an incredible sideline shot to Brown that the star receiver one-upped him on with the toe-tapping catch.

Of Roethlisberger’s 12 incompletions, at least seven were drops on the night as Eli Rogers really struggled to catch the football in place of JuJu Smith-Schuster, while Jesse James, Le’Veon Bell and Martavis Bryant also had some frustrating drops.

Overall though, Roethlisberger was very impressive on the night, dissecting the Packers’ defense all game long. He’s catching fire at the right time.

Bell rolled up 183 total yards, including 95 yards (4.8 yards per carry) on the ground against a good Packers front seven. As the game went down the stretch, Bell really got rolling and took over the game for stretches, which provided the Steelers’ offense with some balance to keep the Packers guessing.

The standout running back did fumble the ball in a big spot, but that mostly never happens from him and he made up for it immediately, so I’m not going to crush him for something that he rarely does. The defense certainly saved him with a quick three-and-out too.

In the passing game, Bell hauled in 12 passes for 88 yards on the night, giving him 32 total touches one week after receiving just 21. He’s healthy and playing well. That’s a great sign for the workhorse back.

That’s two straight games on national TV that Brown has simply gone off, and Sunday’s game couldn’t have happened at a better time.

His catch along the sideline on the final drive was other-worldly, but Steelers fans should be used to it by now.

Aside from Brown, Bryant had a solid night as a receiver and blocker, finishing with four receptions for 40 yards and a nice touchdown catch in the back of the end zone, but I’m most impressed with his willingness and ability as a blocker.

On some key plays Sunday night, you can find No. 10 working his butt off as a blocker to spring a teammate. He’s had some dark days this season on social media, but he’s doing whatever he can to help this team win. Take your hat off and hand it to him.

As for Rogers, it’s getting closer and closer to the clock striking midnight for him and his time in Pittsburgh. The waterbug slot receiver really struggled to catch the ball against the Packers in place of Smith-Schuster. He might not get a helmet next week.

Justin Hunter saw some action at receiver on the night, including an end zone target that he failed to come up with. It was curious that Roethlisberger targeted the big receiver on a back shoulder throw, considering Hunter hadn’t gotten much run as of late.

Not a bad night for a tight end group missing Vance McDonald once again.

James had a big drop in the middle of the field early in the game, but the big, lumbering tight end finished with three receptions for 32 yards, while backup tight end Xavier Grimble helped bail out the Steelers at the goal line with a 1-yard touchdown catch on a shovel pass from Roethlisberger in the win.

It was hard for me to watch James and Grimble in the run game as blockers, but they didn’t seem to have any egregious missed blocks, so it was a good night overall for this group.

Just two quarterback hits and one sack on the night, while also averaging 5.0 yards per carry on the ground means it was a great night for the Steelers’ offensive line against the Packers.

Yes, the offensive line was hit with a couple of penalties, but this unit was really solid on Sunday night, giving Roethlisberger plenty of time to carve up the Packers’ secondary, while opening up running lanes for Bell to exploit on the night.

This is the group that I’m going to dive into in depth on Tuesday once coaches film comes out to really see how good this unit was.

Heyward continues his Defensive Player of the Year candidacy, finishing with 6 tackles, 2 sacks, 2 tackles for loss and 3 quarterback hits.

Tuitt and Hargrave combined for just 3 tackles and 1 tackle for loss, but the two defensive linemen pushed the pocket and made Brett Hundley uncomfortable down the stretch in the pocket.

LT Walton recorded a sack for the second straight game and continues to give the Steelers valuable snaps in relief of Heyward and Tuitt. John Mitchell has done a good job developing him.

It took awhile for the pass rush to get going, but TJ Watt came up clutch against his boyhood team, finishing with 4 tackles, 1 sack and 1 tackle for loss in the win. He was shot out of a cannon on his sack against Hundley.

Bud Dupree continues to be a strong run defender, but he struggled in coverage on the night and failed to really get a push as a pass rusher against Jason Spriggs. Dupree had four tackles on the night, but I can’t recall one play where he applied real pressure on Hundley.

Ryan Shazier continues to be an elite linebacker, finishing with eight tackles and one pass deflection in the win before leaving briefly with an ankle injury that gave Steeler Nation a scare.

Vince Williams with four tackles and one tackle for loss in the win, while Tyler Matakevich came on in relief for Shazier and was slow to scrape over for the stop on Williams’ late touchdown run.

Make it 5 splash-play touchdowns in the last two games for the Steelers’ defense, namely the secondary.

Artie Burns completely blew the coverage on Randall Cobb’s touchdown for the Packers’ first score, while Coty Sensabaugh bit hard on a double move to Davante Adams before Mike Mitchell whiffed on the tackle for the score.

Williams had a long screenplay go for a score where Sean Davis completely lost contain, so it was a rough night for a secondary desperately missing Joe Haden.

Burns continues to improve as a tackler on the boundary against the run and pass, but the second-year corner is really struggling with coverage assignments. These look like clear mental mistakes. Those need to get cleaned up.

Sensabaugh was just too aggressive on Adams’ score, so that can be cleaned up, but it is a serious concern with this secondary right now.

Mitchell missed at least two tackles in the win, while Davis took a horrendous angle on William’s long catch-and-run. Fortunately, the pass rush picked up at the right time to help the secondary out, leading to the win.

Davis and Mike Hilton finished with 5 tackles each, while Burns added 4 stops.

Chris Boswell drilled the 53-yard game-winning field goal on the night, but the Steelers’ kicker missed the extra point on the Steelers’ first touchdown, which forced them to go for the 2-point conversion later on.

Fortunately, all is forgotten with the game-winning kick.

Jordan Berry was bad on the night, averaging just 32.9 yards per punt on three tries. He came up with a short one on the Steelers’ second-to-last drive of the game, but the defense stood tall.  Berry’s longest punt on the night was just 36 yards. I know he punted on a short field once, but it wasn’t a great night.

I loved seeing Bryant returning kicks. Give me that speed getting a running start with the ball in his hands. He picked up 38 yards on his first attempt, so I’d like to see them continue to do it.