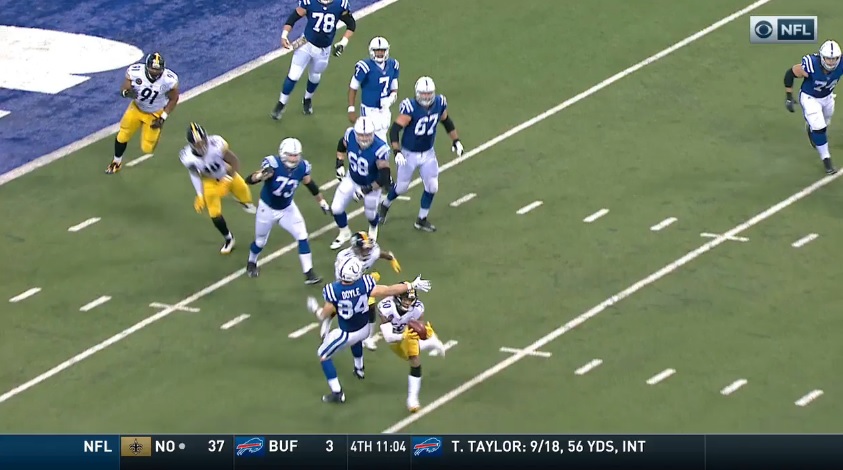 It was undoubtedly a tale of two halves, but a win is a win, and that’s just what the Pittsburgh Steelers picked up on Sunday on the road against the Indianapolis Colts.

Ben Roethlisberger found his stride in the second half of Sunday’s 20-17 win over the Colts, while JuJu Smith-Schuster continued to dominate in the middle of the field. After a rough first half from all units on the road, the offense, defense and special team – for the most part – stepped up in the second half to gut out a win to move to 7-2 on the season and maintain a hold on the No. 1 seed in the AFC.

Like I do every week, I’ll take a shot at grading the Steelers’ positional performances from the game.

An awful interception the second play of the game was a bad look for Ben Roethlisberger, but the veteran quarterback gutted out a decent performance on the road, coming up huge on the final drive of the game, looking like vintage Ben to lead the Steelers to a much-needed win.

Against the Colts, Roethlisberger finished 19-for-31 for 236 yards, two touchdowns and one interception on the day. Roethlisberger made some great throws to Smith-Schuster, Antonio Brown and Martavis Bryant in the second half, which allowed the Steelers’ offense to get going, and the veteran quarterback even made something happen on Vance McDonald’s first touchdown catch as a Steeler, holding onto the ball long enough to allow McDonald to work his way wide open in the end zone.

The deep ball continues to be a major issue for Ben, but he did connect with Smith-Schuster for a big gain down the right sideline, setting up an eventual touchdown to Smith-Schuster in the second half.

At halftime, Le’Veon Bell had just 12 touches despite averaging 4.9 yards per carry in the run game. In the end, Bell didn’t finish with a great stat line (26 carries, 80 yards; 5 catches, 32 yards), but he was effective, keeping the Colts’ front seven honest, which led directly to a play-action touchdown throw from Roethlisberger to Smith-Schuster.

More often than not, Bell was running behind a line that struggled to run block in the second half, but he made things happen, rarely going backwards. He ran hard and carried a heavy workload in the game. It wasn’t your traditional Bell game, but it was good enough to help the offense win a crucial game in the second half of the season.

Brown really struggled to do much of anything against the Colts’ secondary (3 catches, 47 yards on 7 targets), but his last catch of the day – a 37-yard catch-and-run – helped set up Chris Boswell’s game-winning field goal.

With the Colts focusing so much coverage on Brown in the game, Smith-Schuster had a huge game for the second straight week, reeling in 5 passes for 97 yards and a score, giving him 12 catches for 290 yards and 2 touchdowns. He was the go-to guy for Roethlisberger throughout the day, while Bryant came through with 3 catches for 42 yards, including a huge 19-yard catch-and-run on the final drive. That’s the most we’ve seen Bryant involved in the offensive plan since Week 2 against Minnesota at Heinz Field.

Eli Rogers had just one catch for 2 yards, but it picked up a key first down on the last drive, and Rogers also showed impressive toughness on the day, taking the big shot on his lone catch, while also showing his willingness to mix it up as a run blocker.

It wasn’t a great performance from the Steelers’ tight ends, but it was good enough. That’s all you can ask for.

McDonald hauled in two passes for 16 yards and a score, while serving as a good run blocker once again, but it was Jesse James who didn’t do much of anything, seeing just two targets, failing to record a reception and not really making much of an impact as a run blocker.

Xavier Grimble got limited offensive action on Sunday, but he continues to improve as a blocker when out there in run situations.

Maurkice Pouncey was hit with a big holding call, while Ramon Foster was absolutely whooped by Hassan Ridgeway for a sack. Marcus Gilbert had a relatively quiet game in his return from a hamstring injury, but that’s usually a good thing with offensive linemen.

Alejandro Villanueva and David DeCastro did nice jobs opening holes for Bell and James Conner, but the offensive line as a whole didn’t do it enough on a consistent basis.

After struggling to get much of a push against the pass and enough penetration against the run in the first half, the Steelers’ defensive line came out on fire in the second half as Stephon Tuitt recorded his first sack of the season and added four more quarterback hits on Jacoby Brissett, while Cameron Heyward played a strong game against the run, finishing with two tackles and two quarterback hits.

Javon Hargrave was quiet on the day, failing to record a stop, but he did bat down a pass at the line of scrimmage. Despite Hargrave’s quiet day, Tuitt was a monster all game long, finishing with three tackles, three tackles for loss, one sack and those four quarterback hits.

The Steelers’ linebacking corps really struggled to make tackles consistently on Sunday and had a hard time getting off blocks against the run game, but in the second half they stood tall, helping the defense consistently get off the field.

Ryan Shazier missed numerous tackles against the Colts, but he finished with five tackles, two pass deflections and one huge interception deep in Indianapolis territory.

Vince Williams should have a forced fumble to his credit, but a blown call by the officials took that away. Despite not having the forced turnover to his credit, Williams finished with five tackles, one sack, one tackle for loss and one quarterback hit in the win. He continues to get better and better each and every week.

On the outside, TJ Watt struggled mightily against the run, failing to keep containment at times, but he seemed to right the ship in the second half, finishing with three tackles in the win.

Bud Dupree really turned up the heat as a pass rusher in the second half, consistently getting around the edge against Colts offensive linemen to put heat on Brissett. Dupree finished with four tackles, three tackles for a loss, one sack and one quarterback hit.

Aside from that, the Steelers’ secondary was decent as Burns tightened up in coverage for the most part, while Coty Sensabaugh – in for the injured Joe Haden who looks lost for the season with a broken fibula – played well, finishing with three tackles and one pass deflection.

Hilton was solid coming off the edge on blitzes, recording three tackles and one quarterback hit, while Burns finished with two tackles.

Mitchell went down with an injury in the second half, going off the sideline on a cart with an ankle injury. Prior to the injury, Mitchell finished with four tackles.

Sean Davis had the best game of any Steelers secondary play, finishing with a team-high eight tackles and one tackle for loss. He continues to make plays each and every week. He’s rounding into shape as a above-average defender.

A blocked extra point and a missed field goal by Boswell marred a bad day for the Steelers’ special teams unit on Sunday, but all is fine – for now – since Boswell drilled the game-winning field goal as time expired to give the Steelers the win.

Folks were exceptionally hard on Jordan Berry in my last grades piece, but how about his performance today? Hard to complain about that one.

Berry finished with an average of 49.5 yards per punt on six kicks, dropping three inside the 20-yard line with a long of 58 yards. On top of his punting performance, Berry helped save the Steelers points on the blocked extra point, hustling down the field to cut off the Colts defender, forcing him back towards the middle of the field where James made the stop short of the goal line.

In the return game, Smith-Schuster showed a little burst on kick return with a 25-yard that he nearly busted loose on, while Brown continues to make head-scratching decisions on punt returns.

A change should be in the works on punt return with Rogers getting his old job back. It’s time.