According to a Wednesday release from the NFL, Steelers running back Le’Veon Bell (3rd overall, 227,771 votes) and wide receiver Antonio Brown (5th overall, 215,584 votes) are currently in the top-five vote-getters with one week of results in the books.

Bell currently leads the NFL in rushing yards (886) entering Week 12 of the regular season while Brown leads the league in both receptions (70) and receiving yardage (1026).

The Steelers are also have a few other players who are currently the top vote-getters at their positions and that list includes tackle Alejandro Villanueva (48,530 votes), guard David DeCastro (62,342 votes), center Maurkice Pouncey (54,861 votes), inside linebacker Ryan Shazier (61,088 votes) and special teamer Tyler Matakevich (17,499 votes). 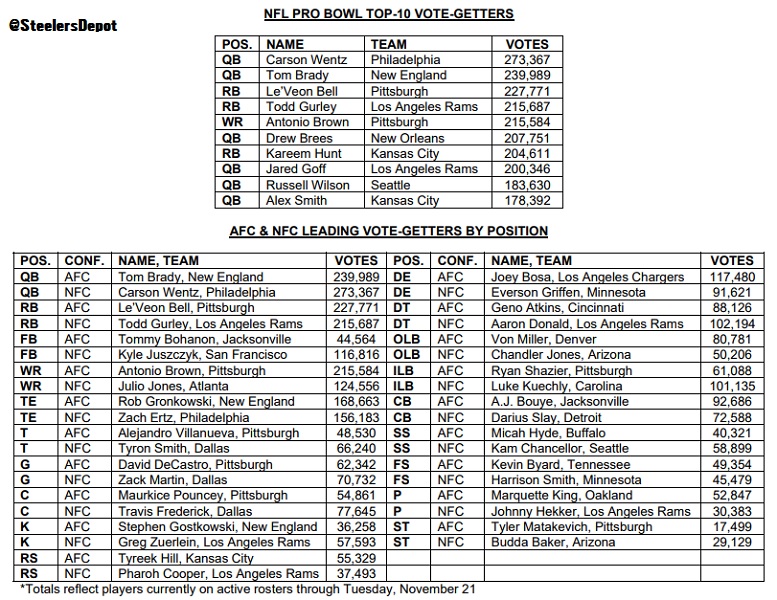 Per the Wednesday NFL release:

Fan voting for the 2018 Pro Bowl will continue online and on web-enabled mobile phones at www.NFL.com/probowlvote until Thursday, December 14. Fans may also vote for who they want to see on the 2018 Pro Bowl roster via Twitter through a Direct Message (DM) Voting Experience, which has never been done for an All-Star game before. Fans may participate via entry cards tweeted from all 32 team accounts or by directly visiting the @NFL profile page at Twitter.com/NFL. The entry cards will initiate a private “Direct Message” and enable fans to select a position group or search for a player or team to begin the voting process.

During the final week of 2018 Pro Bowl voting – December 7-14 – fans will be able to vote directly on Twitter. To cast such a vote, fans should tweet the first and last name of the player, or the player’s official Twitter handle, along with the hashtag: #ProBowlVote. This method is in addition to the online ballot at NFL.com/ProBowlVote and the DM Voting Experience, which will both be available throughout the voting period.

The 2018 Pro Bowl, which kicks off at a new start time of 3:00 PM ET, will be televised live from Camping World Stadium on ESPN and ESPN Deportes and simulcast on ABC. Players for the game are determined by the consensus votes of fans, players and coaches. Each group’s vote counts one-third toward determining the 88 All-Star players who will be selected to the Pro Bowl. NFL players and coaches will cast their votes on Friday, December 15.