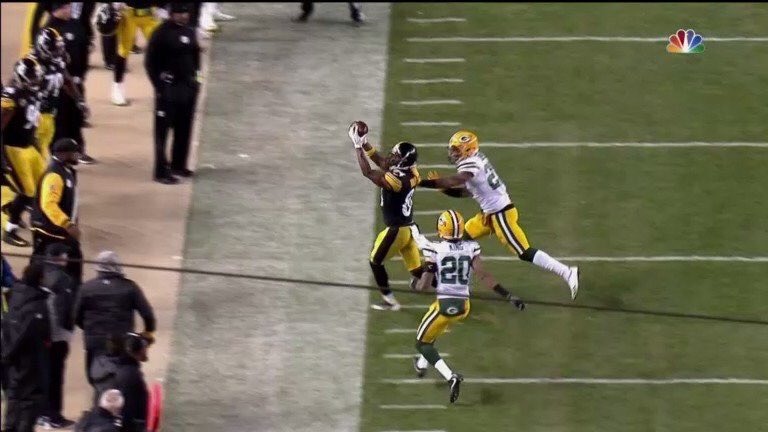 Though the Pittsburgh Steelers were lacking their JuJu, they were still on the beat in Sunday Night’s victory over the Green Bay Packers. Though the Steelers may have not be on beat all game, they came through when it mattered most, battling back in the fourth quarter to a 31-28 victory.

Steelers quarterback Ben Roethlisberger enjoyed a back and forth night. The quarterback threw for four touchdown passes but was also a tad problematic, throwing a pair of interceptions. Along with a handful of drops and a lackluster defensive showing, Roethlisberger’s interceptions kept the score closer than expected.

A back and forth night, saw the score tied at 28 all with just over two minutes remaining. This was the perfect circumstances for Roethlisberger to do Roethlisberger like things. The veteran quarterback drove the Steelers in position for Chris Boswell to kick a walk off 53 yard field goal to secure a 31-28 victory for the Steelers.

The Steelers defense was less than stellar during all night, as they allowed not one but two long touchdown passes to fall behind 14-6. A busted coverage led to the Packers’ first score as Randall Cobb jogged into the end zone untouched after receiving a 39-yard pass from Brett Hundley. The Packers’ second score was the result of a lack of execution as running back Jamaal Williams took a screen pass 54 yards to give the Packers their second touchdown of the quarter.

The Steelers continued to make mental mistakes, leading to more big scores from Hundley and company. On the Packers’ opening drive of the third quarter, Hundley found Davante Adams for 55 yards and a touchdown, as the receiver burned cornerback Coty Sensabaugh on a double move.

The Steelers made Hundley look like the injured Aaron Rodgers, as the backup quarterback threw for three touchdown passes and no interceptions. Hundley’s 134.3 passer rating was a major reason why the Packers were in the Steelers’ back pocket for majority of the game.

Antonio Brown would look to take things into his own hands as the Steelers trailed by a touchdown late in the third quarter. A beautiful corner of the end zone grab tied the game at three scores a piece and helped sway momentum in the Steelers’ favor.

The wide receiver was not finished yet as with he added another touchdown to his night, reeling in a 33-yard reception to put the Steelers ahead 28-21. With the spotlight on him, Brown finished with 10 receptions for 169 yards and a pair of touchdown receptions.

Le’Veon Bell would also enjoy a productive night, finishing with over 190 yards of total offense. The only smear on Bell’s night was a fourth quarter fumble, though it did not lead to any Packers’ points. Bell also set a career high with 12 receptions.

The Steelers will look to continue their winning streak next Monday in Cincinnati as they travel to take on the Bengals.