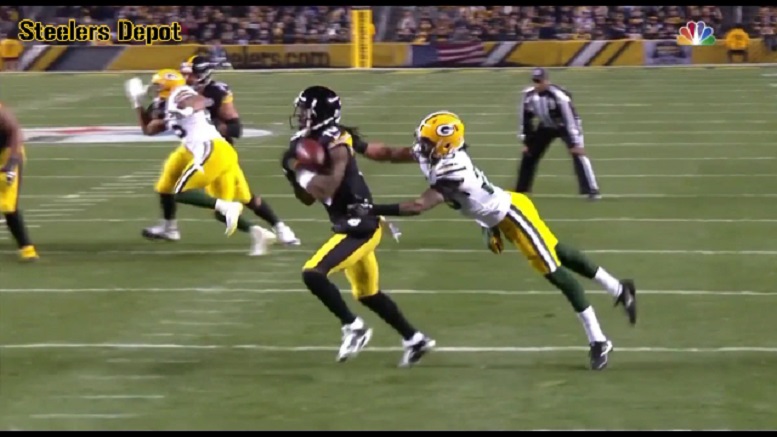 While the Pittsburgh Steelers defense certainly played a big part in the team almost losing at home Sunday night to the Green Bay Packers, their offense tried to play a decent in role in that ultimately happening as well. In fact, you could probably say that the Steelers offense literally dropped the ball too many times Sunday night.

Lost in the combined semi-brilliant Sunday night performances of Steelers quarterback Ben Roethlisberger, wide receiver Antonio Brown and running back Le’Veon Bell is the fact that three other offensive skilled players combined to drop five passes during the game. Below is a look at those drops as well as the effect, if any, they had on the drives that they happened within.

This drop by wide receiver Martavis Bryant came during the Steelers opening drive and on a 2nd down and 6 play from the Packers 14-yard-line. Bryant easily beat Packers cornerback Kevin King off the line with a quick slant and Roethlisberger threw him a perfect pass that went right through his hands and arms. That drop was fortunately followed by a short completion to tight end Jesse James that resulted in a new set of downs.

On the third play following Bryant’s drop, the Steelers offense failed a second down and goal-to-go situation fro  the Packers 2-yard-line and Roethlisberger attempted to throw a back shoulder pass to wide receiver Justin Hunter to the far right of the end zone. While the throw was a bit high, Hunter was still able to get both hands on it prior to falling to the ground, While Packers cornerback Davon House was able to get his left arm between the catch point and Hunter’s chest, his actions still shouldn’t have resulted in Hunter losing his hold of the football. This should have been a touchdown catch and as a result of the drop, the Steelers offense ultimately had to convert a 4th down and 1 play two plays later to finish their opening possession with a touchdown.

The Steelers next drop came during their second possession on a 2nd and 5 play from their own 30-yard-line. This time it was James who was guilty of dropping a lollipop pass from Roethlisberger just outside the hashmarks. There’s not much explanation needed on this drop and fortunately the drive wasn’t killed as a result of it as Roethlisberger went back to James for a gain of 17 on the next official play from scrimmage.

On the play that followed the Roethlisberger to James 3rd down completion, the Steelers quarterback attempted to connect with wide receiver Eli Rogers deep down the middle of the field on a 1st and play from the Steelers 47-yard-line. Roethlisberger threw Rogers a  bullet and the wide receiver seemingly wasn’t prepared for it. The high-ish pass went right through Rogers’ hands. Was this really a drop? Personally, I think it is and especially being as the two players were separated by more than 15 yards. In short, Rogers should have better anticipated the throw. Two plays after this drop the Steelers drive ended thanks to an intended pass from Roethlisberger to Rogers being undercut and ultimately intercepted.

The Steelers fifth and final drop of the game was also by Rogers and it came on 1st and 10 play from the Packers 49-yard-line with 13:35 left in the second quarter. This time, Roethlisberger drops an easy deep pass to Rogers underneath a cover-3 defense shell and it goes right through the wide receivers hands, hits his facemask, and then bounces to the ground incomplete. This Rogers’ drop was much more egregious in nature than his first one. Additionally, the Steelers offensive possession stalled two plays later.

As you can see, those five drops wiped out at least 55 yards of possible offense in addition to one touchdown. Luckily for the Steelers, the offense rebounded and Roethlisberger was 16 of 20 in the second half with two touchdowns in addition to being a perfect 3 of 3 on the game’s final drive that ultimately culminated with a very long game-winning field goal.