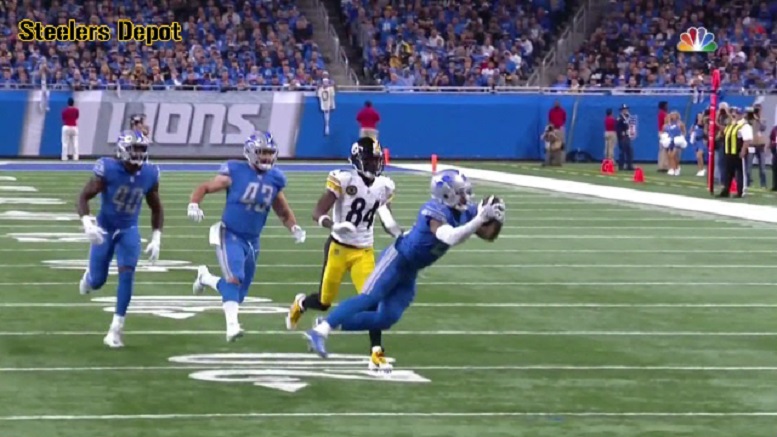 Below are quick breakdowns of all nine of Roethlisberger’s interceptions so far this season:

Roethlisbergers first interception of the 2017 regular season came in Week 1 on the road against the Cleveland Browns. On that early fourth quarter 3rd and 9 play, Roethlisberger attempted to connect with wide receiver Martavis Bryant in the middle of the field with a deep pass against a cover-2 man defense. Bryant didn’t get great separation from slot cornerback Briean Boddy-Calhoun on the play and Roethlisberger’s high-ish rope of a throw wasn’t high enough. A leaping Boddy-Calhoun was able to deflect the football up into the air and Browns safety Derrick Kindred intercepted the football just inside Cleveland’s end zone.

Roethlisberger’s second interception of the first half of the regular season certainly wasn’t his fault. Against the Baltimore Ravens, Roethlisberger connected with  shallow crossing wide receiver Antonio Brown via a mesh route concept on a 3rd and 6 play early in the third quarter. After initially catching the pass from Roethlisberger, Brown had the football stripped from his possession by Ravens cornerback Jimmy Smith on his way to the ground and the loose football popped up and into the awaiting arms of Baltimore safety Eric Weddle.

Roethlisberger had a five-interception game in Week 5 against the Jacksonville Jaguars and his first one came late in the first quarter on a 2nd and 10 play. On that play, Roethlisberger couldn’t step into his throw to tight end Vance McDonald due to rookie running back James Conner failing to properly pick up a blitzing linebacker. Because Roethlisberger wasn’t able to get much on his throw, Jaguars cornerback Jalen Ramsey was able to undercut it for the interception.

Roethlisberger’s second of five interceptions against the Jaguars is also very easy to explain. Jaguars defensive tackle Arby Jones spied Roethlisberger on the play while battling guard Ramon Foster and was ultimately able to get himself just into the passing lane as the quarterback was attempting to hit Brown on a backside slant route. After Jones was able to deflect Roethlisberger’s pass, the football flew directly to Jaguars linebacker Telvin Smith and he returned the interception 28-yards for a touchdown.

Roethlisberger’s third of five interceptions against the Jaguars was also returned for a touchdown. This time, however, it was Jaguars safety Barry Church who picked off Roethlisberger after Ramsey, who had already intercepted the quarterback earlier in the game, helped force a deflection of a high pass to Brown on a 3rd and 17 play up into the air. This play was seemingly against a cover-3 shell and designed to connect with Brown right at the sticks. Perhaps a lower throw by Roethlisberger would have been caught by Brown and if not, at least the football probably wouldn’t have been intercepted and returned for a touchdown.

Roethlisberger’s fourth interception against the Jaguars came with less than six minutes remaining in the fourth quarter and on a 3rd and 10 play. While the official play-by-play from the game indicates that Roethlisberger’s attempted pass was for wide receiver Justin Hunter, that clearly wasn’t the case. Instead, rookie wide receiver JuJu Smith-Schuster was Roethlisberger’s intended target on the play and he was tripped up by the slot defender at about 10 yards down the field and just as Roethlisberger was throwing the football. With Smith-Schuster on the ground, Jaguars safety Tashaun Gipson had an easy interception.

After having already thrown four interceptions in the game, Roethlisberger threw his fifth and final one of the contest late in the fourth quarter with the Steelers trailing 23-9. On this play, Roethlisberger forced the football to Brown via a deep end zone post route against right side quarters coverage and it was plucked out if the air by a leaping Gipson for his second interception of the game. This was just merely Roethlisberger trying to make a play late in a game when down two scores.

Roethluisbegers eighth interception of the first half really needs to be credited to Brown. As you can see below and already probably remember, Roethlisberger was expecting to hit Brown on a short slant on this 3rd and 5 play against the Chiefs but the wide receiver stopped his route. This resulted in Chiefs cornerback Marcus Peters being in the right place at the right time for the easy interception. This one goes squarely on the shoulders of Brown, not Roethlisberger.

Roethlisberger’s final interception of the first half of the regular season was perhaps his most egregious one. He stares down Brown right from the snap and attempts to force the football deep down the numbers against half-field coverage and Lions safety Glover Quin is essentially given a gift interception.