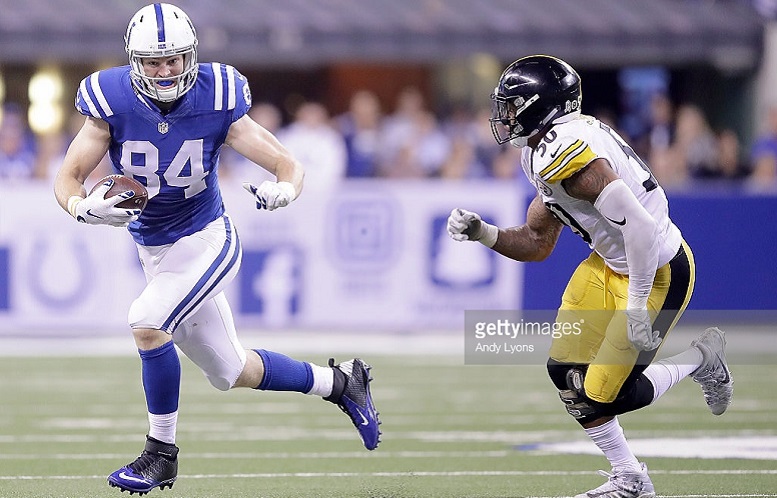 The Pittsburgh Steelers will play the Indianapolis Colts Sunday afternoon at Lucas Oil Stadium and that means I’ll get a chance to watch one of my favorite players currently in the league face one of the top passing defenses in the league. The player I’m talking about is none other than Colts tight end Jack Doyle. On Tuesday, Steelers head coach Mike Tomlin talked a little about the challenges his defense faces Sunday when it comes to defending the sixth-year Western Kentucky product and former undrafted free agent

“Jack Doyle is a high volume catch guy at the tight end position much like some tight ends that have proceeded him there in the past, [Coby] Fleener and [Dwayne] Allen,” Tomlin said during his Tuesday press conference. “He’s the latest addition of a guy who has an awesome rapport in Indy with his quarterback. Jacoby [Brissett] is finding him early and often and in situational ball. They work the interior portions of the field extremely well, be it man or zone. He’s been an awesome security blanket for his quarterback. I think he’s leading everybody in the NFL in the last month in terms of targets and catches and that’s wideouts included.”

Tomlin is spot on with his assessment of Doyle. In fact, from Week 4 to Week 9 the Colts tight end registered a league-high 38 receptions that were good for 305 yards and two touchdowns and that was on 48 total targets. To put that into some sort of perspective for you, Steelers wide receiver Antonio Brown caught 31 passes for 481 yards and two touchdowns during that same span, albeit in one less game played.

In past seasons the Steelers defense has had some issues when it comes to covering tight ends. With that said, this year’s unit is seemingly doing a better job so far this season against tight ends, as according to my research, the Pittsburgh defense has allowed that position to catch just 35 passes for 356 yards and two touchdowns on 60 total targets. By the way, both of those touchdown receptions came on goal to go downs and they were the exact same plays against a Steelers defensive personnel grouping that included inside linebackers Tyler Matakevich and L.J. Fort.

On Tuesday Tomlin was asked to explain why he believes his defense is seemingly doing a better job of covering opposing tight ends so far this season.

“I wouldn’t chalk it up to one specific thing,” Tomlin explained. “I think, just largely, we’ve been better and more consistent in rush and coverage, and specifically the combination of rush and coverage. We often times talk about how those two things are married. I think we’ve married them in a positive with positive results on a more consistent basis this year. That probably doesn’t directly answer your question regarding the tight end, but I just think largely, that’s been the discussion with any element of our pass defense.”

The Steelers have already faced one of the league’s top tight ends this season in Travis Kelce of the Kansas City Chiefs and their defense held him under 40 yards receiving on just four receptions. While Doyle isn’t in the same class as Kelce is, he’ll probably be the second-best tight end the Steelers defense has faced in their first nine regular season games and the best one they’ll face until Week 15 when New England Patriots tight end Rob Gronkowski comes to Pittsburgh. Doyle is a do-it-all tight end to boot as not only is a he an accomplished run and pass blocker, he lines up everywhere on the field and that includes some snaps at fullback.

Situationally so far this season, and especially on third downs, Doyle has been targeted 13 times in total and has caught nine passes for 93 yards and a touchdown.

While Doyle has indeed developed into one of the league’s better tight ends, he’s yet to have a big game against the Steelers. In fact, in the three previous games that Doyle has played in against the Steelers he’s registered all of two receptions for 25 yards and both of those catches came in last year’s Week 12 game in Indianapolis between the two teams. So, here’s to hoping that the Steelers defense can hold Doyle to a final stat line similar to that one on Sunday.