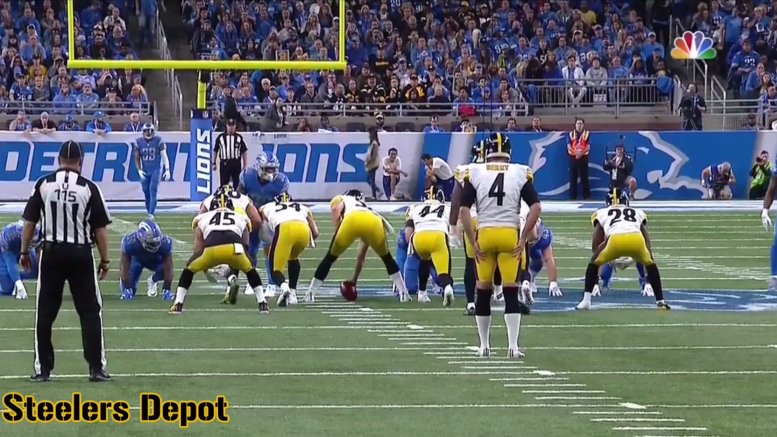 It’s the end of the week, so needless to say that means it’s time for the most exciting part of the weekend. The Pittsburgh Steelers’ special teams report for their most recent game. In this case, their 20-15 victory over the Lions up in Detroit.

There are no big plays on special teams in this one. In fact, it was pretty boring overall. Shockingly, kickoffs have still mostly been touchbacks. But let’s do this.

Something that should be noted, and Alex Kozora already did, is that the Steelers are still showing some seeming nonchalance on their field-goal-kicking unit, especially for one that has already allowed a field goal to be blocked and returned for what should have been a touchdown.

Jesse James let a runner in free last week, which got Danny Smith barking at him heading into halftime. He did it again against the Lions on the opening possession. This is not even a time that you say “it’s gonna happen”, because it’s already happened. And it helped lose that game. It cannot happen again, even if it means benching James there. Vance McDonald and Stephon Tuitt would be my combo, if they’re ever healthy together.

Credit to Lions kicker Matt Prater, who was of course the Lions’ scoring offense for the night, going five for five, including some long shots from 48 and 51 yards out.

The first punt of the game for either team came from the Lions at their own 10. The Steelers, in contrast to last week, put vice jammers on both gunners. And they did their jobs. But their jobs don’t matter when your punt returner calls for a fair catch when nobody is within 20 yards. A discussion should be had about Antonio Brown in this role.

Jordan Berry’s first punt was a good one, booted 41 yards to the 10-yard line, where J.J. Wilcox and Darrius Heyward-Bey as gunners helped induce a fair catch. Really, this one was mostly Wilcox, who has been the primary gunner lately opposite DHB.

The Steelers used vice jammers again with the Lions punting from their 29 the next time around. Again, the jammers worked. Brown had space. He watched the ball bounce, near the sideline but inbounds, behind him for a 55-yard punt to the 16.

The Lions used vice jammers on the Steelers’ next punt. Mike Hilton ran way out of bounds and struggled to get back in. He only got in on the tackle when the punt came to his side of the field because the returner gained 11 yards by that point.

Cameron Kanaday’s snap on the extra point after the Le’Veon Bell touchdown was too far inside the holder’s chest, but it didn’t cause any issues. James again barely got a hand on the edge rusher, but the Lions tried to push inside as well.

The Steelers really blew up the right side of the Lions’ field goal unit on Prater’s 51-yard attempt. It was a nice effort from the entire side, but they didn’t get home.

Tyson Alualu went up and over for a faceplant on the next one. Good job, good effort.

The Lions shanked their first punt of the second half, going for just 19 yards. Good thing, too, as the jammers were burned.

On Chris Boswell’s next field goal attempt, the rush game from the left side, and Xavier Grimble got a good punch on the edge rusher to push him wide while protecting the inside.

The lone kick return was by the Lions, taking it from three yards keep, and it was Roosevelt Nix on the tackle. There was little room to run and shouldn’t have been taken out. Vince Williams filled the only tempting lane up the middle.

Once again, James let the rusher go free, and he came even closer to getting home to block the extra point after JuJu Smith-Schuster’s touchdown.

The Lions viced DHB on the right side, but not Hilton. Hilton got close, but missed the tackle on the returner, and allowed a 10-yard return on a 53-yard punt. Tyler Matakevich barely brought him down by a shoestring.

Vice jamming both sides on the next punt—Wilcox replacing Hilton—DHB did a fantastic job bending to the inside to get around the jammers and still getting back to the numbers to force a fair catch at the 15 on a 44-yarder.

Okay, so maybe it wasn’t as boring as I remembered before going in to review this. But in summation, some jobs need to be discussed. James is not an asset here, and frankly, neither is Brown. He already has a muffed punt anyway.