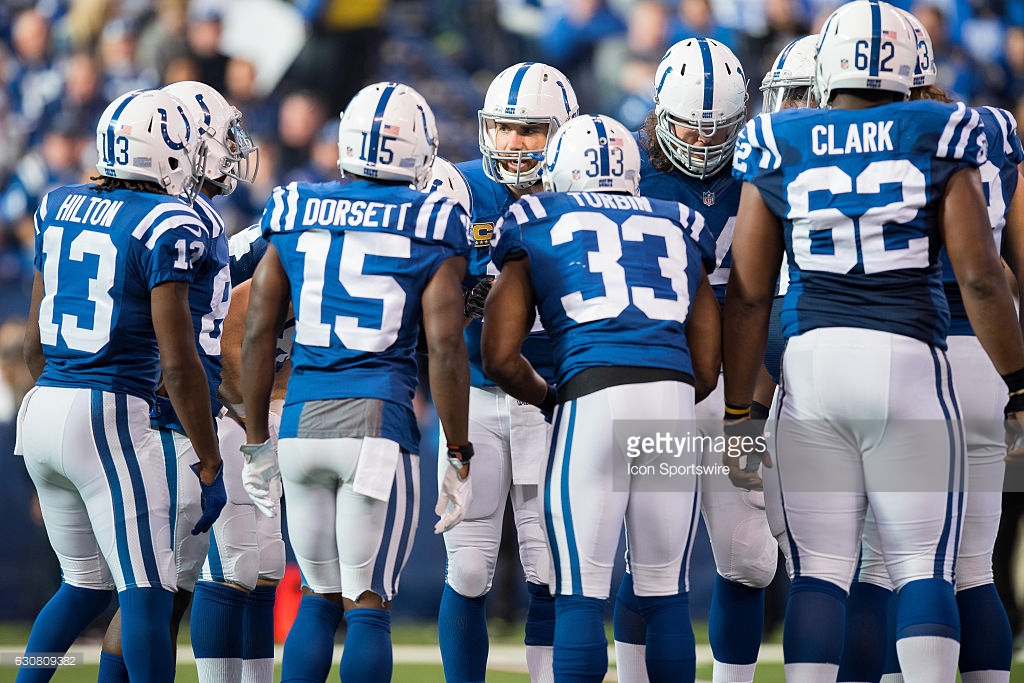 Frank Gore continues to be the man though in his older age, much less explosive. Averaging just 3.6 YPC and has busted off only one run of 20+ yards, one of only three backs with 120+ carries with one or fewer such runs (Lamar Miller and Jonathan Stewart are the others).

They’ve been adding in more and more of rookie Marlon Mack, especially after then-backup Robert Turbin went down, and he’s added some much-needed pop. He’s averaging 4.1 YPC and despite only 52 carries, has four runs of 20+ yards.

A group that isn’t very familiar sounding and their play reflects it. Kelly has promise and that’s about it. Anthony Castonzo isn’t nearly as good as his name indicates (and he’ll probably block me for it). Kalis just made his first NFL start.

Statistically, they have 23 runs of 10+ yards, middle of the pack in the NFL. Thanks to Mack, they have six runs of 20+, tied for 8th. So run game is a little more explosive now than it was early in the season. When they need to score, they do it on the ground, their eight scores on the ground tied for 5th in the NFL.

Their most popular run concept is split zone. Alert for the TE being off ball and between tackle and guard. Basic inside zone scheme with the TE coming across the formation to kick out the end man on the line.

They don’t use a “true” fullback but will use diamond sets, put starter Jack Doyle in the backfield, and also mix in #47 Darrell Daniels in some heavy personnel groupings.

Couple other offensive stats to round out this section. The Colts are 25th in scoring, averaging 18 points per game, though they have put up at least 20 in five of their last seven. Their red zone offense is abysmal, just like the Steelers, ranked 20th at a 41.7% TD rate. That number has dropped to 17% over the last three weeks, worst in the NFL. And their third down offense is middle of the pack at 38%.

Without Andrew Luck, it’s been pretty bad. Jacoby Brissett is a lot better than Scott Tolzien or whoever else the Colts would’ve desperately turned to and Brissett has done about as well as you can hope for under ugly circumstances and a mess of a team/organization.

He’s completing 61% of his throws and tosses even touchdowns this year. But he’s been sacked a league-high 32 times and he’s only tied for 13th in pass attempts. Terrible.

Jack Doyle is their most reliable weapon, the old-school TD who is leading the Colts with 50 catches. But their biggest threat is easily TY Hilton, one of the league’s top vertical threats. He’s averaging an absurd 20.6 YPC while his counterpart Donte Moncrief comes in at a healthy 14.6.

Back to Hilton because he’s the central player in all of this. Top vertical threat and the Colts love to try to create mismatches in the slot. Dave Bryan said he’s run 38% of his routes from there this season and it’s no surprise. He’s their top third down target.

Hilton’s 32 3rd down targets top the NFL. Like here, running an over route in man coverage on the nickel corner.

I can already tell you the marquee matchup to watch Sunday is Hilton v Hilton. TY vs Mike. Certainly the Steelers’ Hilton’s biggest test of the season. He hasn’t faced anyone with his speed. And it’s hard to just roll coverage over the top to him when you have the whole route tree available.

On the year, it’s no surprise they’re top ten in 40 yard completions. Hilton is responsible for five of the six, which leads the league. He’s also second in the NFL with 11 catches of 20+ yards. Only Antonio Brown’s 13 is higher. Really can’t talk about Hilton enough. In part because he’s their only weapon. But he’s a really good one.

One thing the Colts like to do to help their vertical attack is false key their left guard. Pull him on playaction to suck the linebackers and safeties up. Watch out for it on 1st and 10 and on second down after a negative play (like 2nd and 12).

Coming off of the bye week, the Pittsburgh Steelers get set to take on a banged up Indianapolis Colts (3-6) team that’s coming off of a hard-fought Week 9 win on the road against the Houston Texans.

This isn’t your father’s Colts, considering Peyton Manning is long gone and Andrew Luck won’t see the field at all this season. Fortunately for the Colts, second-year quarterback Jacoby Brissett has been pretty solid after coming over the New England Patriots in a trade right before the start of the regular season.

With Brissett directing the offense since Week 2, the Colts are the 25th-ranked offense in the league, averaging 304.6 total yards per game, including 23rd in passing offense (205.9 ypg), 20th in rushing offense (98.7 ypg) and 25th in points per game (18.0). That doesn’t look great on paper, but Brissett gives the Colts a chance to win almost every week, allowing the Colts to possess the ball and move consistently against opposing defenses.

The issue with the Colts’ offense in the ridiculous amount of sacks the offensive line gives up, considering Brissett has been sacked an astounding 32 times in just eight games (302 drop backs). Brissett gets sacked on nearly 11 percent of his drop backs this season. That’s absurd.

When given time to throw though, Brissett has developed a strong rapport with star wide receiver T.Y. Hilton and tight end Jack Doyle. Brissett has shown the ability to not only extend a play with his legs, but also be able to fit some throws into tight windows. He’s also a strong decision-maker, often going to the right spot on a play.

Doyle and Hilton are Brissett’s top two weapons as Doyle leads the team in receptions with 50 catches, while Hilton leads the team in receiving yards (702) and touchdowns (3). Hilton is coming off a 5-catch, 175-yard 2-touchdown performance last week on the road in Houston. He’s the standard deep threat, but with Brissett he’s started to work in the middle of the field more often as well, serving as the safety valve with Doyle.

Against the Texans last week, the Colts stuck with the run despite limited success, which set up the play-action passing game with Brissett and Hilton for the early touchdown.

As you can see in the clip above, Hilton has speed to burn, and the play-action fake gets the corner to hesitate just a bit, allowing the speedster to split the corner and the safety on the post route for the score.

With Doyle, he’s the short-to-intermediate threat that Brissett targets a ton. When the Colts need a big play to keep a drive going, the second-year quarterback will often look for the big tight end.

In the run game, future Hall of Famer Frank Gore continues to get the job done at a starting-caliber level of football in the NFL. While the numbers might not be pretty (3.6 ypc, 455 rushing yards), he’s a consistent workhorse in the backfield, providing Brissett with a run game to lean on while also mentoring rookie game-changer Marlon Mack (4.1 ypc, 212 rushing yards, 110 receiving yards, 3 total touchdowns).

Together, the combination of Gore and Mack is a solid change-of-pace for defenses to deal with, as Gore is the plodding, physical runner while Mack looks to take every carry to the house with his home run speed.

The two would be even better together if the Colts’ offense line could round into shape.

Speaking of that offensive line, the Colts are expected to line up left to right like this on Sunday at Lucas Oil Stadium:  Anthony Castonzo, Jeremy Vujnovich, Ryan Kelly, Kyle Kalis and Joe Haeg.

The two tackles are turnstiles, while Kelly is as solid as they come in the middle of the line. But make no mistake, this unit is below average and the Steelers’ pass rush could have a lucrative game on Sunday against it.

Behind Doyle at tight end, Erik Swoope returns to the team this week after a lengthy absence, while Brandon Williams has gotten some work as of late at tight end. With Doyle in the lineup though, he’s the guy who will receive 90 percent of the targets for tight ends, as it should be.

Along with Hilton at receiver, Donte Moncrief, Chester Rogers and Kamar Aiken provide the Colts with an experienced receiving corps, but the trio behind Hilton is exceptionally short on production.

Moncrief really can’t seem to put it all together as a receiver, while Aiken and Rogers struggle with drops and creating separation, leaving Hilton to have to battle against double coverage more often than not.

Offensively, the Colts aren’t a team that will scare you, but with Brissett, he gives them a chance.

On special teams, future Hall of Fame kicker Adam Vinatieri continues to produce at a solid level for a 44-year old kicker. On the season, Vinatieri is 17-for-18, including 4-for-4 from beyond 50 yards. As the offense struggles to score touchdowns, Vinatieri allows them to stay in games thanks to his consistency as a kicker, which is something this offense desperately needs this season.

After losing punter Pat McAfee to retirement this spring, the Colts have turned to Rigoberto Sanchez, who has showed he can hold down the starting job moving forward. Sanchez is averaging 45.4 yards per punt on the season on 50 punts, dropping 18 inside the 20-yard line.

Sanchez has had one punt blocked on the season, so keep an eye on that Sunday.

In the return game, Quan Bray has come close to busting off a few long punt returns this season, including two weeks ago against the Bengals.

Bray is averaging just 5.3 yards per return on 17 tries, but he’s one missed tackle away from really breaking one off. He’s certainly dangerous.

Bray and Mack handle the kick return duties as well, and much like in the punt return area, Bray is dangerous as a kick returner too, having already returned one 60 yards this season.