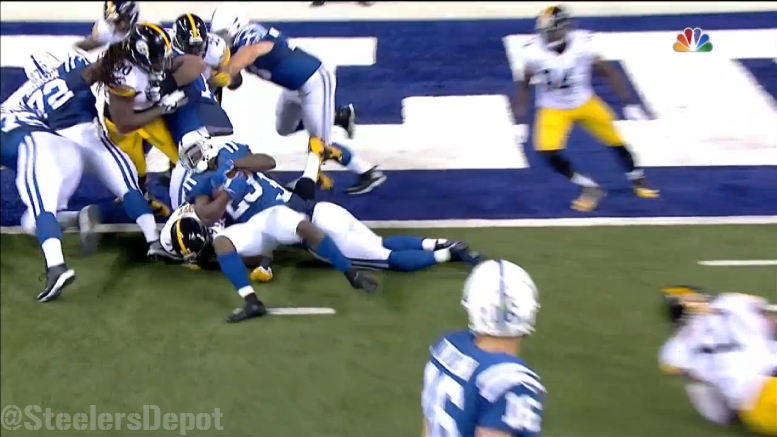 If there is one primary knock on the Pittsburgh Steelers defense during the first half of the regular season it’s that they allowed too many explosive runs to opposing offense’s running backs. If you remember, the Steelers defense allowed six runs of 20 yards or longer in their first five regular season games and not surprisingly, all six of those drives resulted in touchdowns. However, in the Steelers last three games their defense has only surrendered one run of 20 yards or more and that was to Cincinnati Bengals running back Joe Mixon. That run, however, was eventually followed by a touchdown as well.

Long runs aside, the Steelers run defense has been great all season and especially in their last three games. In fact, opposing running backs averaged just 3.27 yards per carry against the Steelers defense in the last three games and only 14 of those 45 total runs (31.1%) were successful ones based on down and distance needed. By the way, 25 of those 147 (17%) running back rushing yards in those three games against the Bengals, Kansas City Chiefs and Detroit Lions came on the aforementioned run by Mixon.

On Sunday the Steelers will play the Indianapolis Colts at Lucas Oil Stadium and that means their defense will be tasked with attempting to stop their veteran running back Frank Gore, who enters that contest with 455 yards rushing and two touchdowns on 127 carries. Not surprisingly, Steelers head coach Mike Tomlin praised Gore during his Tuesday press conference.

“Their running game is in the hands of Frank Gore. What can you say about Frank Gore? Just a lot of respect for him and his body of work,” Tomlin said. “He’s good with the ball in his hands, he’s good in the passing game as a route runner but also as a blitz pickup guy. He’s globally recognized as one of the best in the business in that area and has been for over a decade.”

As you can probably tell by Gore’s 2017 raw rushing stats, he really hasn’t been great this season when it comes to his yards per carry average. Additionally, he enters Sunday’s game against the Steelers with a run success rate of 34.7% and only has one run of 20 yards or longer on the season and 24 of his total carries have resulted in either no gains or negative yardage.

Gore, however, won’t be the only Colts running back that the Steelers defense will be tasked with containing as rookie Marlon Mack also figures to get quite a few carries on Sunday as well

“They are complimenting him [Gore] now with a talented young runner [Marlon] Mack out of the University of South Florida. [We] looked at him in the draft quite a bit,” Tomlin said Tuesday. “He’s another one of these young talented runners. We’ve seen a lot of them. We feel like we have one in James Conner. We’ve seen one in [Kareem] Hunt. Here’s a guy that probably hasn’t got a lot of recognition but is a very talented guy in providing some splash plays for them.”

The Mack splash that Tomlin is referencing is the fact that the rookie running back has registered three runs of 20 yards or more in the Colts first nine regular season games. Additionally, three of Mack’s 10 receptions this season have also resulted in gains of 20 yards or more. On a run-by-run basis, he has a 37.3% success rate, however, it’s worth pointing out that 17 of Mack’s 51 total carries on the season have resulted in either no gains or negative yardage.

When you look at the Colts running game from top to bottom, both on tape and on the stat sheet, it’s not overly impressive. The fact that 45 of their 208 (21.7%) total carries by their running backs this season have resulted in either no gains or lost yardage is all you really need to know ahead of Sunday. In short, it will be very disappointing if the Steelers defense doesn’t completely stifle the Colts running game Sunday afternoon in Indianapolis.