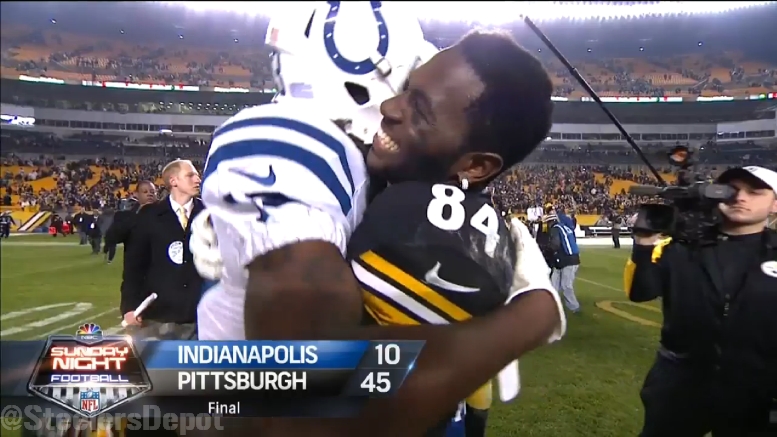 When the Pittsburgh Steelers return to Indianapolis to play the Colts, we will also see the reunion of a pair of talented wide receivers in Pittsburgh’s Antonio Brown and Indianapolis’ T.Y. Hilton, the two of whom were raised in their adolescence in the Miami area.

Though Brown is about a year and a half the elder of the two, both of them were coached, in fact, by Hilton’s father, Tyrone. And both of them stuck out from the rest of the children at an early age. “They were shifty”, the elder Hilton said in an article from a couple years back. It was hard to bring them down, hard to catch up with them”.

That remains true for both years later, and, in fact, both are currently experiencing career-bests in terms of yards per reception since they respectively entered the starting lineup. Brown’s best season in this category came in 2011 before he was a starter, but his current mark of 14.6 yards per reception is a full yard better than any other season. Hilton, being used more as a deep threat than ever this year, is averaging over 20 yards per reception.

Despite living so close to one another, Brown and Hilton lived very different lives because of the nature of their family dynamic and the neighborhood in which they were surrounded. Still, both found an outlet on the football field, and used that outlet to rise above their conditions—and their supposed physical limitations—to become some of the better players at their position at the top level of the sport.

Entering Week 9, Brown and Hilton are actually one and two in total receiving yards, though the former has a commanding lead. Brown currently has 835 receiving yards, while Hilton, coming off a big 175-yard game, has 702. The gap between first and second place is about 13 times as wide as the gap between second and third.

As I wrote about last year, Hilton is always happy to see Brown, but he is tired of his team losing. I covered that angle entering the two team’s contest during the 2016 season, and of course the Colts went on to lose that one, so it’s only gotten worse since then.

The real question is whether or not they will both take the field. Brown is healthy, of course—don’t mean to alarm you—but Hilton suffered a groin injury during the week of practice and was limited for the past couple of days.