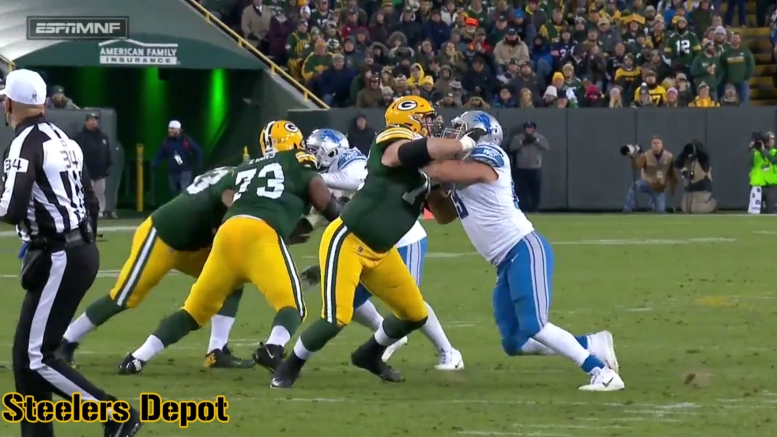 Green Bay Packers right tackle Bryan Bulaga missed three of their first four games this season. Now they wonder if he might miss the rest of the season after the veteran left last night’s loss to the Lions in the fourth quarter after he suffered a right knee injury.

Packers head coach Mike McCarthy said after the game that he did not yet get an opportunity to talk with the team’s head physician, but he said that the doctors looking on Bulaga’s knee “seem very concerned about it”, which is not something you want to hear in such a circumstance.

A former first-round draft pick in 2010, he has only ever played a full season twice in his career, most recently in 2016. He has missed at least four games in four of his seven previous seasons, including the entirety of the 2013 season, and it seems likely that 2017 will be the fifth time.

The Packers will be traveling to Heinz Field in three weeks to play the Pittsburgh Steelers, and when they do, it seems unlikely that they will have their full starting offensive line intact—something that has hardly happened at all this season.

According to ESPN, yesterday’s game was only the second of the season in which all five of their starting offensive linemen were on the field at the same time. They only logged 15 total snaps together heading into the Monday Night game against the Lions.

His right knee buckled while engaged with a defensive lineman on a play early in the fourth quarter. He was carted off the field and immediately ruled out for the rest of the game after then subsequently being carted into the locker room.

Losing Bulaga will not make things any easier on the Packers’ starting quarterback, Brett Hundley, who made his second start last night in place of the injury Aaron Rogers. Rodgers is on the injured reserve list after suffering a broken collarbone, and he will not be eligible to return until late in the season, by which point the Packers may well already be eliminated from playoff contention.

Green Bay fell to 4-4 following last night’s loss, which sees them well out of a playoff spot at this point, as there are three other non-division leaders with a better record, and four more with the same record, two of which have beaten them already.

I’m sure that Bud Dupree would not mind seeing a backup line up at right tackle when the Steelers host the Packers. Anthony Chickillo or Arthur Moats, depending on who ends up lining up on that side, would also be the beneficiary of that misfortune for Bulaga.