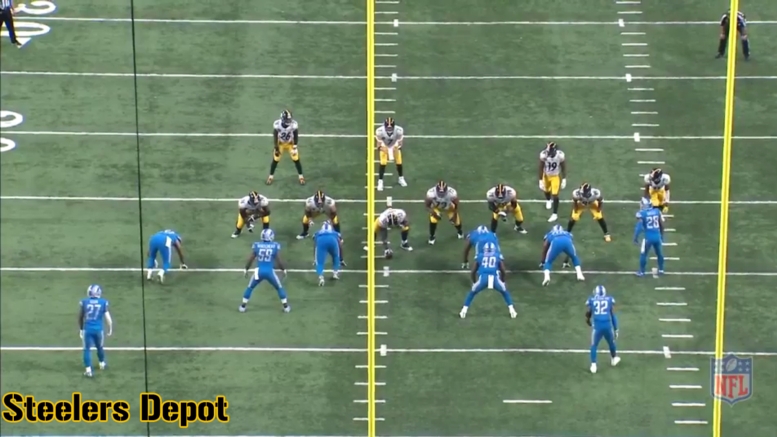 Leading up to the bye week, second-year tight end Xavier Grimble found himself playing a more prominent role than he had been all season—and no doubt the biggest role he is likely to play for the rest of the season.

Due to a domino effect of injuries, the Pittsburgh Steelers basically were left with no other warm bodies at tight end short of Grimble in order to pair with Jesse James, and they were heavily favoring the running game for much of that stretch run, which commands greater usage of personnel packages that feature multiple tight ends.

Presumably, Vance McDonald is healthy again, and so is Marcus Gilbert, so that most likely means that Chris Hubbard may at this point be more likely to see tight end snaps than Grimble, so with that in mind, consider this a tribute to his 2017 body of work.

The Steelers used him in a diversity of roles in the game against the Lions. At the top of their second drive, for example, they held him in for pass protection, holding his own against the defensive end, helping to produce an 18-yard pass.

On the next play, the Steelers brought out the 22 personnel but spread them four wide, leaving only Le’Veon Bell in the backfield. Grimble was set out wide and drew the responsibility of the deep edge defender on what ended up as a three-yard run.

Somewhat later in the game, near the goal line, Bell picked up two yards on first down from the 11. Grimble had two responsibilities on this play. He first downblocked on the end before giving the linebacker a pop, but it wasn’t enough, as the defender absorbed it well and helped chase the back down.

Into the fourth quarter, on a running play up the middle, Grimble was able to wall off the linebacker, who bled out to the offensive left side after he motioned in that direction, on an eight-yard run. He similarly had a good block on the same defender, this time down the field, on a play that failed in the trenches.

Toward the end of the game, with the Steelers trying to bleed out the clock, the Steelers lined up both tight ends off the left side. Grimble drew in the linebacker coming off the edge, then had the presence of mind to peel off and pick up another defender crossing the field to help Bell gain six yards.

It was overall somewhat of an average, and typical, showing from Grimble, exhibiting both good and bad. Strong traits, yet inconsistency of execution. This has been his story throughout his career, including a couple of practice squad years, and that doesn’t seem to be on the brink of changing.