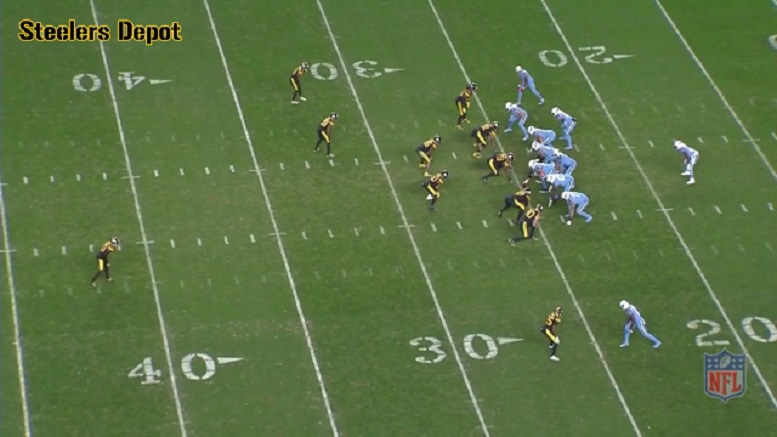 The Titans opened up the second half with a long touchdown reception by wide receiver Rishard Matthews on their first play from scrimmage. After the game was over, Titans head coach Mike Mularkey admitted that they put they play in for Matthews at halftime based on something they saw in the first half.

“We put that play in at the half,” Mularkey said. “Actually, we talked about it right before the half and came in and put it in and saw a coverage and they hit it and thought this is good.”

So, what did Mularkey and the rest of the Titans offensive coaching staff see in the first half that led to them putting in that pass to Matthews on the first play from scrimmage of the second half? Well, if you go back to the Titans first offensive possession of the game and particularly their second play from scrimmage, you’ll notice that the formation that they used for that 2nd and 10 run was the same one they used to open up the second half with. Same ball placement on the field and yard-line as well. The Steelers defense played cover-6 on the back end of that running play, which is a quarter-quarter-half coverage. The half side being manned deep by safety Robert Golden on the weak-side. Watch that running play below:

Now, fast forward to the first play of the second half and you’ll see that the Titans presented the same formation on 1st and 10 and the Steelers defense responded with the same cover-6 on the back end. Watch the route combinations at the snap starting on the weak-side with wide receiver Eric Decker, who runs a deep vertical right at Golden before breaking it off to the outside at around 12-15 yards. This route ensures that Golden stays on his deep half of the field just as he would in a regular cover-2 shell.

On the strong side of the formation, Titans tight end Phillip Supernaw runs a 12-yard square-in route and that occupies Steelers safety Sean Davis. In doing so, that leaves Matthews one-on-one with Steelers cornerback Coty Sensabaugh. Because of the reduced split by Matthews in the formation, it forces Sensabaugh to play with outside leverage.

At the snap of the football, Matthews stems his route to just outside the numbers on the field and as soon as Sensabaugh flips his hips to face the sideline and run vertically, the Titans wide receiver breaks back inside toward the post. This sets up an easy throw for Titans quarterback Marcus Mariota down the middle of the field and he had plenty of time thanks to play-action behind max protection.

If it isn’t bad enough that Matthews caught the pass for a huge gain, Sensabaugh and Golden both missed opportunities to tackle the Titans wide receiver at around the 20-yard-line and he then proceeded to waltz into the end zone for a touchdown. You can see the play below starting with the all-22 view and followed by the isolated route view:

This was a great halftime adjustment by Mularkey and the Titans offensive coaching staff and it was the perfect play call against a Steelers defensive coverage they were fairly sure they would get a second time. In case you’re curious, the Titans used the “Mills” or “Pin” (Post/In) concept against the Steelers defense on that play and Chris Brown of Smart Football recently wrote about it here.

Sensabaugh talked about the big play he allowed after the game was over.

“I gave up a play that I didn’t want to,” Sensabaugh said. “They kind of seen the coverage that we was in and how we was checking against a certain formation and they schemed it up and they got us on that play.”