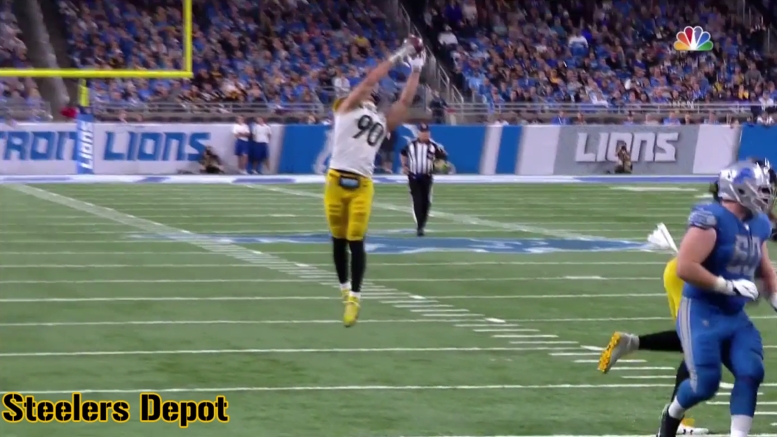 Pittsburgh Steelers rookie outside linebacker T.J. Watt is a lot of things, most of them good. One of them is simply being fun to watch. Another is being versatile on the field, being able to make an impact in all phases of the game, run, rush, and coverage. Even special teams.

And it’s that versatility to hold his own in many different roles that has helped keep him on the field throughout his rookie season—aside from the game and a half that he missed due to injury, of course. His stat line is impressive enough, after all. 28 tackles, four sacks, four passes defensed, and an interception.

He was both versatile and fun to watch against the Lions, even if he didn’t record a sack, or really much pressure. But he spent a lot of the game dropping into coverage. According to Pro Football Focus, he rushed 23 times and covered 20.

Of course, he played the run, too. Early in the game, he was able to get off the block of left tackle Brian Mihalik—who was also contacted from behind—to put himself in position to make a tackle on Ameer Abdullah for a run stop of two yards on second and eight.

On the next play, Cameron Heyward was able to sack Matthew Stafford, but many seemed to miss the fact that Watt also managed to bulrush Mihalik back into the pocket at Stafford’s feet at the same time. He even got held a bit.

On the next possession, Watt paused for play action before showing off his impressive athletic traits by turning and running with rookie tight end Michael Roberts on a corner route down the field. The outside linebacker’s underneath coverage and impressive vertical made it a challenging catch that was not made.

Late in the first half, Watt dropped into coverage again, and in underneath coverage made a swat at a ball aimed for wide receiver T.J. Jones that fell incomplete. It wasn’t the sole reason the pass didn’t connect, but even on a better-targeted ball, it would have affected the chances of a completion.

Later, in the middle of the third, Watt was rushing the passer, and hit a spin move to Mihalik’s outside shoulder that got him around the corner. The problem is that L.T. Walton was washed inside at the same time, and it left a gaping hole for an escape lane that resulted in a conversion of a third and 10.

But you’d better believe all of his work in coverage ultimately paid off. Late in the fourth, setting up to rush from an inside position, he instead dropped into a middle zone coverage and was able to get his hands on a ball to Jones on a drag route.

You can tell he wanted this one, and the truth is he could have had it. But he will get another in time. I don’t think anybody expected him to be this ready as an asset in coverage so early on in his career.