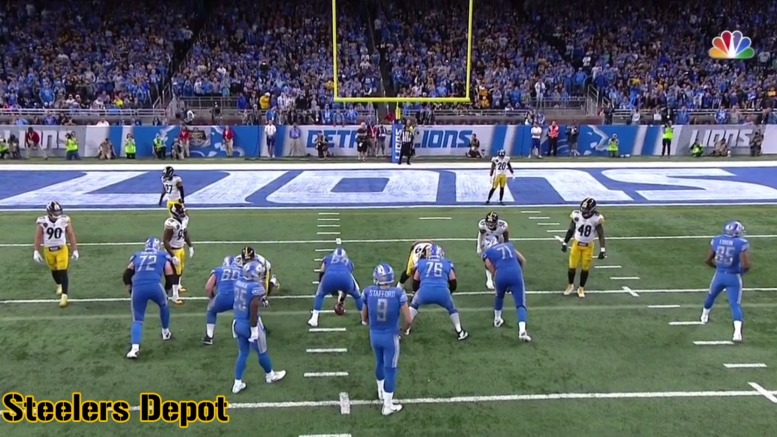 I don’t think I was the only person who was surprised when they saw Robert Golden come onto the field in Detroit two Sundays ago after Pittsburgh Steelers starting free safety Mike Mitchell hobbled off with what was revealed yesterday as an Achilles injury.

Earlier in the year, when a safety had missed some snaps due to injury, the Steelers entrusted that responsibility to J.J. Wilcox, whom they traded for after the initial 53-man roster had been solidified. He even started a game in place of Mitchell.

So why was he called into action over Wilcox for that game (Wilcox later played one snap too)? Will he continue to be the next safety off the bench? I can’t answer those questions, but I can at least look at some of the plays he was involved in.

Early on in his playing time, the Steelers lined him up in the box, which was not uncommon for them when they were using him as their dime safety. But this ended up being a passing play, forcing him to drop into coverage, and he had to clean up the tackle attempt of Sean Davis, which drew a penalty, and eventually a fine.

Later on in the game, with five minutes to play in the third quarter, the Lions were set up with second and goal from the one-yard line. Matthew Stafford dropped back to pass, but he struggled to find anybody open with Golden picking up the receiver taking a sharp cut to the outside as pressure forced the quarterback to roll out to his right.

Later in the game, T.J. Watt was able to leap and bat a ball down playing middle zone coverage, but Artie Burns had solid coverage underneath on the intended target. Golden also came up and was in position to lay a big hit should the ball have reached its destination.

A few plays later, Stafford connected with his tight end on a crossing route for what ended up being a 14-yard connection on third and three. Golden initially seemed to take a dangerous angle that exposed the sideline, but he was able to get to the edge and make the tackle.

It’s probably not too surprising that there wasn’t a whole lot to dissect from less than a half’s worth of snaps from the free safety position, which is often not directly involved in the action unless something bad happens.

I’m still just wondering why the team flipped from Wilcox to Golden. Was it a preferable matchup?