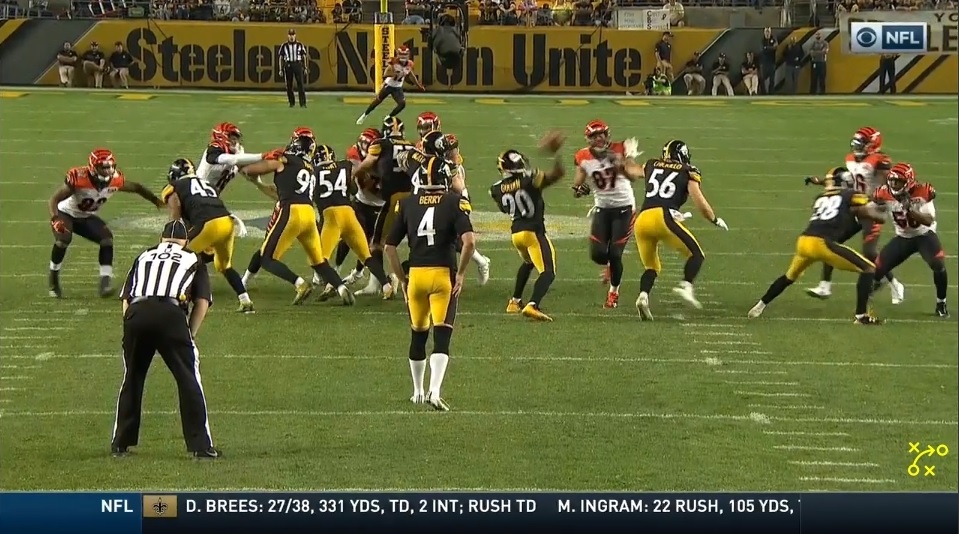 Since the 1970 merger, there have been only two Pittsburgh Steelers with at least two career interceptions and two career completed passes. There’s Tony Dungy, infamously forced to sub in at QB in a 1977 game after Terry Bradshaw and Mike Kruczek left with injuries. He completed three passes to his team. Two others went to the defense.

The other Steeler? Robert Golden. Two career picks, two career completions. Both of the latter came via fake punts, and speaking with Stan Savran, Golden explained the moments leading up to those big plays.

“The pass to Darrius Heyward-Bey, we practiced that play ever since Danny Smith came to the Pittsburgh Steelers. It was a built-in check. If we ever got the look, I pretty much had the green light to make the play.”

The completion to DHB came in a 2017 win, a 44-yard connection to ice the game. Up 26-14 with under seven minutes to go, the Bengals bluffed a heavy punt rush, leaving Heyward-Bey uncovered on the right side. That look gave Golden the ability to call and execute the fake. He threw the ball on the money to a streaking DHB for a big completion.

It led to a Steelers’ field goal, shifted the momentum, and ultimately won the game for Pittsburgh as they moved to 5-2 on the season.

That was the second completion of Golden’s career. The first came in 2014 against the Cleveland Browns. Just like the Bengals game, the Browns left the gunners uncovered and Golden hit Antwon Blake for a 25-yard completion. It was a much riskier situation, the fourth quarter of a tied game with the Steelers deep in their own territory. But it worked because of the Steelers’ practice and planning.

Under Danny Smith, it does sound like there are different rules for when the up-back can carry out a fake. Jordan Dangerfield told us the decision-maker can vary depending on the circumstances. But if the Steelers’ gunners are wide open, it seems the up-back has the freedom to throw it to them. It’s a great incentive to prevent punt return teams from trying to go all-out on a fake, knowing they run the risk of getting burned with a pass.

Golden said the Bengals game was the last time he saw a special teams unit leave the gunners uncovered.

“I haven’t seen that look on special teams defense ever since. But the Bengals presented it to us and we were able to connect on it. It was a good sealing the victory for us that game.”