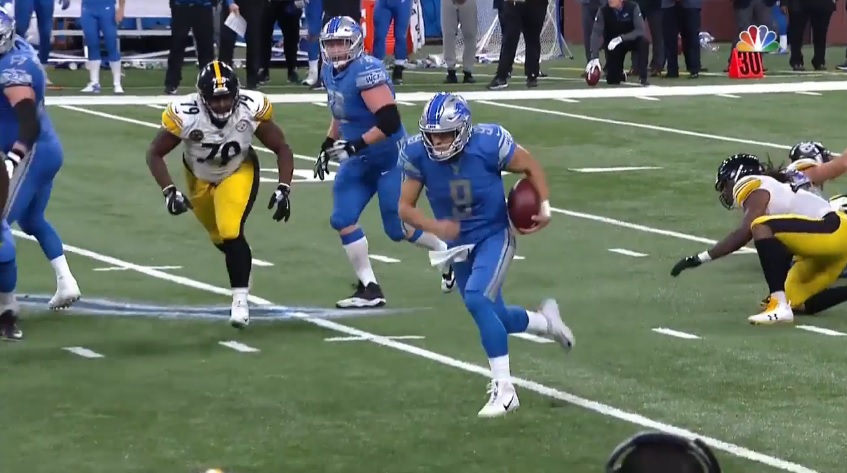 Quick film room today. Lot of discussion this year,and this week after Carnell Lake’s comments, about man coverage. Numbers show the Pittsburgh Steelers are running it less than any other team in the league but as I wrote yesterday, it’s more about when they play it than just sheer frequency.

While yes, the Steelers have to be capable of playing man-to-man and I think it’s been successful, there are going to be downsides to every scheme. One play Sunday night against the Detroit Lions showcased one of those flaws.

Lack of vision on the football.

When you’re facing a statue of a QB, it’s not as much of an issue. But even a semi-athletic QB like Matthew Stafford can make you pay. Man coverage means your back is to the football so if the quarterback breaks contain, the secondary is always going to be late reacting.

That happened on 3rd and 10 in the third quarter of last week’s game. Stafford breaks contain (we’ll get to some of the rush lane issues next week, I promise) and with both receivers to the top running vertically, the corners carry and lose sight on the QB. Stafford has a huge lane to the left and scampers for a first down, an infuriating one at that.

That’s not to say all man coverage is bad or that it shouldn’t be used. It’s effective and we’ve shown that time and time again. But it’s important to recognize some of the flaws to the concept and why in some games the Steelers have played a ton of zone.

Kansas City is a great example. One of the league’s most mobile starters, Alex Smith, is not someone you want to play man coverage against. The Steelers played a ton of zone that game and shut down the Chiefs’ attack. Smith never beat them with his arm or his legs. You could see a similar story in a few weeks against Marcus Mariota.

Sure, against the Tom Brady’s of the world, you better be playing more man-to-man, but that’s for a discussion that’s still weeks away. Man coverage is not the cure all even if the Steelers are better equipped to use it with the secondary they’ve built.