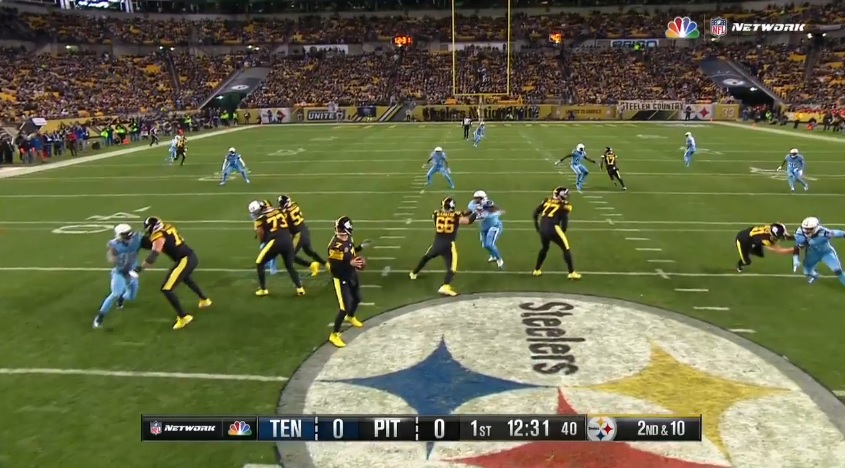 It’s no secret the Pittsburgh Steelers’ vertical attack has been underwhelming this season. For Ben Roethlisberger, it’s become one of the biggest talking points and, rightfully so, criticisms. But things have gotten slightly better and in turn, the offense feels more on track.

There’s one key to Roethlisberger’s success. His eye manipulation. It’s been good this year and when it works, when he’s able to move the safety, it creates big plays.

Let’s start with Big Ben’s 41 yard TD on the Steelers first drive Thursday night. Roethlisberger gets the Tennessee Titans to jump on a hard count (a consistent strength of his this year) and with the free play, knows he can take a shot. Beyond that, Roethlisberger does a great job of looking off the center field safety, getting him to open his hips and move the opposite direction that Ben wants to go with the football.

He comes off that “read” and finds Brown down the left sideline, one-on-one with the corner. Airs it out and Brown comes down with it, the safety a step late from being able to break the ball up, only able to hit Brown, who hangs on.

If Roethlisberger doesn’t look off the safety, he’s definitely going to make a play on the ball. Either by breaking it up or picking it off. It was the critical component to the play. Here’s the aerial view.

Not the first time it happened. Go back to Week 7 and his 31 yard TD pass to JuJu Smith-Schuster. Again, single high safety. The concept works well, we covered it at the time, but Roethlisberger again manipulates the safety with his eyes. Gets him to open his hips and drift towards Antonio Brown, always a threat when he’s going vertical, to open up JuJu running a deep over route.

With the tight end running an out to hold the corner, Smith-Schuster is wide open. Touchdown.

Finally, even in losses, Roethlisberger has shown that ability. Early on against Jacksonville. Deep ball to Antonio Brown. Gotta move that safety. Ben stares down the middle of the field to hold the FS in the middle so he can’t get to the sideline in time and make a play on the ball. AB does his thing and comes down with it for a 49 yard gain.

If Roethlisberger wants to continue his recent success on the deep ball, and wants to be more consistent overall, it’s all going to come down to his eyes. Move the safety, create the matchup, make a splash.