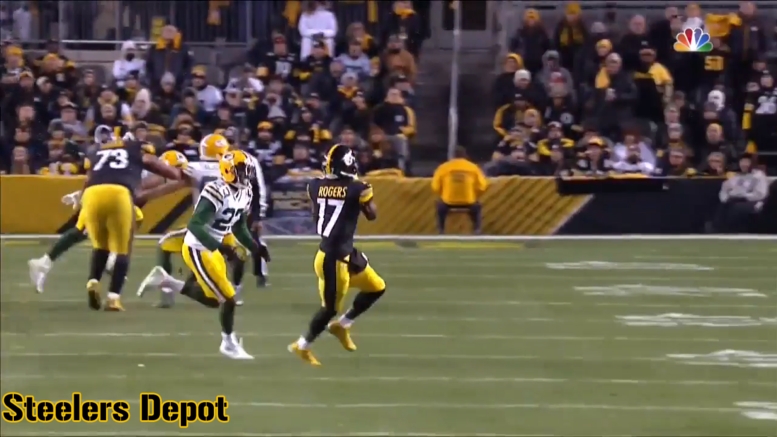 Third-year Pittsburgh Steelers wide receiver Eli Rogers saw his most extensive playing time of the season on Sunday in the absence of JuJu Smith-Schuster, but he struggled with drops, now with three on the season after dropping two passes against the Packers.

Still, it wasn’t all bad for Rogers, and he had a clutch third-down reception in the third quarter that largely went overshadowed by his earlier blunders. So let’s take a look back at a handful of his targets from the game.

Early in the game, on the opening drive, Ben Roethlisberger looked his way as they entered the red zone on first down. Coming out of the slot in a bunch formation, a pick helped him create separation, but a poor throw prevented him from doing much beyond securing the catch. This result was on Roethlisberger for the throw.

Later in the quarter, the quarterback looked his way again on third down, needing five. Again working out of the left slot, he was able to earn the offense a new set of downs with a nine-yard reception. The slot defender didn’t allow him much separation, but he didn’t need much coming back to the ball after getting his hips turned open.

Of course, it was just a couple of plays later that he had his first of two drops on the night, which figured to be a nice completion down the middle for a big gain. The ball was a little bit behind him, but Rogers was slow to adjust to it, and it went through his hands.

He had an even bigger drop in the second quarter, this time on another target down the field. Roethlisberger found him amidst zone coverage in a hole, and he went up to get the ball, but he was unable to secure two hands on it. It ultimately trickled through and bounced off his facemask, where he lost control.

But Roethlisberger is a quarterback who is going to keep coming back to his guys no matter how many mistakes that they make. Rogers got another shot early in the second half with the offense looking at third and six. Crossing the middle from the right slot, he ran a nice route and Roethlisberger threw him open in stride for 11.

One can’t help but wonder if there is some correlation between Rogers’ playing time and his seeming lapses in focus. But that is an unavoidable problem when all are healthy, as Smith-Schuster has certainly proven to be the better option.