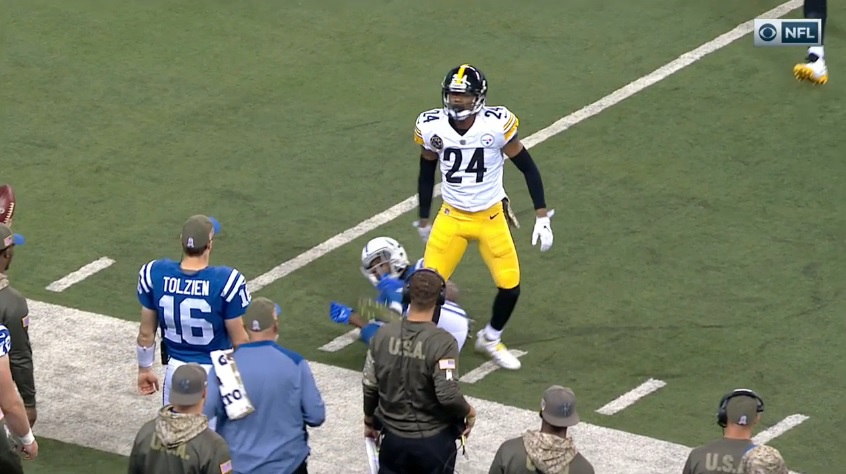 Coty Sensabaugh is no stranger to the NFL. He’s a veteran who has played all over the country, one aspect of his game that made him attractive to the Pittsburgh Steelers. But according to him, he hasn’t had a better DB coach than Carnell Lake. That’s what he told Missi Matthews in their sit down interview posted to team site earlier this week.

“He’s been awesome,” Sensabaugh said of Lake. “This is my sixth year and I feel like he’s the best DB coach I’ve ever played for. I’ve enjoyed every moment with him. He played the game at a high level. He coaches at a high level. He expects excellence out of us. And we just try to give it back.”

It wasn’t long ago that Lake was on the chopping block, by the fan base at least. Some of that frustration was justified but when given top talent, namely Artie Burns and Sean Davis, who are both looking like worthwhile picks (both still a work in progress but they’re improving).

The fact that the draft pick misses didn’t do anything in life after Pittsburgh – Terrence Frederick, Shaq Richardson, Gerod Holliman – seems to put the blame more on the scouts and decision-makers than Lake himself. Lake has also helped mold Mike Hilton from UDFA castoff to quality starter.

Sensabaugh has been a fine addition and made a splash play in his first start against the Tennessee Titans, picking off Marcus Mariota and returning it deep into Titans’ territory. He credited spending his final year with Mariota for being able to make the play.

“It was crazy because my last year at Tennessee was his rookie year. And I remember before practice and after practice, I would catch passes from him as much as I could. And I was like, ‘man, this is going to come in handy.’ I didn’t know when it was going to be. But it came in handy the other night. And it was even better that we won.”

Sensabaugh fit the mold of what the Steelers’ targeted in free agency and the draft. Hard working, high character guys. Sensabaugh and his wife are active in the community and abroad. In 2016, he spent five days in Haiti to distribute shoes for the kids. And he’s been active in bringing clean water to the country, a place ravaged by Hurricane Matthew a year ago and though they didn’t take a direct hit from Irma, still felt its fury.

On the field, though that is far less important, Sensabaugh’s mantra has been consistent. In most interviews he gives, including this one with Matthews, he mentions just wanting to help the Steelers get to the Super Bowl. They’re 8-2 and on track to have a puncher’s chance of getting there.