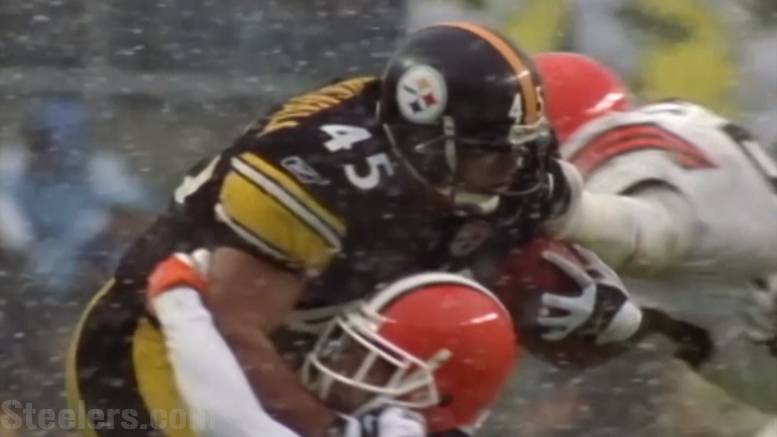 If you are a big back, then Pittsburgh is not a bad place to be drafted. At a bare minimum, you know that you are going to have a large segment of the fanbase rooting for you, simply because they love the idea of a boulder of a man imposing his will on a defense.

That is what Jerome Bettis was, and what Chris Fuamatu-Ma’afala aspired to be under the Hall of Famer’s tutelage when the latter was drafted by the team in 1998, playing for the organization through the 2002 season.

While the Hawaii native finished up his career with two seasons in Jacksonville, and now resides in his home state, Pittsburgh still means the world to him, and helped shape who he is, as he communicated during an interview with the team’s website recently.

Describing a time during his rookie season when he pulled up to the stadium embarrassed by his beat-up old car, only to be greeted by cheers of ‘Fuuuuuuuu’, he said, “I realized the fans weren’t about that glamorous stuff, they were about the hard working guys who brought their lunch pail to the game. I definitely adopted the city, their mentality and tried to do that every time I took the field”.

Not that it was easy for him to get on the field with Bettis in front of him, whom he looked up to. “When I got here I shared with him some of the stories, the runs he did in college”, he said. “He was like this guy knew his details. Learning from him, the ins and outs, what to watch for, the game in general. Jerome Bettis was that guy”.

Fuamatu-Ma’afala said that Bettis was “welcoming” right off the bat. “I am trying to compete for his spot. I did everything I could to try and dethrone ‘The Bus’”, he said. “But that guy was awesome. All of the leaders. They were all about team, one goal. I didn’t have that when I left it. It’s totally different in other organizations. It’s not the Pittsburgh way. We miss The Burgh”.

While he said that he knew his role—“we had Jerome Bettis starting. I knew my role would be to make something happen on special teams”—, he did get to carry the ball 120 times during the 2001 season. For his career, he recorded 227 carries for 964 yards, averaging 4.2 yards per carry, with eight rushing touchdowns. He also had two receiving touchdowns.

“I would do whatever it took”, he said of his efforts to try to stick with the team. “I adopted the mentality of the fans and the city, working hard trying to make a living”.

Unfortunately, Fuamatu-Ma’afala was released during roster cuts heading into the 2003 season, losing out to Verron Haynes, among others, to back up The Bus. But he will never forget Pittsburgh, and I’m sure many in the city feel the same about him. After all, he has a name that is equally hard to remember and forget.