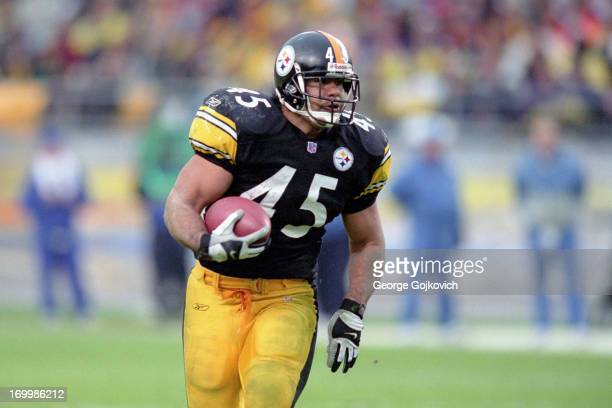 Near the tail-end of one of the better regular seasons in franchise history, the Pittsburgh Steelers found themselves in a bit of dire straights in the backfield two days before Christmas.

Future Hall of Fame running back Jerome Bettis was scheduled to sit out his third consecutive game late in the 2001 season, leaving the Steelers periously thin at the position under head coach Bill Cowher. Amos Zereoue did a nice job stepping up in his place, but fourth-year running back Chris Fuamatu-Ma’afala emerged as the lead back on December 23, 2001 at Heinz Field against the lowly Detroit Lions.

On a rather cold day just two days before Christmas, Fuamatu-Ma’afala  — a sixth-round draft pick in 1998 out of Utah — had the best game of his career in the NFL, rushing for 126 yards on 26 carries and adding two catches for 53 yards in a 47-14 romp over the 1-12 Lions, giving Steelers fans a very Merry Christmas overall.

Right away against the Lions at Heinz Field that day, it was clear the Steelers were the far superior team and were going to bludgeon the Lions under head coach Marty Mornhinweg.

That’s where Fuamatu-Ma’afala stepped in.

The Steelers had a lot of success early against the Lions running draws with fullback Jon Witman lead blocking behind the left side of the offensive line, with future Hall of Fame left guard Alan Faneca and left tackle Wayne Gandy out in front.

Leaning on Fuamatu-Ma’afala early allowed the Steelers to really wear down the Lions’ defense, which became very apparent early in the game. That will happen with a team that is also 1-12 and eyeing the offseason days before Christmas. Fuamatu-Ma’afala really looked good in this one though, showing off some serious physicality working downhill, dishing out some blows late in runs like he does here.

One thing the Steelers and offensive coordinator Mike Mularkey did a good job of doing against the Lions in the 2001 matchup was getting Fuamatu-Ma’afala in space on quick tosses, allowing him to use some of his speed to chew up yardage and then ram his way through defenders at the end of runs, really demoralizing Detroit, like this 11-yard run on a toss play designed for off right tackle.

Of course, the Steelers also mixed in a screen to Fuamatu-Ma’afala and it was a thing of beauty. Fuamatu-Ma’afala showed just who he was with the football in his hands on this 54-yard catch and run (he lost a yard on his other catch), running through at least four would-be tackles for the explosive play.

He was a rare display of athleticism and grace in space at his size, which is really what the Steelers liked about him coming out of college in 1998, especially with Jerome Bettis on the roster. Seeing him gallop like this in space and make defenders miss this easily is incredible to see once again.

Finally, late in the game the Steelers got Fuamatu-Ma’afala the football in space one again, all but sealing the win.

I genuinely love the excitement here from Fuamatu-Ma’afala after converting on a 4th and 4 in the fourth quarter. He was an absolute load and was very passionate about football. This run helped cap off his career day, one that lives in Steelers’ lore forever.

After his breakout game, Fuamatu-Ma’afala never came close to replicating that success again, spending just one more season with the Steelers in 2002 before being released on August 31, 2003, signing with the Jacksonville Jaguars three days later, where he spent his final two seasons in the NFL.

It’s still great to hear those “FUUUUUUUUUU” chants again all these years later.