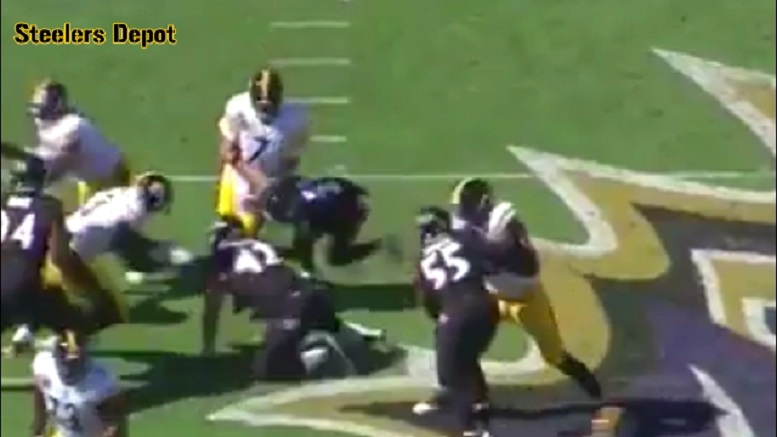 On Sunday, you probably almost choked on your beer or swallowed your gum when Baltimore Ravens outside linebacker Za’Darius Smith was flagged for unnecessary roughness on Pittsburgh Steelers quarterback Ben Roethlisberger with 5:18 left in the third quarter of the AFC North battle.

In case you missed it, Smith was flagged for hitting Roethlisberger in his helmet while attempting to rush the quarterback and you can see that replay below.

While that penalty was rightly called and will likely result in Smith being fined by the league this week, you have to wonder of if Ravens cornerback Laderius Webb might ultimately have his weekly game check docked as well.

In the first quarter of Sunday’s game, Webb blitzed off the edge and after Roethlisberger flipped the football forward to running back Le’Veon Bell, the Ravens cornerback hit Roethlisberger low-ish. Roethlisberger fell to the ground awkwardly after the hit and thankfully wasn’t injured.

While the television view of Webb’s hit on Roethlisberger wasn’t very revealing, the end zone view of the coaches tape certainly makes the low hit look kind of questionable. Even so, while Webb’s low hit was probably lower than it needed to be, it appears as though he made initial contact above Roethlisberger’s knee.

Webb, by the way, wasn’t flagged for his hit so there is that. However, that still doesn’t mean he still can’t be fined after the fact just the same. Personally, I’ll be surprised if Webb is ultimately fined for that low hit.

Perhaps Steelers head coach Mike Tomlin will be asked to comment about this hit by Webb on Roethlisberger during his Tuesday press conference.