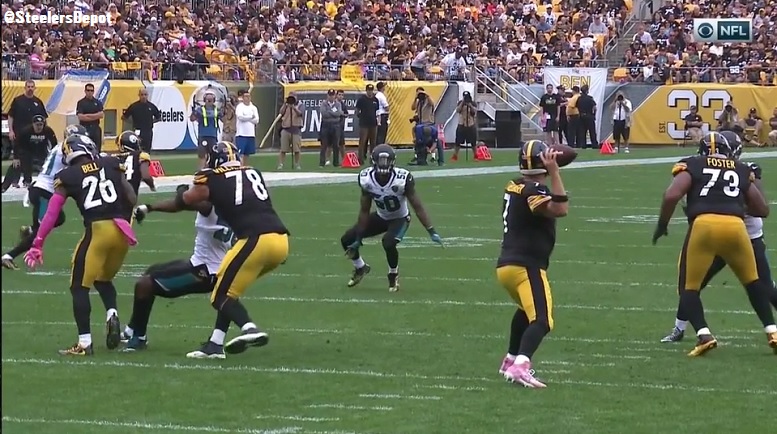 In a day where the Pittsburgh Steelers lost to the Jacksonville Jaguars by a final score of 30-9, there is much to discuss when trying to pinpoint what exactly went wrong.  Although the offense continued its mediocre play, the defense played well enough to kept the Steelers in the game throughout the first 40 minutes.

With just under 7 minutes remaining in the third quarter, Ben Roethlisberger attempted to hit Antonio Brown on the left side hash mark.  Jaguars Defensive lineman Abry Jones tipped the pass at the line of scrimmage and the ball deflected right into the arms of linebacker Telvin Smith, who was able to change direction quickly and return the interception 28 yards for a touchdown.  The Jaguars took the lead with this interception 13-9 and would not look back.

The following possession, Roethlisberger would again attempt to get the ball to Brown, but once again a timely deflection would result in an interception with about 4 minutes left in the 3rd quarter.  This time, Jaguars cornerback Jalen Ramsey would tip the ball away from Brown’s hands and the deflection went right to safety Barry Church.  Church, a local Pittsburgh native, would then return the interception 51 yards untouched for another touchdown putting the Jaguars ahead 20-9.

This three-minute sequence of events proved to be the main turning point in the game as the Jaguars were able to turn a two-point deficit into an 11-point lead without their offense even taking the field.  For the Steelers, this moment signaled the end of any hopes of gaining second half momentum and getting the offense rolling. The following offensive possession ended with a sack of Roethlisberger and the offense would finish the game without ever being able to gain any traction.

By the time the final whistle blew, Roethlisberger had thrown a career-high 5 interceptions.  The Jacksonville defense now has 15 takeaways on the season.  To add some perspective, they have already surpassed their final 2016 number of 13 takeaways.

The Steelers will look to bounce back next week as they travel to Kansas City to take on the Chiefs at 4 pm EST.  The Chiefs will look to get revenge as Pittsburgh posted a 2-0 record against them last season.  The Steelers had an impressive 43-14 victory over the Chiefs in the regular season, as well as an 18-16 victory in the AFC Divisional Round to end Kansas City’s season.