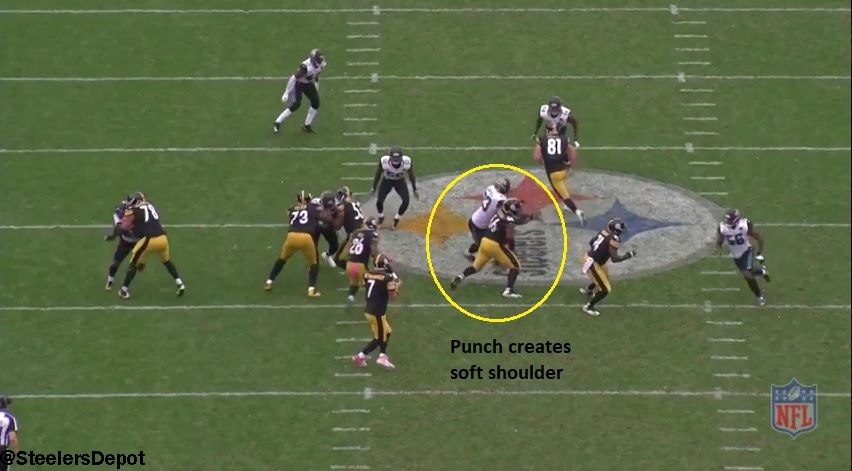 Back at it breaking down the pair of sacks the Pittsburgh Steelers allowed to the Jacksonville Jaguars in their Week Five loss.

Slant/flat concept that frankly, has gotten this team into trouble the last two weeks. Read is Antonio Brown (slant) and Le’Veon Bell (flat). But the Jags’ safety buzzes down to take Bell in the flat, the playside linebacker (usually the read for the QB) doesn’t widen that would’ve opened up the flat, and the CB, realizing the concept, matches Brown over the top.

Simply put, to the read side, there’s nothing there for Ben. But that doesn’t stop him from staring it down and wanting to hit Brown on the slant. Pulls back to throw it before finally, smartly, deciding against it. 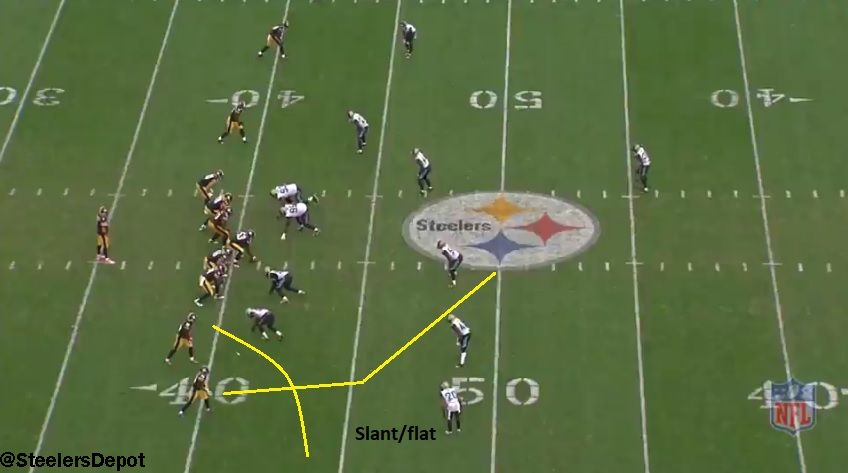 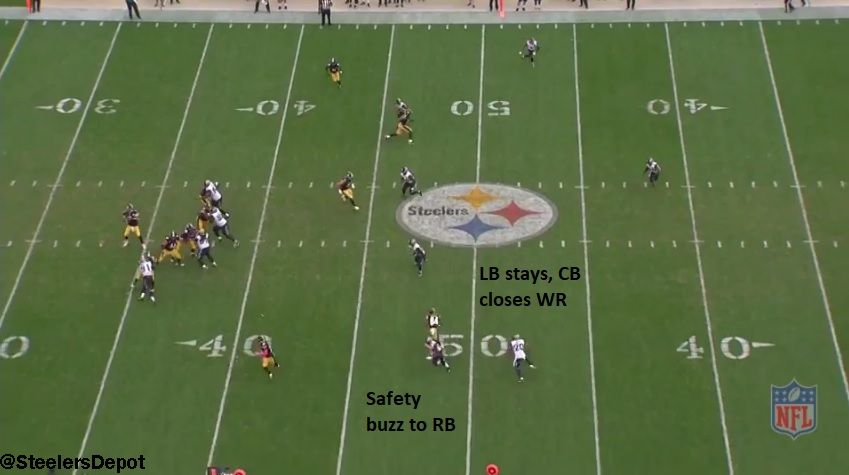 As he’s looking to come across to the next part of his progression, an open Martavis Bryant in the flat, the pressure comes and Roethlisberger gets dropped. 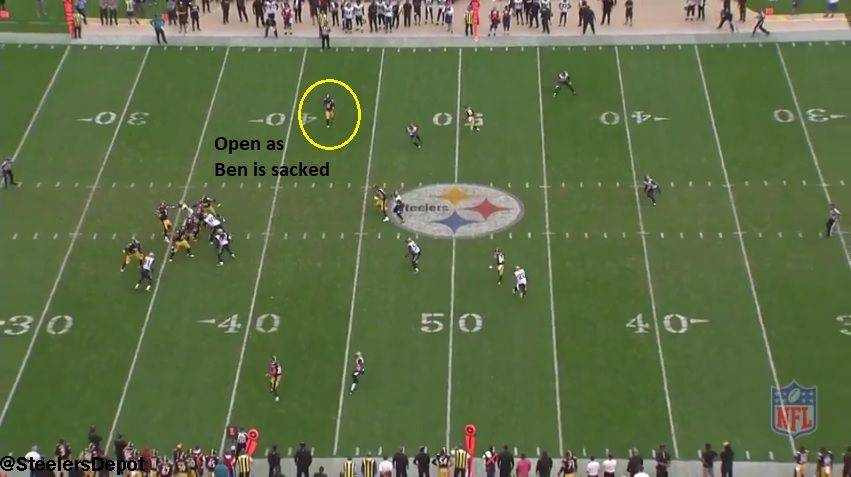 That pressure was allowed by Alejandro Villanueva. He’s played better as of late, mainly because he’s been more aggressive in pass protection (getting healthy and his strength/weight back sure helps, too). His go-to move in pass pro is his chop, knocking down the hands/wrists of the defender and he has the play strength to take his man to the ground. Like here on a different play.

Villanueva handling speed rushes better. Not trying to catch. Back to being aggressive. Has one of the nastiest chops of any OT. pic.twitter.com/g8N5Y7tQ1B

But there’s always a risk/reward to it. Defenders have learned to anticipate it and counter. That’s what happens here. The end crashes down, Villanueva tries to chop, but Calais Campbell swims over the top. Now Villanueva isn’t able to use his hands and gets beat to the inside. 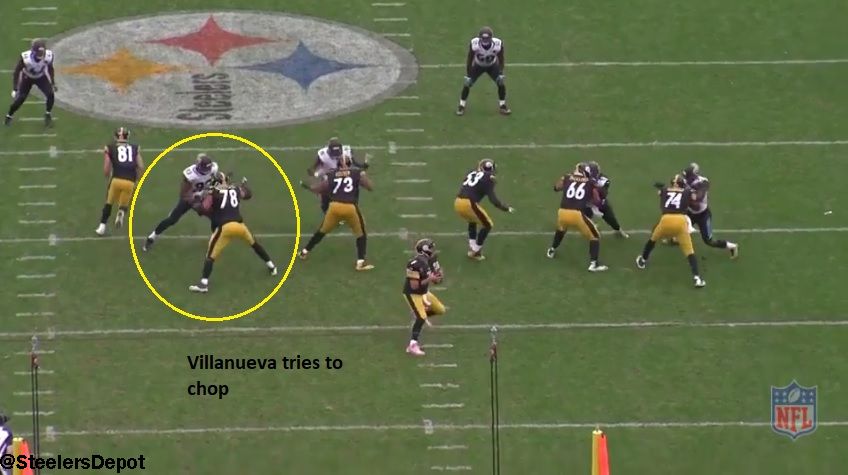 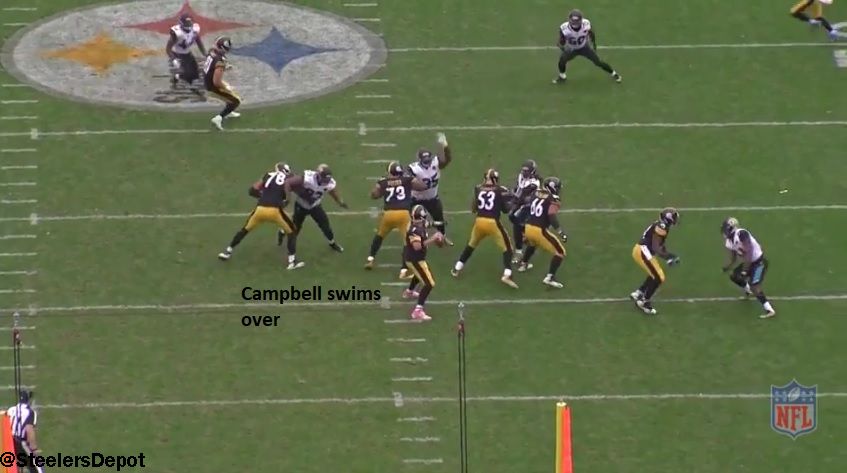 And down goes Ben.

In empty, it’s disappointing that Roethlisberger isn’t quickly growing through his reads. There are three other options on the play and it highlights one of several issues of him struggling mentally. But Villanueva flat out got beat too, so both are to blame.

Blame: Half on Roethlisberger, half on Villanueva

We’ll show you the sack from the aerial/end zone views.

To put it simply, David DeCastro gets beat here. Biggest coaching point for Mike Munchak is keeping your shoulders square. Good punch by the DL gets DeCastro to give a soft shoulder to the inside. Unable to reset and mirror and the defender gets interior pressure. 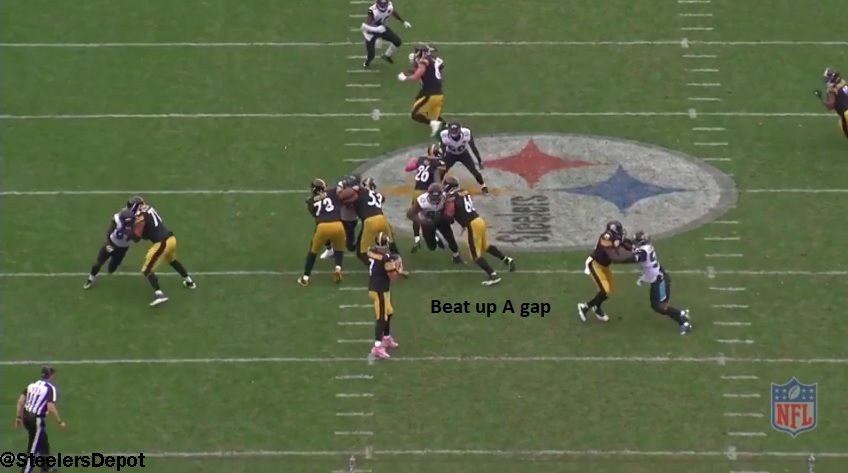 Ultimately, Roethlisberger gets away from him and tries to climb the pocket. But changing his launch point lets the LDE shed Chris Hubbard, there’s really nothing Hubbard can do except for holding, and gets taken down.

Jacksonville has good coverage on this one. Cover 1, no one open. In fact, here’s what Ben is looking at right before he goes down. 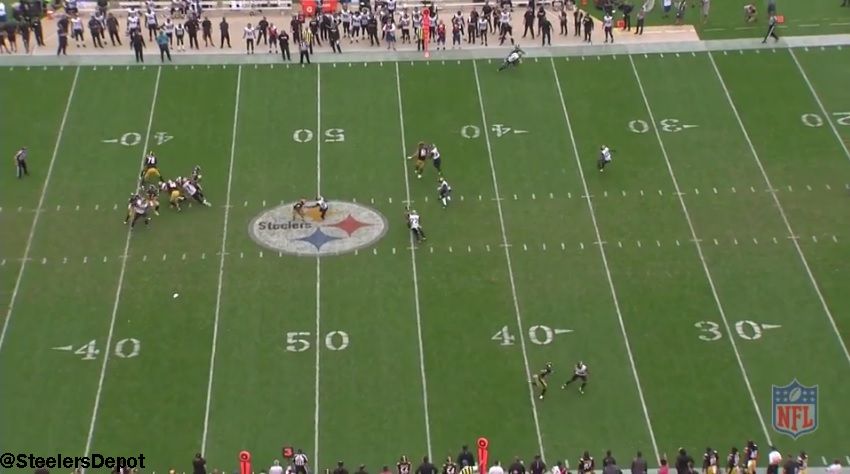 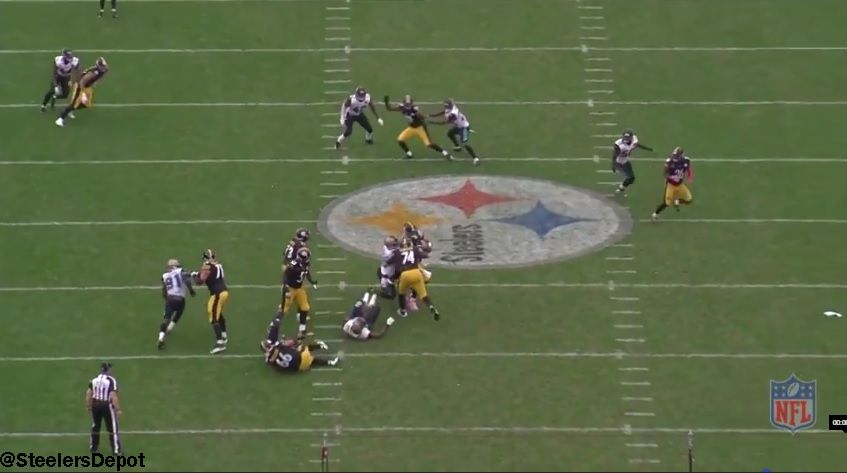 Yeah…nothing there. Is it a coverage sack? Well, it takes about 2.25 seconds until DeCastro allows the pressure and about 3.15 until the sack. The average NFL sack takes over four seconds. So you could argue there isn’t enough time for things to develop.

Ultimately, I’ll give half to the receivers not getting open and half on DeCastro for allowing the initial pressure that created the sack.

Blame: Half on receivers, half on DeCastro