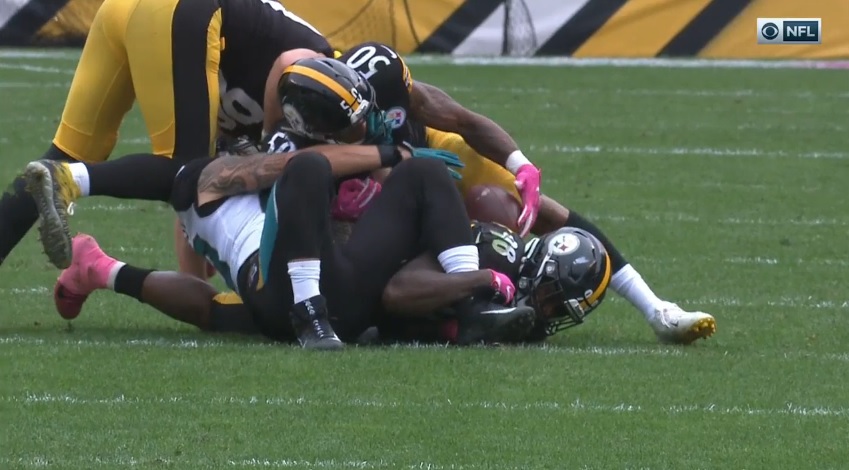 Like clockwork, the Pittsburgh Steelers played down to their opponent on Sunday, dropping an immensely disappointing 30-9 decision Sunday to the visiting Jacksonville Jaguars as Ben Roethlisberger self-imploded, while the run defense fell apart in the second half, allowing the Jaguars to put the game away for good.

Much like the loss to the Chicago Bears two weeks ago, the Steelers played down to their opponent and struggled to stop the run. Just as Mike Glennon completed just nine passes, Blake Bortles completed only eight on Sunday.

Sitting at 3-2, the Steelers have a lot of work to do before next Sunday when they travel to Arrowhead for a showdown with the Kansas City Chiefs.

I’ll take a shot at grading the position groups. This one might get ugly.

I don’t know any other way to put it other than Ben Roethlisberger played the worst game of his career on Sunday.  Five interceptions, a number of ill-advised throws towards standout cornerback Jalen Ramsey and some really awful audibles into plays that simply weren’t going to work. The throw to Antonio Brown in the left corner of the end zone in the third quarter comes to mind.

Last week, I had a few commenters say I was pushing an agenda about Roethlisberger being below average to start the year. Well, folks:  it’s time we have a serious discussion about Big Ben maybe not being that upper echelon quarterback anymore.

Five interceptions, two of which were pick-6’s is tough to overcome for any quarterback. Ben’s first and fourth picks weren’t truly on him as James Conner missed the blitz pickup on the first attempt, while JuJu Smith-Schuster was tripped up by Aaron Colvin in coverage. But the other three were just atrocious.

Roethlisberger didn’t even see Telvin Smith drop right into the throwing window on the first pick-6, regardless of if that ball was tipped or not. It was slightly deflected, but Smith was getting his hands on a clean pass.

On Barry Church’s pick-6, Roethlisberger threw high for Brown in triple(!!) coverage, forcing Brown to try and got up to get the ball. That’s not his strength, and Ramsey was able to bat the ball right to Church.

Aside from Roethlisberger’s poor play on Sunday, one Todd Haley has to be called into question, considering the Steelers threw the ball 55 times(!!!) against the best pass defense in the NFL, running the ball just 20 times against one of the worst run defenses in the league. On a day where Ben clearly didn’t have it, Haley simply didn’t protect his guy.

It won’t get any easier next week on the road in one of the hardest places to play in the league.

One week after touching the ball 39 times for 186 yards and two scores, the Steelers seemingly moved away from Le’Veon Bell early in the second quarter despite the star running back getting into a groove on the ground against the Jaguars.

Again, the Steelers got away from running Bell in goal-to-go situations, resulting in three red zone field goals, which won’t beat anyone in this league.

Bell finished with 47 yards on 15 carries (3.1 ypc; not great, I know) and added 46 yards on 10 catches, but he wasn’t used anywhere remotely close to how he was one week ago in a thrilling win on the road.

Sometimes, I think this coaching staff overthinks how to attack defenses, which has resulted in an exceptionally slow start offensively for the Steelers through five weeks.

If this were a grade strictly for Antonio Brown, he’d get an easy A. Every time the Steelers’ best player was matched up with Ramsey in coverage, Brown cooked him. But when Ramsey wasn’t matched up with Brown, he was simply dominating every other wide receiver on the day.

Martavis Bryant finished with just five catches for 21 yards, two of which came in garbage time, while Smith-Schuster with four catches for 58 yards, including a tough catch up the seam through contact.

Brown was dominant again, hauling in 10 for 157, but this group aside from Brown really struggled to do anything offensively.

Justin Hunter added one catch for 6 yards for the second straight week, but he had a second target from Roethlisberger where neither were on the same page. Maybe it’s time for Eli Rogers to get a hat again?

Another average performance by the tight end group, which is about all you can ask for right now.

Jesse James finished with three catches for 24 yards and was mostly irrelevant in the red zone, while Vance McDonald was targeted twice in the loss. The first target resulted in an interception by Ramsey after Paul Posluzny hit Roethlisberger just as he threw thanks to a missed blitz-pickup by Conner.

Yes, the starting offensive line allowed two sacks and a number of batted passes at the line, as well as a couple of pre-snap penalties and a holding call on David DeCastro that wiped out an Antonio Brown touchdown, but for the most part this unit held up well against a great front seven for the Jaguars.

At one point in the first quarter the Steelers were really taking it to the Jags’ front seven on the ground, but again, Haley moved away from the run game, forcing Ben to take to the air.

I felt that Alejandro Villanueva did well against stud pass rusher Yannick Ngakoue, while Ramon Foster and Maurkice Pouncey stood tall against Malik Jackson, but Chris Hubbard struggled at times with Calais Campbell.

DeCastro needs to cut down on the penalties this season, because all he’s doing is hurting the team, stalling possible drives. Marcus Gilbert’s return should provide a big boost.

Aside from Javon Hargrave, who was outstanding on Sunday, the Steelers’ defensive line wore down in the second half, leading to the Jaguars pounding the rock down the Steelers’ throats to close out the game.

Cam Heyward and Stephon Tuitt were mostly quiet on the day, combining for just four stops and very limited disruption in the backfield, while Tyson Alualu — playing against his former team — made an impact as a rotational piece, racking up four tackles, including a big one-on-one stop against Leonard Fournette in the first half.

Hargrave led the Steelers with 10 tackles on the day, proving to be a serious disruptor along the interior for the Jags’ run game.

Much like the defensive line, the Steelers’ linebacking corps was good in the first half, but the physical Jags run game wore them down in the second half.

Ryan Shazier and Vince Williams played so well in the first half as Shazier came through with an incredible effort on his interception, while Williams added a sack, but in the second half the Jags just lined up and ran right down their throats.

Will against will, and the Jags’ will won.

Shazier and Williams did finish with eight tackles each, but it just wasn’t enough defensively.

Outside linebackers TJ Watt and Bud Dupree struggled against the run at times, which came into play in the second half as the Jags ran wide zone plays to stretch the Steelers’ defense.

Watt did add a sack and two tackles for a loss, providing some havoc in the backfield, but Dupree was very quiet on the day, recording just one tackle, which was discouraging.

As I said earlier, the Jags didn’t really test the Steelers’ secondary much, simply because they didn’t need to thanks to a great run game and a heroic effort by Jacksonville’s defense scoring two touchdowns.

I know people are upset with Mike Mitchell for his emotion, but the defense thrives off of that. It clearly didn’t work on Sunday, but Mitchell is who he is, and he was trying to get the defense going. He was one of the few who showed up on the day mentally.

Mitchell and Sean Davis were good in run support, outside of Fournette’s 90-yard touchdown (I’ll have to take a closer look at that once coach’s film comes out).

Artie Burns and Joe Haden were rarely tested, but both seemed to do well supporting the run on the day.

Hard to fault the secondary on a day when the Jags attempted just 14 passes, completing just eight.

Just like the secondary, it’s hard to fault the special teams on Sunday as Chris Boswell came through every time he was called upon, nailing all three field goals. Punter Jordan Berry averaged nearly 45 yards per punt on three attempts, pinning the Jags deep on two of the three.

Kick return continues to be a mess as Smith-Schuster and Conner aren’t much of a threat deep, while the Jags did a nice job on Sunday of bottling up Brown on punt returners.