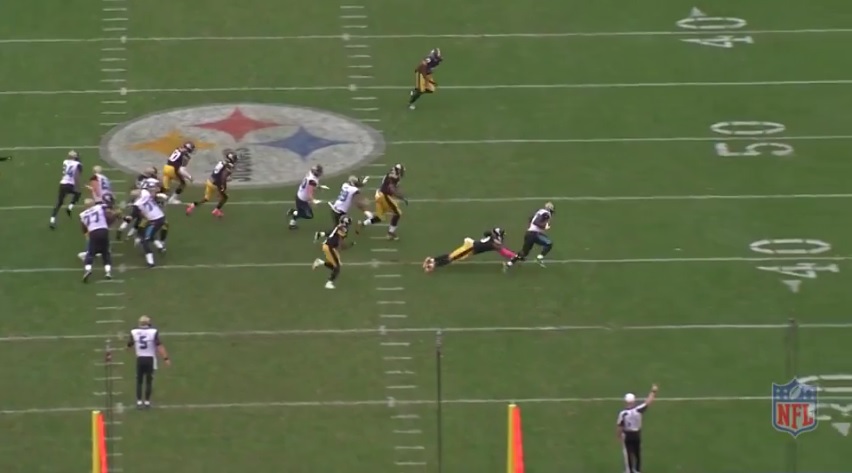 For the second straight week the Pittsburgh Steelers’ defense turned in a solid performance in the tackling department, but this time, the Steelers came up short in the win column, dropping an embarrassing decision to the Jacksonville Jaguars, 30-9, Sunday afternoon.

Last week against the Baltimore Ravens, the Steelers missed just 12 tackles in a 26-9 win. Despite dropping a decision to the Jaguars, the Steelers actually improved in the tackling depart in Week 5.

As I mentioned earlier, the Steelers actually improved from Week 4 to Week 5 in the tackling department despite turning in a poor game elsewhere.

Second-year cornerback Artie Burns missed his first tackle of the season, while Ryan Shazier continues to lead the Steelers in missed tackles week after week, but I think a lot of that has to do with the standout inside linebacker flying sideline to sideline making plays.

Aside from Shazier and Burns, none of the missed tackles on Sunday against the Jaguars resulted in splash plays for Jacksonville, but Bud Dupree’s did lead to a run by Leonard Fournette that people are still talking about today, where the rookie waved on Mike Mitchell for contact in the open field.

Now, let’s take a look at some of the misses.

One the first play of the second series of the game for the Jaguars, Blake Bortles swings the ball out to his left on a short dump off to Fournette in space against fellow first-round pick, TJ Watt.

Although Fournette isn’t as elusive in space as some other backs in the NFL, the Jaguars do a great job of getting him the ball in space quickly early in the game.

Watt is in perfect position, but he’s off balance a bit and doesn’t attack Fournette once the big, bruising back catches the ball, allowing Fournette to eat up the yards between the two, dictating the meeting in the open field.

Fortunately for Watt, he’s able to force Fournette towards the sideline for a minimal gain despite missing the tackle.

This was one of the few plays on Sunday where Mitchell wasn’t aggressive coming up in the run game to drop the hammer on Fournette. While I’m sure Mitchell was guarding against the splash play run here, he nearly gave it up by coming up into the box tentatively, hoping to wrangle Fournette to the ground from up high.

You’ve all likely seen this run a number of times since Sunday as Fournette waves on Mitchell for a collision in the open field, but this play likely doesn’t make the highlight-reel loops if Dupree sets the edge correctly and doesn’t go diving at ankles against a power back like Fournette.

Against the Jaguars, Dupree was rarely heard from, aside from this play right here. That’s never encouraging. The third-year linebacker needed to assert himself against the Jags in run defense, since Jacksonville took the air out of the ball.

Overall, the Steelers defense did a nice job of stopping the run at the initial point of attack. That didn’t matter in the end though as the Jaguars still rushed for 231 yards in the win.

But if there’s any semblance of positivity from Sunday’s game, it has to come from the improved tackling.