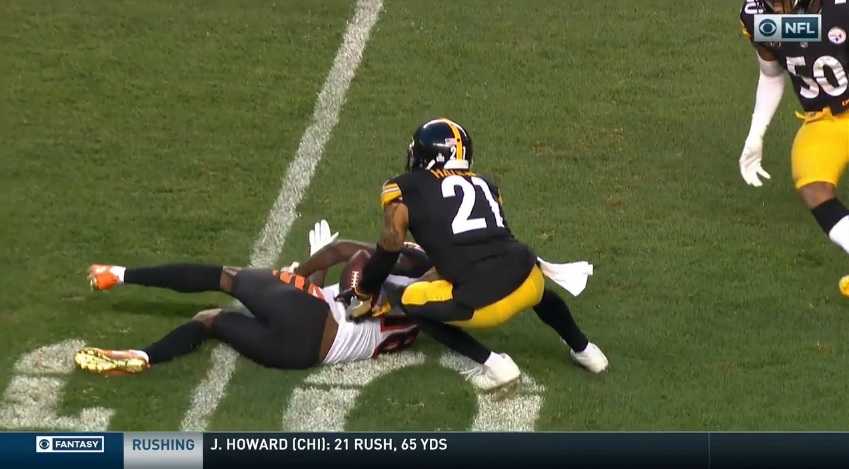 For the second straight week, the Pittsburgh Steelers dominated in all phases of the game, rolling to a 29-15 over the rival Cincinnati Bengals at Heinz Field, giving the Steelers the clear No. 1 seed in the AFC.

Ben Roethlisberger had a terrific bounce back game, while Le’Veon Bell, Roosevelt Nix and the Steelers’ offensive line dominated on the ground, but it was the defense that stood tall on the day, intercepting Andy Dalton twice and holding the Bengals to just 19 second-half yards in the win.

Like I do following each game, I’ll take a shot at grading each position’s performance in the game.

As I said above, Roethlisberger was terrific early on, allowing the Steelers to have a balanced attack, hooking up with Antonio Brown and JuJu Smith-Schuster for touchdowns. Roethlisberger probably should have had a third touchdown pass to Vance McDonald, but the veteran tight end dropped the would-be touchdown in the back of the end zone.

While Bell dominated on the ground and the Steelers took it to Cincinnati in the run game, Roethlisberger took advantage when he needed to through the air, finishing with 224 yard and two touchdowns on just 14 completions.

Overall, Ben put together a vintage performance when asked to throw, fitting some impressive throws into some tight windows, threading the needle quite often. That’s great to see as the run game gets rolling and the defense turns up the heat each week.

Roethlisberger does struggle to connect on deep balls, but I have a feeling those are going to start clicking in a big spot.

Bell continues to be the workhorse the Steelers need in the run game, as the star running back finished with 134 yards on 35 carries, helping the Steelers simply take over the game in the second half, eating up large chunks of the clock.

Against a good front seven for the second straight week, Bell started early and simply wore down the Bengals on the day, but the most important thing is that Bell came out of the physical rivalry healthy for the first time in awhile, which is great news.

Through the air, Bell finished with three catches for 58 yards, including a ridiculous 42-yard catch-and-run where he shook a linebacker near the first-down marker before stiff-arming Dre Kirkpatrick to the ground with a mighty right arm in what will undoubtedly be a highlight reel play for the rest of the season.

Behind Bell, rookie James Conner came on late and helped close out the game, finishing with 19 yards on three carries, while Terrell Watson saw his perfect streak of short-yardage conversions come to an end on his lone carry of the game, falling just short on a third-and-1 that was originally awarded a first down before being overturned on a Cincinnati challenge.

Fullback Roosevelt Nix deserves a ton of credit for Bell’s big day as well. The second-year fullback is a load in the run game, and some of his meetings with Vonteze Burfict in the hole were legendary today. He’s playing at an All-Pro level right now, and that shouldn’t be a surprise.

Brown and Smith-Schuster both scored impressive touchdowns Sunday, but overall the receiving corps was quiet today. Granted, that might have a lot to do with the Steelers running the ball at will against the Bengals, but nobody in the receiving game had a huge day.

Brown finished with four catches for 76 yards and a score, while Smith-Schuster added two catches for 39 yards, including his wide-open 31-yard touchdown in the first quarter.

After a reported trade request was denied and a promised increase in usage offensively, Martavis Bryant had just two touches for a total of five yards, including a catch for three yards and an end around for two yards. Safe to say his role is slipping further and further behind Smith-Schuster.

Eli Rogers added one catch for 10 yards in the first half, but the play of the day might have been Darrius Heyward-Bey’s 44-yard catch-and-run on a fake punt pass from safety Robert Golden that all but sealed the win.

Vance McDonald stepped up in the passing game, hauling in two passes for 37 yards in the win, but he left a touchdown on the field in the second quarter, dropping a back-shoulder throw from Roethlisberger that should have been a touchdown to put the Steelers up 21-14. Instead, the Steelers had to settle for a field goal.

Drops have been an issue for McDonald, none bigger than that one this season.

Besides the drop, McDonald blocked well in the run game before exiting with a knee injury. I’m not sure he came back despite being probable, but I could be wrong.

Jesse James didn’t see a single target in the game, and didn’t really stand out in the run game as a blocker, but Xavier Grimble stepped up as a pass catcher, hauling in a 12-yarder in the third quarter that was just a foot shy of the first-down marker. He did have a nice block to spring Bell in the second half and seems to really be improving in that area.

No offensive penalties in this game, which is the first time that’s happened in awhile for the Steelers, which played a part in the win.

This unit up front helped the Steelers rush for 153 yards on 42 carries (3.5 ypc) , which might not look great in the box score, but the starting offensive line dominated on Sunday. As Bell and Conner ran all over the Bengals, the starting unit — minus Marcus Gilbert — didn’t allow a single sack on the day and gave up just one hit on Ben Roethlisberger in the win.

David DeCastro really stood out in this one, helping Bell get going on the ground as the standout guard pulled left and right and laid the boom on Bengal defenders.

You’re starting to see this unit get rolling, even with Alejandro Villanueva having his own personal struggles on Sunday, struggling with Carl Lawson in pass protection and allowing Michael Johnson to shoot across his face into the backfield for a big tackle for loss on a 3rd and 1 run in the second half.

No Stephon Tuitt, no problem for the Steelers’ defensive line in this one.

Despite rookie Joe Mixon racking up 48 rushing yards on seven carries, the Steelers’ defensive line reeked havoc on the Bengals all game long as Tyson Alualu and Cam Heyward recorded sacks in the win, while Javon Hargrave was a menace in the middle of the line throughout Sunday’s matchup.

The trio in the trenches combined for 11 tackles, three tackles for loss, two sacks and three quarterback hits in the win. Not bad, not bad at all, fellas.

At times this group struggled with run fits early on, but in the second half this unit played a critical part in holding the Bengals to just 19 second-half yards.

TJ Watt and Bud Dupree were forces on the edge, giving Dalton plenty of issues in the pocket, while Ryan Shazier flew around all day long.

Watt and Dupree recorded one sack each, while the duo combined for nine tackles and three quarterback hits, but it was Shazier who led the Steelers with eight tackles on the day, including one tackle for loss.

Vince Williams was quiet on the day, finishing with just two tackles in the win, but he did pancake Giovani Bernard on a blitz, similar to last week in Kansas City, but Williams was unable to bring down Dalton in the pocket.

LJ Fort and Tyler Matakevich blew a goal line package play, allowing Tyler Kroft to slip behind them for a touchdown in the first quarter. That’s the second time this season Matakevich has gotten caught on play-action along the goal line allowing a tight end to slip behind him for a score. He has to tighten that up.

How can you really hate on this group after the performance Sunday against the Bengals?  After allowing three catches for 41 yards in the first quarter to AJ Green, the star Cincinnati receiver didn’t catch another ball the rest of the game as Joe Haden and Artie Burns simply shut him down.

In fact, Golden had more passing yards in the second half on the fake punt than Dalton had in the entire second half as Haden came up with his first interception as a Steeler, while William Gay added one pick of his own.

Safety Sean Davis was very solid against the Bengals, providing serious physicality, while also helping Gay come up with his interception by breaking on the ball in the middle of the field, beating Green to the ball to tip it up into the air.

Mike Mitchell had a quiet day, which is neither good nor bad. Sometimes when you don’t hear from him that’s good for the defense. That seemed to be the case today as the Bengals gained just 179 yards on the day.

And once again, Mike Hilton continues to play impressively well, blowing up Bernard in the backfield to force an incompletion, finishing with four tackles on the day. It’s quite clear the Steelers found their starting slot man for years to come.

Hello, fake punt! Golden made the call all by himself and executed it perfectly, dropping a dime down the right sideline into the waiting arms of Heyward-Bey for 44 yards. It was a risky play, but as Bruce Arians says:  “no risk it, no biscuit.”

I’m all for risking it. You play to win the game; don’t get conservative.

Chris Boswell is the Bengals’ kryptonite, if there was ever any doubt. As the Steelers’ offense stumbled in the red zone again on Sunday, Boswell came through every time, nailing all five field goal attempts in the 29-15 win.

Punter Jordan Berry wasn’t called on much, punting the ball away twice for 90 yards, but the Steelers must do a better job in punt coverage as the coverage unit allowed Alex Erickson to bust off a 19-yard return, setting the Bengals up near midfield.