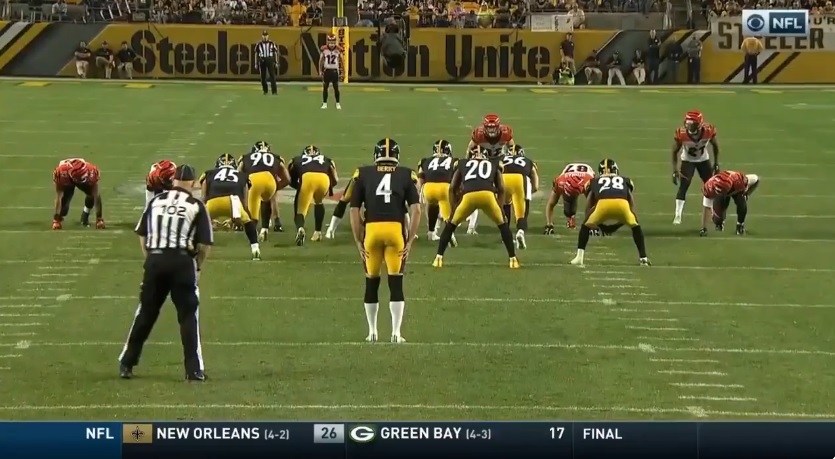 In what began as an offensive game of hide and seek, as each team searched for a defensive stop early, it was the Pittsburgh Steelers who emerged victorious. After finding themselves tied at 14 early, the Steelers scored 15 unanswered points to win 29-14 over the Cincinnati Bengals.

The first half of the Steelers vs Bengals matchup was not the offensive struggle many thought it would be. The Steelers jumped on the Bengals right from the jump as the team marched down the field and scored on their opening drive. A picture-perfect pass from Ben Roethlisberger to Antonio Brown gave the Steelers an early 7-0 lead.

The Bengals would answer back as Andy Dalton riffled a pass through the Steelers defense to Brandon LaFell to even up the score. The back and forth scoring would continue as JuJu Smith-Schuster’s 31-yard yard touchdown reception was immediately answered with another long touchdown drive by the Bengals offense.

While the Bengals tied it at 14, their defense simply could not stop the Steelers’ triple headed monster on offense. Roethlisberger enjoyed perhaps his finest performance of the season, throwing for two touchdowns and 224 yards. Brown chipped in as well, adding 65 receiving yards and a touchdown on the day.

A major reason for why the Steelers were able to pull apart from the Bengals is the play of their third offensive juggernaut, Le’Veon Bell. Just like in last week’s victory, the Steelers pounded Bell down the throat of the Bengals’ defense, punishing the Bengals into submission. Bell added 134 rushing yards and added another 58 receiving yards.

Though the Bengals would be gifted many opportunities to crawl back into the game due to the short yard ineffectiveness by the Steelers’ offense, the Keith Butler led defense made sure to turn up the heat to prevent a comeback. The Steelers sacked Dalton four times on the day with Bud Dupree, T.J. Watt, Cameron Heyward and Tyson Alualu each adding a sack to their totals.

While the offense jumped in front and the defense held it together, it was the Steelers’ special teams that iced the game. With just over six minutes remaining, the Steelers dialled up a fake punt and executed it perfectly. After receiving the direct snap, Robert Golden threw a Roethlisberger-like deep ball to Darrius Heyward-Bey, who brought it down for a 44-yard gain.

After a physical win over their AFC North rivals, the Steelers move two games ahead of the Baltimore Ravens for first place in the North. Next up for the Steelers is a road trip to Detroit next Sunday to take on the Lions, their final game before their bye week.