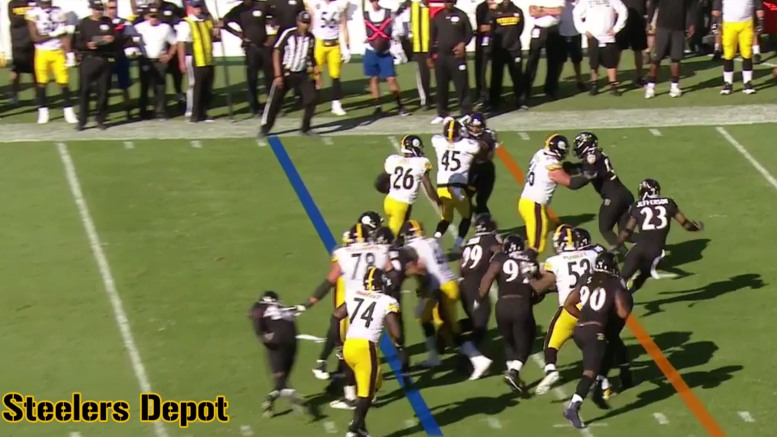 The Pittsburgh Steelers were through the first three games of the season off to a torrid pace when it came to their usage of three- and four-receiver packages on offense, easily seeing a ratio greater than three to one as compared to packages with multiple tight ends or multiple players in the backfield.

On the 12 offensive plays on which he was on the field, the Steelers managed to average eight yards per play, though that included three passing plays. Ben Roethlisberger completed two of his three pass attempts with the fullback on the field for a total of 28 yards, which boosted their yards-per-play statistic out of two-back sets.

Limiting it to just runs, however, the Steelers still averaged seven yards per play, and even that requires some massaging. While it includes both of their explosive runs on the day for 23 and 21 yards by James Conner and Le’Veon Bell, respectively, his totals also include a successful one-yard play that scored a touchdown.

The vast majority of the time, when the team did employ the fullback, they also deployed their tackle-eligible, which in this case was top interior reserve B.J. Finney, who saw 15 snaps for himself during the game in the first appearance of his career in that role. He evidently only began practicing it last week, but he had to step on for Ramon Foster during that game.

Interestingly, the Steelers did not always keep Nix in the backfield. On one snap, they lined him up as the outside slot target on the left side next to Jesse James, this a play run out of 22 personnel, a run-heavy look, that ended up being a pass.

On another snap, they lined him up as a tight end, something that I think they did only once last season. Given the scarcity of its usage, one has to wonder if they simply had the wrong personnel on the field.

Playing time for a fullback in this age of the NFL is a fickle matter that can ebb and flow with the tides of the game. The Steelers wanted to run the ball in this game, so they used the fullback more than they had, but he could easily fall back to just a few snaps a game again by Sunday.