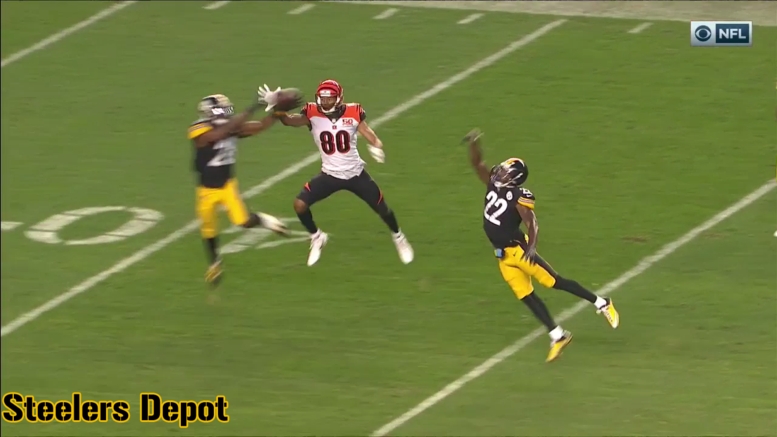 It’s nice and all to see the Pittsburgh Steelers’ cornerbacks starting to come down with some interceptions, really. Don’t get me wrong. From week four on, Mike Hilton, Joe Haden, and William Gay have all picked off an opposing quarterback, nabbing their first of the season. In Hilton’s case, the first of his career. In Haden’s, the 20th, but the first with Pittsburgh.

But all three of them required assists from other players. For Hilton, it was Ryan Shazier playing center field on a deep target, getting a hand on a high pass to bat the ball up, that allowed him to come down with the interception.

Both Haden and Gay got their interceptions off of Bengals quarterback Andy Dalton on Sunday. Haden’s came on a wide throw from Dalton looking for A.J. Green. The Pro Bowl wide receiver stretched out to try to bring it in, but only got a hand on it, deflecting it and leaving it hanging for Haden to grab—at one point right off his back.

Gay’s, too, was an assisted interception, so to speak, coming not long after Haden’s, on the next drive. Dalton was looking for his rookie wide receiver on an intermediate throw, but safety Sean Davis came up and jumped the route from behind, batting the ball up, allowing the 32-year old to nab it.

It is great—absolutely fantastic—that the Steelers’ cornerbacks have this season demonstrated an ability to be opportunistic in turning deflections into takeaways. That is a really good quality to have in your defense.

But I think I speak for at least the majority when I say that I would like to see them start to come down with more of the traditional variety. And they are not coming because of some false perception that they are playing more in man coverage and so more frequently have their back turned to the quarterback.

Overall, they have not made a ton of plays on the football, all things considered. Artie Burns made a great attempt at an interception on Sunday, jumping a short route in front of Green, but the ball was too high and he could only attempt to tip it. Those, hopefully, will come.

But with players like Burns and Haden, the Steelers are expecting to come up with more takeaways at the cornerback position. Both of them had three interceptions last season, though the latter of course did so with the Browns.

It’s still relatively early in the season, and the truth is that the Steelers have faced the fifth-fewest passes thrown against them per game. And the bottom line is that their seven interceptions are tied for the eighth-most in the league right now.

It could be a lot worse. And all interceptions are good interceptions no matter how they come. This is just a minor observation on my part, and something that I would like to see happen in the second half of the year.