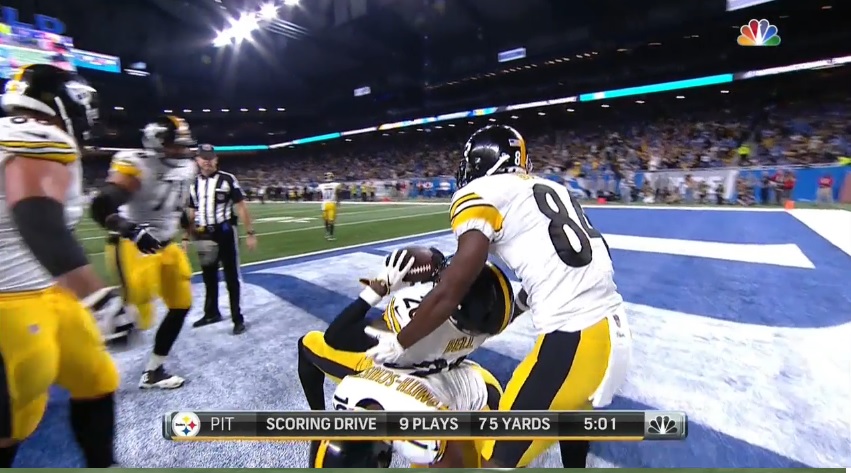 – JuJu Smith-Schuster finished the game with 193 yards. That’s the second most by a Steelers’ rookie in franchise history. Only Jimmy Orr’s 205 way back in 1958 had more.

– And oh yeah, his 97 yard TD is the longest passing play in Steelers’ history.

– The TD catch tied for the second longest TD catch by any rookie in league history. The longest won’t be broken, Marc Boerighter’s 99 yard catch and score in 2002. JuJu is tied with two guys from long ago, Jerry Tarr (1962) and Gaynell Tinsley (1937).

– The Steelers allowed the most yards ever in a game where they held the opponent out of the end zone. And by a healthy margin. Detroit racked up 482 yards of total offense, breaking the previous Steelers record of 362 in a 9-0 loss to Jacksonville back in 2006.

As you may have heard on the broadcast, it’s the third most yards allowed ever, by any team, without giving up the end zone. Only the 1994 Seattle Seahawks (496) and 1986 Washington Redskins (501) did better. Or worse. Depending on how you look at it.

– Pittsburgh is the first team since the Colts in 2012 to give up that many yards and hold the opponent to 15 or fewer points. Only the 8th time in NFL history. Most Pittsburgh’s ever allowed too. Their previous record was 469 two years ago in their win over the Arizona Cardinals.

– Le’Veon Bell fumbled away a ball for just the third time of his career.

– For the first time since 2011 and just the fourth time in his career, Ben Roethlisberger threw for over 300 yards while completing fewer than 20 attempts.

– Last one and not a good note to go out on. The Steelers’ offense has gone eight straight games to open up the year failing to score 30 points. That’s the longest such streak since 2000, when they didn’t accomplish it until the 12th game.