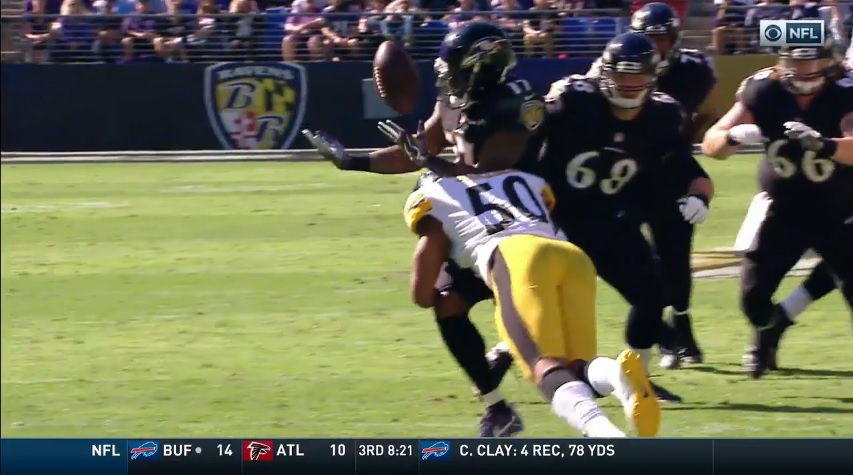 Week Three against Chicago was about as ugly as it gets. Not just in the final score, an upset loss to the lowly Bears, but in the volume of missed tackles. By our count, the Pittsburgh Steelers missed 23 that day, as high as our Josh Carney has ever tracked.

Last week against Baltimore was much better, missing only 12, with several of those coming late with the win already locked up. Talking about the game, and improvement in that area, several Steelers have said they went back to the basics of tackling.

“When we played Chicago we had a poor outing when it came to tackling,” Ryan Shazier told the media. “And we can’t do that. So we just made sure we wrapped up and took guys to the ground…guys are in the NFL, guys aren’t going to let you hit them as hard as you can if they’re looking at you. I think we did a better job of that and forcing them to do things we wanted them to do.”

Bears game aside, the Steelers have done a pretty good job through the first month of the season. 15 against Cleveland in the opener, not the best number but understandable for the opener. Only five against the Minnesota Vikings, one of the lowest figures we’ve recorded, and then 12 last week.

Not going for the killshot but coming to balance and playing with technique certainly does wonder for a team. It’ll prevent a team like the Bears from killing the Steelers on their outside zone runs, something Butler noted in his interview.

“I thought I saw a little bit more improvement in our tackling,” Butler said via the team website. “That’s the biggest thing we gotta do. If we tackle well, I think we’re in position to make some plays. If we keeping doing that, we’ll be fine.”

They’ll have to continue that upswing in solid tackling against a physical Jacksonville front with a pair of big backs. Leonard Fournette and Chris Ivory make their living off broken tackles and yards after contact. If the Steelers can miss fewer than say, ten on the day, it’s hard to imagine them losing to the Jags.