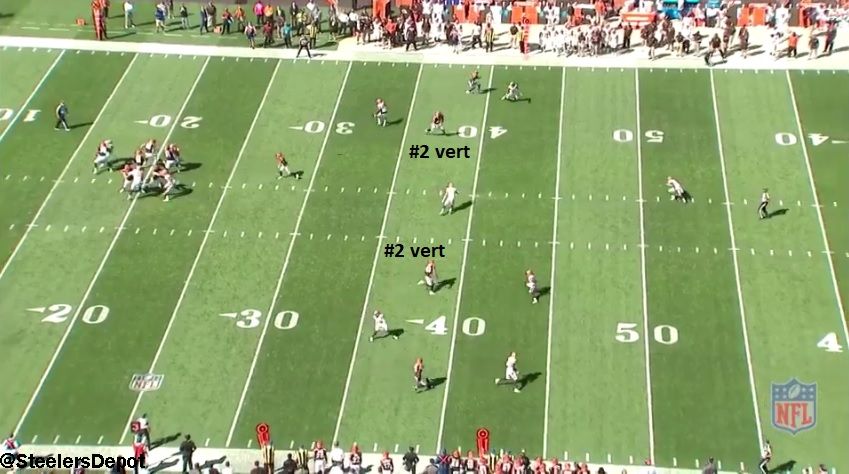 Up front, I gotta point out how much better the Bengals’ offense has been under new OC Bill Lazor. I know you saw what happened the first two weeks. Hot. Garbage. But they’re a totally different team right now. Over their last three games, they’re averaging 26 points per game. They’ve gone from having the league’s worst red zone offense to having the fifth best.

Part of that, as Mike Tomlin has alluded to, is feeding their playmakers. That’s meant Joe Mixon and A.J. Green. Mixon has actually still struggled, averaging only 2.8 YPC, but he’s been the clear #1 back since Lazor was put in charge. He’s averaging 17 carries over that span while Jeremy Hill and Gio Bernard have taken a back seat.

The run game is still below average and hasn’t completely gotten all the way back.

The offensive line. Sort of a mess, they rotate guys but the expected starters.

Ogbuehi-Boling-Bodine-TJ Johnson-Andre Smith. Jake Fisher will rotate in at tackle.

Lot of inside/outside zone but they’ll run some power too. Even pull their center, Russell Bodine. Or this wrinkle, kicking out the three tech. But the fact the tackle let him through took care of that. Sorta works like a wham block.

AJ Green has resumed as the focal point. He has 51 targets; the next receiver has 25. Averaging a whopping 15.8 YPC and has three touchdowns, one in each of the last three games (when Lazor took over). 22 catches over that span, too. No one comes close to touching that number and the offense has struggled to find any other weapon. Tyler Eifert is done for the year. John Ross has been hurt too and unlikely to play against the Steelers. But Green is as tough as they come.

Alert for smash and spot concepts inside the red zone. Especially if AJ Green is lined up in the slot, unusual for him. Reduce split to run the corner for six.

They’ll mix in screens to Bernard, hit a long touchdown against the Cleveland Browns, and they have a tare concept (two outs and a vertical route), they’ll mix in.

Offense has seemed to be simplified. Lot of mirrored concepts, same routes being run on the same side. 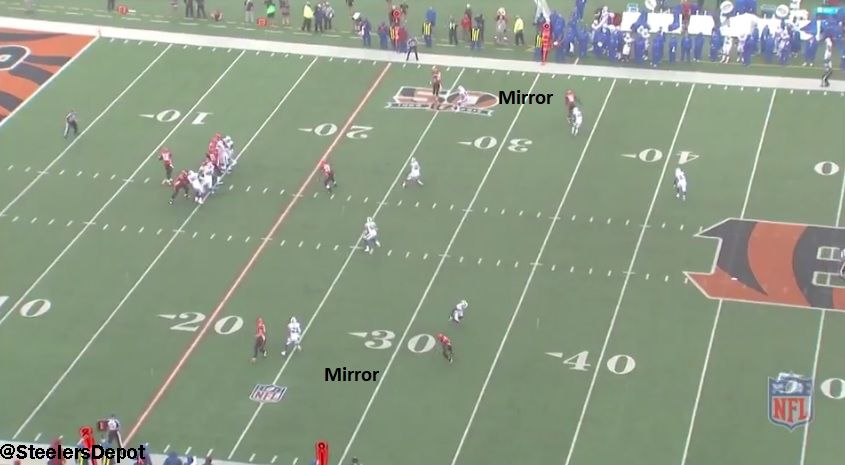 Steelers have to be prepared to match four verts, too. Can’t let #2 run down the seam.

It’s Cincinnati Bengals week for the Pittsburgh Steelers, so expect it to be another highly contested matchup at Heinz Field Sunday afternoon at 4:25 p.m.

Heading into Sunday’s matchup, the Bengals’ offense has slowly gotten back on track after the firing of then-offensive coordinator Ken Zampese, who directed an offense of Andy Dalton, AJ Green, Jeremy Hill and Giovani Bernard to just nine points in eight quarters. Since the change at offensive coordinator to Bill Lazor, the Bengals have scored 24, 31 and 20 points in the three games (25 points per game).

Cincinnati has seemingly risen from the dead after an 0-2 start, clawing their way back into the AFC North and AFC Playoff picture as Dalton has taken care of the ball well after a disastrous Week 1 performance (four interceptions) and rookie Joe Mixon has taken over the leading role in the backfield for the Bengals’ offense.

While Dalton has gotten back to his winning ways and Mixon has emerged as the go-to back in Cincinnati, Tyler Eifert’s long injury history cropped up again, forcing the talented move tight end to injured reserve with back surgery, forcing him to miss the rest of the season, and the two young, bookend tackles in Cedric Ogbuehi and Jake Fisher have largely been disappointments, forcing the Bengals to rotate in new tackles the last two weeks.

But let’s get back to Dalton, who has thrown seven touchdowns to just two interceptions since the Week 1 performance against the Baltimore Ravens. Since that game, Dalton has dialed up the deep ball a bit more, hooking up with Green for a long touchdown against the Bills, while also developing a strong rapport with backup tight end Tyler Kroft due to Eifert’s injury.

When Dalton is clicking in the passing game, it takes pressure off of the run game, which hasn’t been very good this season. While Mixon has become the clear No. 1 back for the Bengals, he’s averaging just 2.8 yards per carry. Against the Bills though, the rookie had the best game of his young career, rushing for 51 yards and his first touchdown on just 15 carries (3.5 yards per carry).

As Mixon has emerged, Hill and Bernard have watched their touches decrease dramatically, as the duo has averaged just 5.5 touches per game since Mixon took over the starting role on the road against the Packers. The Oklahoma product is what Hill and Bernard combine to be, and he’s easily their most dynamic back, but don’t forget about Bernard on Sunday. He usually comes through with his best performances against the Steelers.

Green has had a strong start to the season despite the offensive struggles at times, hauling in 32 passes for 504 yards, which is good for second in the NFL behind Pittsburgh’s Antonio Brown. Green does have three touchdowns on the season, but he has very little help opposite him when it comes to drawing away coverage.

Eifert would have helped in that area, but now that he’s gone for the year Brandon LaFell and Kroft have to emerge as playmakers. So far, so good for Kroft, but LaFell has been quiet through five games, hauling in just 15 passes for 108 yards.

A few years ago this was a dynamic receiving corps with Marvin Jones and Mohamed Sanu, but this group is now a shell of that with LaFell struggling, second-year wide receiver Tyler Boyd being a healthy scratch once and making little impact on the field (just six catches).

That doesn’t even begin to talk about rookie John Ross, who doesn’t even have a catch on the season. He does have one rush for 12 yards, but he fumbled at the end of that run in Week 2 against the Houston Texans on Thursday Night Football. I haven’t really seen him on the field since, offensively.

With Eifert out, Kroft has emerged as a two-way tight end. He’s a solid run blocker for the Bengals, but he’s really given defenses fits as a pass catcher, working the middle of the field well for the Bengals, combining with Mixon and Bernard as a safety valve for Dalton, especially in the red zone.

This team was once deadly on offense, but free agency ravaged this group, namely the offensive line, which might be one of the worst units in football.

Russell Bodine is not a starting-caliber center in the NFL, yet the Bengals have trotted him out there every week for the better part of three years. He’s a big reason the run game has gotten off to a slow start the last two seasons.

After losing both Andrew Whitworth (Rams) and Kevin Zeitler (Browns) this off-season, the Bengals plugged in Ogbuehi at left tackle and Trey Hopkins at right guard. It’s gone about as well as you’d expect, especially when adding Fisher into the mix at right tackle.

This is how the Bengals expect to line up along the line of scrimmage on Sunday:  Ogbuehi, Clint Boling, Bodine, Hopkins, Fisher, although Boling didn’t practice Thursday. Not exactly a decent offensive line. They’ll have their hands full with the Steelers’ front seven Sunday.

On special teams, the Bengals are pretty solid as kicker Randy Bullock has been solid for Cincinnati, hitting on 9-of-10 field goal attempts through five games, while punter Kevin Huber continues to be one of the top punters in the NFL, averaging 46.9 yards per punt on 26 attempts, dropping half of those attempts inside the 20-yard line.

Where this unit is really good is in the return game with Alex Erickson, who’s arguably a top 3 kick and punt returner in today’s NFL. On punt returns, Erickson averages just seven yards per return, but he did bust one loose for 26 yards this season. More often than not, he’s forced to call a fair catch, but he can be dangerous when attempting to return a punt.

Erickson makes his hay on the kick return though, averaging 26.3 yards per return, including a long of 41 yards on the season. Erickson did return one 72 yards last season in Cincinnati against the Steelers, so keep an eye on No. 12 in the return game on Sunday.