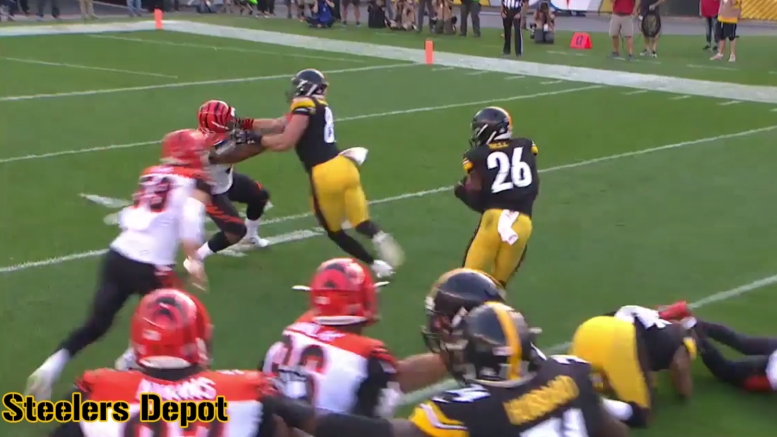 It’s not very often that the Pittsburgh Steelers these days every don’t predominantly feature three-receiver sets as their base offense. They did dip below the 50-percent threshold in four games last season, which was actually more frequently than I expected I would see when I went to look it up.

But that was a year in which their wide receivers were decimated. Three of the four games game during the seven-game winning streak at the end of the season when they turned the ball over to the running game. The other was the blowout of the Chiefs early in the year.

In 2017, the first time that it happened that they dipped below 50-percent usage of three-receiver sets in a game was just on Sunday, week seven. And it wasn’t even particularly close. On 72 total snaps, including penalties and victory formation, they ran only 29 plays from 11 personnel. That is just 40.3, substantially below a 50-50 split.

Vance McDonald and Xavier Grimble alone combined to see 60 snaps in the game, and only two of their snaps overlapped with one another, though 17 of those snaps did come out of the 11 personnel. But the fact that they were on the field so frequently is a strong indicator of the extent to which the Steelers employed run-look packages.

The 12 personnel look with two tight ends on the field was the second-most widely-used package on the day, seeing 20 snaps pairing some combination of McDonald, Grimble, and Jesse James together. Interestingly, though Chris Hubbard was required to start, they did not use any tackle-eligible looks against the Bengals with B.J. Finney.

The offense averaged five yards per play out of that package, though they only completed two of six pass attempts. But they went for 16 and 31 yards, so that still works out to 7.8 yards per pass attempt. Running the ball was tougher sledding, as they averaged about 3.7 yards per carry from that set, with two tackles for loss.

The most successful look was clearly the 22, which they turned to mostly toward the end of the game as they tried to close things out. With two tight ends and a fullback, they just focused on running the ball, and on 16 rushes, gained more than five yards per attempt, with just one for a loss, and three for at least 10 yards.

Considering that they ran just five of 33 plays—not even counting the three snaps in victory formation—out of the 11 personnel package, I would think that it’s safe to say they were milking the lead at the end of the game.

But 10 of their 29 snaps with three receivers on the field came during the two-minute drill, which inflates the numbers. During their first 29 plays, it was still only used about half the time, showing that they started out the game with a diversity in mind.