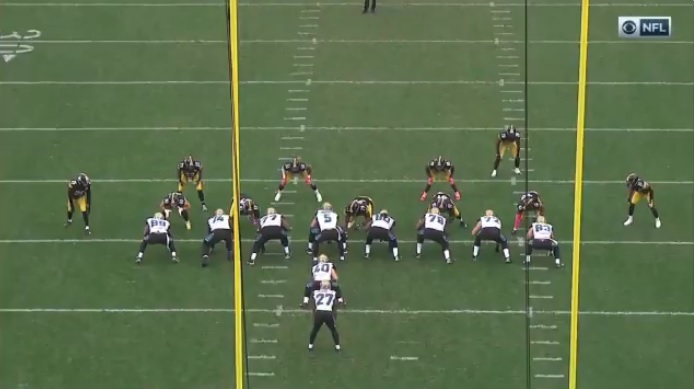 In one of their more disappointing losses in recent memory, the Pittsburgh Steelers were defeated 30-9 by the Jacksonville Jaguars Sunday at Heinz Field. Though the Steelers had as much to do with their own defeat as the Jaguars. Thanks to an insulting, almost offensive showing by the offense, the Steelers found themselves at their own mercy throughout the game.

All talk of a Ben Roethlisberger – Antonio Brown feud seemed to be silenced immediately. On the first play from scrimmage, Roethlisberger connected with Brown on a 49-yard pass over the head of Jaguars cornerback Jalen Ramsey. This catch was one of the ten total that Brown and Roethlisberger would share on the day for a total of 157 yards. Brown’s big opening catch would lead to the Steelers first points of the day, a Chris Boswell field goal to go up 3-0.

Boswell’s hat trick would not be the Steelers’ only hat trick milestone of the day as Roethlisberger threw a trio of interceptions on the day, all resulting in touchdowns for the Jaguars.

Cornerback Jalen Ramsey got the first of the game, intercepting a pass intended for Vance McDonald, leading to a Leonard Fournette touchdown to put the Jaguars up 7-3.

Roethlisberger’s second interception would come off a deflection with the Steelers up 9-6. The deflected pass went right into the hands of Jaguars’ linebacker Telvin Smith, who returned it 28-yards for a pick six.

With the ball back in their hands now down 13-9, after a missed extra point attempt, Roethlisberger and the Steelers looked to regroup and retake the lead. That thought process lasted a few plays as Roethlisberger was again intercepted, this time by safety Barry Church who returned it 52 yards for another Jaguars touchdown.

Roethlisberger’s third quarter gaffes were just a portion of the frustrating aspects of the Steelers’ offense. Roethlisberger attempted over 50 pass attempts and threw a career high five interceptions against the NFL’s worst run defense while running back Le’Veon Bell had just 15 carries.

The offense’s struggles spoiled an otherwise sound performance by the defense, who limited the Jaguars offense for majority of the game. Ryan Shazier added another interception, his second in as many weeks as the Steelers improve their takeaway streak to an NFL best 15 straight games. The defense also held Jaguars quarterback Blake Bortles to under 100 yards passing though Bortles only needed to throw one pass during the second half due to the Steelers’ struggles.

It will not get any easier for the Steelers as they will travel to Kansas City to take on the currently undefeated Chiefs at 4pm EST next Sunday.