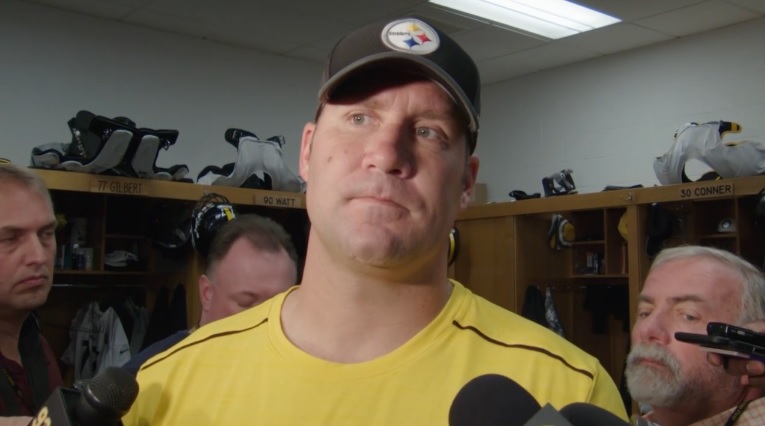 Not sure. It’s a name you don’t want if you live in Idiocracy and it’s not what you want for your offense heading into a week. But that’s how Ben Roethlisberger described the state of the Pittsburgh Steelers’ offense this week taking on a tough Jacksonville Jaguars’ defense.

“Everything,” Roethlisberger told reporters when asked what their defense is doing right. “They have a million and a half sacks. Forced fumbles, their secondary, they’ve paid a lot of money to. They’ve locked people down. Right now, we’re not really sure what we’re going to do.”

Jacksonville is allowing the fewest passing yards per game, only 147, and have given up only three touchdowns through the air. That’s tied for the second lowest mark, with the Steelers, in the NFL. Look at any pass defense stat and they come out on top. Third lowest completion percentage (58.2%), second lowest yards per attempt (5.2). It’s a unit that also leads the NFL in sacks with 18.

Linebackers Myles Jack and Telvin Smith make up two of the most athletic linebackers in the league. At 31 years young, Calais Campbell is having arguably his best season ever and leads the team with 5.5 sacks. And the team has made splashes in the secondary, drafting Jalen Ramsey high two years ago and signing A.J. Bouye to a mega-contract in the offseason. The two have combined for 11 pass breakups and three interceptions.

Of course, while Roethlisberger said he wasn’t sure how the offense will attack, there’s lots of time ot figure that out.

“Luckily, we’re not playing today or tomorrow. So we’ve got some time to get into the film room and figure some stuff out. But this will be a very good test for us.”

One glaring weakness they’ve shown, and probably one reason why their pass defense looks so good, is the Jaguars’ terrible run defense. They’re allowing 5.7 yards per carry, worst in the league, and the five rushing touchdowns they’ve given up is third most. Last week, they gave up over 250 yards to the lowly New York Jets in an overtime loss.

There are parallels between the Steelers’ and Jaguars’ defense at nearly every level, making Sunday’s matchup an interesting one. Hopefully Jacksonville feels just as unsure as Pittsburgh.

Look for a full scouting report on the Jags come Friday with Josh Carney, Dan Vasko, and myself.