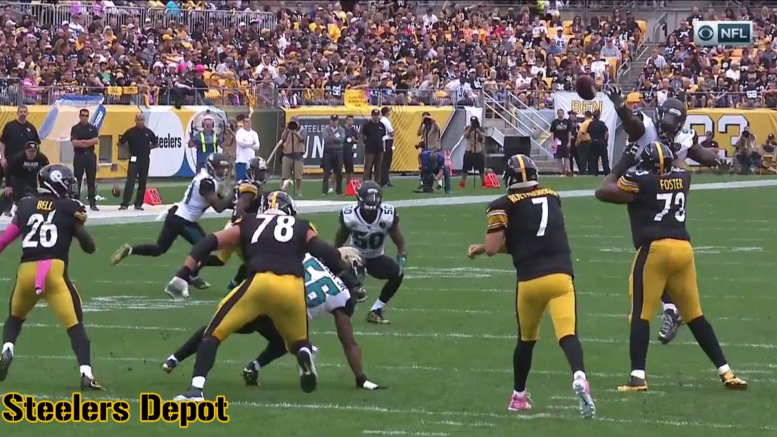 Immediately following the Pittsburgh Steelers Sunday loss to the Jacksonville Jaguars, frustrated quarterback Ben Roethlisberger facetiously said that maybe he just doesn’t have it any more after throwing five interceptions of which two were returned for touchdowns. Since making that remark, however, some of the local and national media, in addition to several fans of the team, have had a field day with what Roethlisberger said.

During his weekly interview on 93.7 The Fan Tuesday morning, Roethlisberger was asked to comment on his post-game comments and at no point did he concede that he’s lost any confidence in himself.

As you would probably expect him to do, Steelers head coach Mike Tomlin also addressed what Roethlisberger said immediately following Sunday’s loss to the Jaguars during his weekly Tuesday press conference and especially when he was asked if he currently feels the need to shore up his quarterback’s confidence following his five-interception game.

“Let me say this about Ben, Ben is as big-time competitor and an emotional guy that’s seen a lot in this business,” Tomlin started. “He’s not afraid to tell you guys the truth in terms of how he’s feeling at particular moments. Sometimes that might be things that might be somewhat alarming to you guys. There’s a lot of emotions at play when these guys poor themselves into competition. So, he might say something after the game that might allow you to run and overreact to it.

“The bottom line is that I’ve known Ben for 11 years. I know the competitor he is, I know his level of confidence. What he says after a five-interception performance, moments after a five-interception performance, probably is not reflective of who he is and how he feels. It wasn’t reflective of who he is and how he felt when he walked in here yesterday. He looked like a guy that’s ready to gun sling and get back at it. That’s more in line with the guy that I know and what I anticipate from him and that’s why I take some of those comments with a grain of salt and I don’t react the way some of you guys react when you hear comments.”

Unprovoked, Tomlin also referenced the retirement-related comments that Roethlisberger made a few days after the Steelers lost to the New England Patriots in last season’s AFC Championship game.

“Last year, after a very disappointing playoff exit, he talked about retirement. You guys ran to the moon and back with that,” Tomlin said. “Here we sit today and he’s our quarterback, so, write what you will.”

“I don’t think there’s anything there in terms of mechanics,” Roethlisberger said after first explaining that he’s asked his agent if he’s seen anything related to that and that he didn’t. “My shoulders and elbow feel good. Typically, that’s the first sign of mechanical issues is when you start having some elbow or shoulder pain, or issues, and I don’t have any of that. So, honestly, I think your talent, it doesn’t go away, it goes awry sometimes, but it doesn’t go away. So, we’ve just got to come back out and be ready to play some great football.”

Roethlisberger will next play football Sunday on the road against the Kansas City Chiefs, who enter that contest undefeated.

“We want to go in (Arrowhead) and be tested by the best, probably, in the NFL right now,” Roethlisberger said.