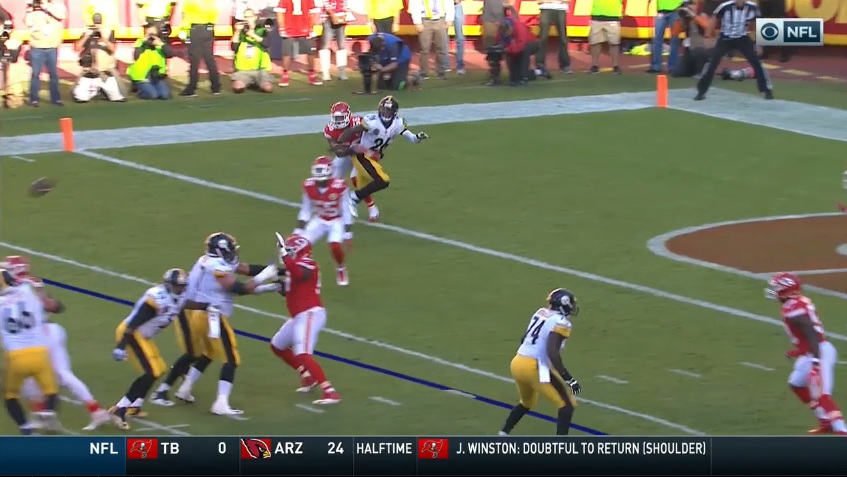 Red zone offense is one of the most critical components to the Pittsburgh Steelers’ success or really, any team. They were better in the big victory over the Kansas City Chiefs but still not perfect. Talking on his weekly radio spot with Ron Cook and Andrew Filliponi, , Roethlisberger broke down their late second quarter red zone possession that ended in a field goal.

The Steelers had the ball on the Chiefs’ two yard line with 3:07 left in the second quarter. On first down, Roethlisberger threw out of the end zone incomplete. Fans were upset it was a pass but according to Big Ben, it was a designed run.

“We actually called a playcall, they gave us a defense that we couldn’t run the play. We had a run play called. We had a lighter personnel in. They brought their goal line heavy package in. We called the play and the line looked at me like, ‘Ben, we can’t run that play. You gotta change it.’ I went to the shotgun and looked AB on a pass play and then threw it away.”

Roethlisberger called it a “make it up” play that ultimately didn’t work out.

On second down, the Steelers ran to the left but the Chiefs knifed in for a four yard loss. On third and goal from the six, the play, and the throw, went to Le’Veon Bell.

“We got the look where the linebacker was going with Le’Veon….we talked about it all week in practice, when that linebacker goes out with Le’Veon, and I told Le’Veon that, I’m kinda selling out to you. That’s the matchup we wanted, that’s the matchup we got. I told him to be patient on his route. I thought he ran a great route. I put the ball where I wanted to. Looking back on it yesterday, he didn’t just get grabbed. The guy had two arms around him. Pulling him, did all kinds of stuff. We had a good playcall, we had the matchup we wanted, everything was good.”

You can see linebacker Derrick Johnson grab around Bell’s waist in the article photo above but the refs didn’t throw a flag, forcing the Steelers to settle for a field goal. But it’s definitely the right matchup to target, the elder Johnson pitted against the best back in the league.

Most interesting from this conversation is his commentary on the first play. And you can bet it’s not the first time Roethlisberger has had to check out of a run play.

It’s why looking at just box score numbers can be tricky when determining a commitment to run. Because if an offense is committed to it, you can bet defenses are committed to stopping it. That’s what the Chiefs did and the Steelers’ offense was forced to respond.