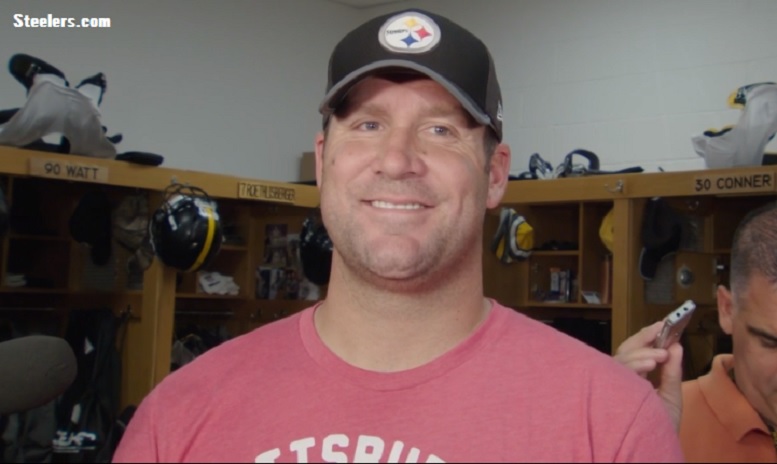 The Pittsburgh Steelers have certainly had their share of team drama this season as every week since the anthem incident in Chicago it seems there’s always some sort of inside turmoil the team needs to address several days before they even hit the practice fields on Wednesday. Because of all that seemingly weekly drama that has surrounded the team the last several weeks, Steelers quarterback Ben Roethlisberger was asked Wednesday morning during his weekly session with the local media if he’s ready to start talking about only football soon.

“Yeah, would you guys ask me about football? It’s on you guys, isn’t it?” Roethlisberger replied.

Roethlisberger was soon reminded by a member of the media that reporters and beat writers didn’t make wide receiver Antonio Brown throw a water cooler on the sideline a few weeks ago.

“But you ask the questions,” Roethlisberger stated while smiling.

Roethlisberger was then asked how he goes about blocking all of this drama out.

“Stop having interviews like this,” the Steelers quarterback replied.

After Roethlisberger was told by Jeremy Fowler of ESPN.com that some players like to use that outside talking as motivation, he was then asked in so many words to talk about how he personally deals with the things that are written or said about him by the media.

“Ignore it,” Roethlisberger said, before adding, “Especially your network [ESPN], no offense to you though, Jeremy.”

Well, it’s obvious that Roethlisberger doesn’t really ignore what ESPN has said recently about him and the team, right? Perhaps he and the rest of his Steelers teammates should just not watch or read anything said or written about the team until they right the proverbial ship on both sides of the football.

Like it or not, Roethlisberger’s facetious Sunday post-game comments about him possible not having it anymore has created quite a stir these past few days. While most of the media has obviously looked past those comments as merely being nothing more than Roethlisberger being frustrated following one of his worst games of his NFL career, he has to realize that the media loves those kinds of soundbites.

On Wednesday, Roethlisberger was asked to clarify that his Sunday post-game comments about him not having it anymore was indeed merely him being frustrated immediately following a very poor performance.

Roethlisberger was then asked if he knows he may have opened Pandora’s box with his Sunday comments about him possibly questioning his abilities right now.

“That’s fine, they can question me, I don’t question myself,” Roethlisberger said. “The ones that are close to me to don’t question me, that’s what matters. No offense to you guys, but it doesn’t really matter to me how you guys question me or not, or the quote unquote professional talking heads on other sports networks who are supposed experts and things like that.”

It certainly will be interesting to see how and if Roethlisberger is able to bounce back this coming Sunday in the Steelers. If for some reason the Steelers lose Sunday to the Chiefs and Roethlisberger plays a big part in that happening, he might as well not bother even turning on a television, radio or computer all next week.

Ben Roethlisberger talks about having confidence in himself & his teammates to bounce back this week, and moving on from a bad performance. pic.twitter.com/ru0TemKb3D