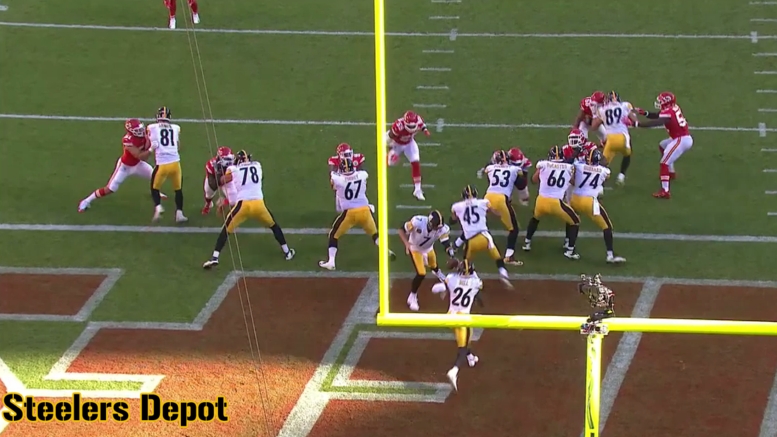 I think it’s become obvious at this point to most keen observers that the play-action pass is no longer an integral feature of the Pittsburgh Steelers’ offense, as it is simply not something that the team runs with great frequency, hovering somewhere around 10 to 15 percent of all dropbacks over the course of the past few years.

But the play-action passing game did seem to be a bit more active on Sunday, and perhaps it’s no coincidence that they saw their highest ratio of passes coming off of play action in the game in which they ran the ball with the most authority.

Of Ben Roethlisberger’s 27 dropbacks against the Chiefs, he incorporated play action into the delivery five times, which is still not a large radio, but is at least over 18 percent. More importantly, he actually had success doing it, which frankly had not been the case in recent years.

He was able to attempt a pass on all five of those dropbacks, and he completed four of them for 45 yards, averaging nine yards per reception, which is the sort of number that quarterbacks should be putting up while benefitting from play action—that’s why they bother running it, after all.

Now, one of those plays did include an inside screen pass to Le’Veon Bell that was completely blown up for a cascade of reasons and actually ended up losing three yards on a ball delivered five yards behind the line of scrimmage.

Of his other four throws, only one other was a short one, thrown a yard behind the line of scrimmage, a screen pass to the left to Antonio Brown that gained six yards. The other three targets were all deep balls beyond at least 15 air yards down the field.

He completed two of those 15-plus-yard throws, one for 17 yards—admittedly, on second and 19, on a play on which Brown actually came back upfield and lost two yards of forward progress—and the other for 26 yards.

You might be able to guess what the incompletion was, and it was a big miss in terms of spoiled opportunities. It was the first long ball to Vance McDonald that was just a foot or so too long beyond the tight end’s outstretched hands, delivered 33 yards down the field. But he did connect on the 26-yarder.

I have for a few years now wished that the Steelers would utilize play-action passes more frequently—for those wondering, two of the five came from under center, including the 26-yarder and the incompletion—only for my hopes to die away when I realized that their numbers using it had been poor.

This season as a whole, off of 23 play-action passes, the Steelers have averaged just over eight yards per attempt, though that does not factor in one sack and a one-yard scramble. They have also had two completed passes negated by penalties. They have not scored or turned the ball over when using play-action to date.