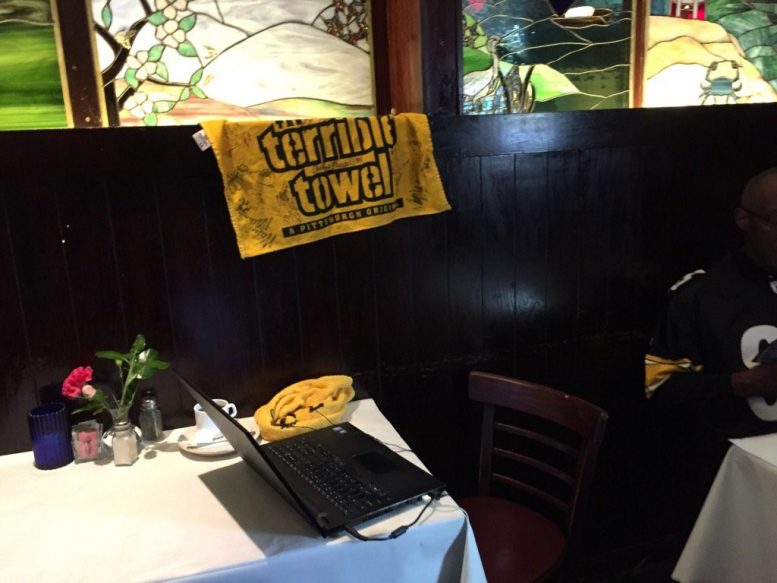 “We had ‘em all the way.” Any Burgher born before 1970 surely associates that phrase with the Gunner; Bob Prince who reserved that phrase for Pittsburgh Pirates victories. The more dramatic the game; the more deadpan his delivery … no exclamation point. Well usually, sometimes the Gunner’s emotions would takeover. I don’t think he would mind if his phrase is borrowed by me for Pittsburgh Steelers games. Sometimes it seems like they get more wins in a season than the Pirates do these days.

On the Steelers Vs Lions Winners/Losers article; HardPunkKore commented, “the Steelers can’t please most of the depot commentors unless they win 56 – 0. It’s just sad…” I had to remind him that “the Standard is the Standard” here in Steelers Nation. Coach Mike Tomlin does not award style points for Steelers wins, he has delegated that Herculean task to us fans.

The 1st half started with Steelers Depot fans at the ready. Pdupuis led the way in the first half discussion thread,  “Here We Go Steelers, here we go!!” The positive glow was soon dimmed when Eli Rogers could not quite bring in an end zone pass forcing a field goal on the opening drive. Ben Roethlisberger just seemed a bit off, but maybe it was in comparison to the opposing quarterback.   NinjaMountie stepped up as the thread’s morale officer … “so ben had one bad throw and a dropped td…. time to reset.”  Was it me or did the Detroit received appear to be college wide open for much of the game? Darth Blount 47 thought so: “It’s never the fact that we only rush 3 guys sometimes. It’s that when we do, we have 8 guys dropped who somehow can’t cover 4 guys….” Down 10-12 with 13 seconds left in the half; some panicked fans (me) wanted a long bomb heaved to see if some magic could be cast. Tomlin calmly had Ben take a knee to end the half. Time to reset as NinjaMountie had counselled earlier.

The top comment in the 2nd half discussion thread was a long one: “People may not want to make this a big deal but it’s a big one when you are the QB. If you watch Ben, his body language speaks more than anything he says. I remember the Ben from back in the days, this guy looks like he’s not into it and can’t get this offense up. Where is the passion? Where is the fire? He is the veteran and has to will this team, this offense to play better……I don’t see it. Just seems like he is running plays.”  Zarbor seemed to capture a sentiment. I know I was on the band wagon. My thought when an open Jesse James was overthrown on a 2nd & 9 from their own 3-yard line, “Ben sucks …” literally seconds later a 3rd and 9 throw and “… no wait Ben is Great!”  Great throw by Ben; awesome finish by Juju Smith-Shuster.

In this game, the normally very reliable Le’Veon Bell fumbled the ball causing at least a six-point swing. Ben’s deep pass intercepted on the second drive. Antonio Brown called for a push off negating a touchdown. Although the Three B’s did combine to score a first half touchdown (Ben’s pass to AB that was punctuated by Bell’s TD run) this was destined to be a close game. It took some good juju as in a liberal dose of Juju Smith-Shuster to prevail. The opening play, a 19-yard reception set the stage for his day. The 97-yard catch and run with Juju looking back probably thinking he was in a dream. Finally, the 4-yard catch for a final first down that was the prelude to another Black & Gold victory formation. It did take a valiant effort by the defense that bent but did not break making two huge goal line stands. Tyson Alualu making the first 4th down stop. Ryan Shazier so close on that interception but another turnover on downs. Bent?  More like twisted like a balloon in the hands of an expert at making balloon animals. 423 yards passing by Matt Stafford yet not a single touchdown given up. Amazing.

We lost Fats Domino last week. Some irony as his very first single was the Detroit City Blues recorded December 10, 1949. “Yes, Detroit City, it was the finest city it was … when you leave that city and you feel this kind of love. Just one goes out easy and you find a good place to go.” Well that would be the Burgh. You feeling it? Lions fans are feeling a different kind of blue today.

In addition to being the spiritual energy that brings good or bad luck; juju is also a style of music popular among the Yoruba in Nigeria. Check it out; juju music called Leave Everything to God,  by Chief Commander Ebenezer Obey & His Inter-Reformers Band.

Earlier in the weekend, I attended a high school football game in Maryland with other alumni from my school. Winston Churchill is coached by former Steeler defensive back Willie Williams who played in two Super Bowls for the Black & Gold (the second one was better). I ran into some Steelers fans at that game: 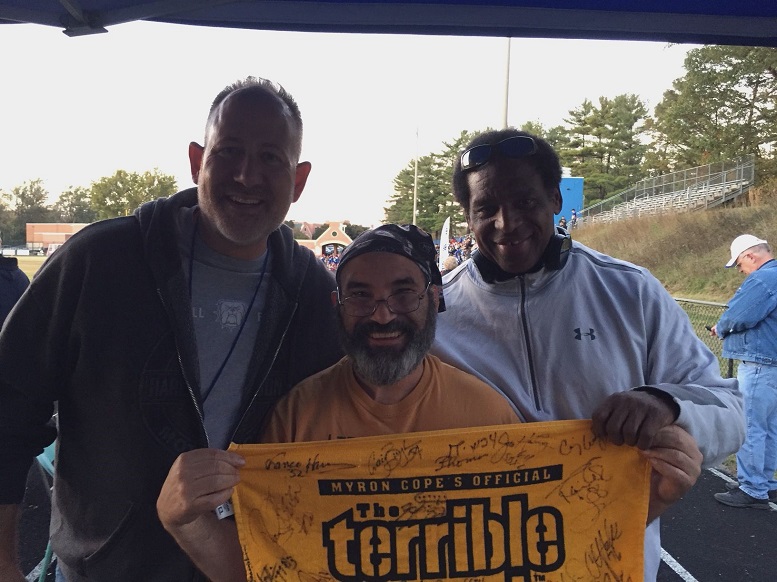 I love stories of how folks became fans of the Black & Gold. Jay Dove grew up in Maryland and played football at Churchill but became a Steelers way back in 1968. He was watching a game with his dad & brothers. Redskins versus Steelers. The Redskins had Sonny Jurgensen quarterbacking but finished 5-9. The Steelers had Kent Nix & Dick Shiner and were even worse at 2-11-1. The Redskins won that day, but Jay remembers how hard the Steelers hit. He became a fan that day and remains so.  I just met the other fellow that day (J. Morris?). He is a New Yorker who is the father of a current student. He saw my Terrible Towel and came over to show his credentials. A Steelers logo embedded on his phone’s screen. When he was growing up in New York, he was not enamored with the local teams that all his buddies followed. A contrarian he wanted to find his own team. At the time, the top teams were the Cowboys, 49ers & the Steelers. He loved the Steelers defense and was hooked never to let go. 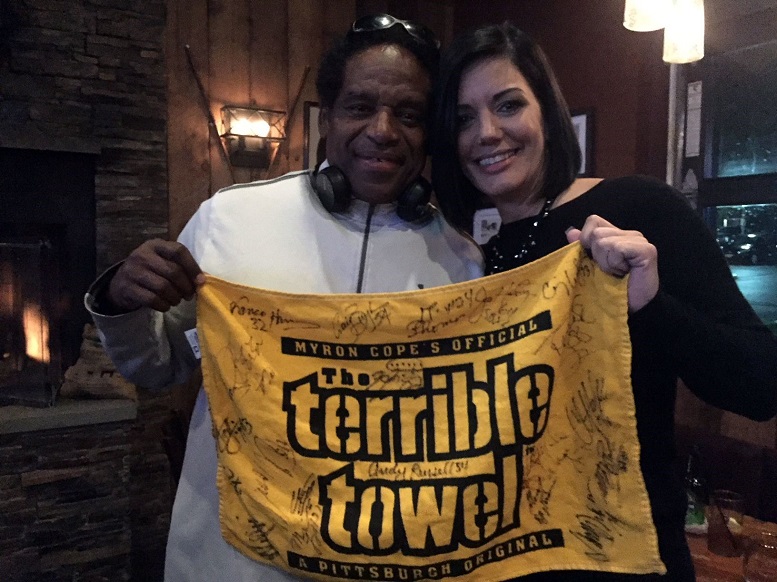 Congratulations to Willie Williams; the Churchill Bulldogs won 49-7. I exchanged messages with him and promised to give his team a plug in Steelers Depot. Another Steelers fan I met at the game in Maryland was Angela (hope I remembered her name right!). She’s pictured her with Jay Dove during the 5th quarter. Originally hailing from Monessen and then Belle Vernon, her family was part of the Pittsburgh diaspora and she ended up going to high school in Florida. But she was already bleeding Black & Gold. Her fandom cemented when Steelers players came to play the faculty when she was in Middle School. Her son is a tight end at Holy Cross; her dream come true would be him wearing the Black & Gold someday.