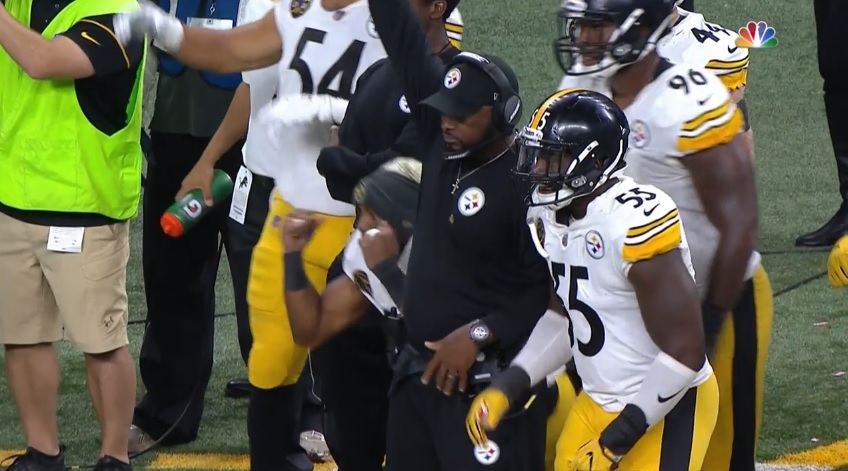 Survive and advance. That’s the motto. Your winners and losers.

JuJu Smith-Schuster: JuJu on his horse. What a day for the rookie, who began it with a 41 yard pickup and ended it with the second most yards by a Steelers’ rookie in franchise history. His 97 yard touchdown nearly brought a tear to my eye and was the deciding factor in the win.

Javon Hargrave: Hargrave was a wrecking ball and I’m glad he finally got that notice on a national stage. He worked over center Travis Swanson all game but no play was more crucial than the 4th down play at the end of the game. Only a three man rush and still forced the throw. He’s a beast, plain and simple.

Sean Davis/Vince Williams: Lumping them together for their physicality. There were missed tackles early, our Josh Carney will be a busy man, but both played really well. Especially where it counted, in the red zone, where they filled the run as well as you could ask for. Williams was second on the team with eight tackles while Davis chipped in six and two pass breakups.

Red Zone Defense: It was a unit that, let’s be honest, has been horrible all year. Entering Sunday night 26th in the league in the red zone, they pitched a shutout tonight. The Lions were 0-5, moving the ball effectively until they reached the 20. Time and time again, they were turned back. The goal line defense even got their first stop of the season. Everything’s turning up Milhouse.

Tyson Alualu: Not the best performance of the team tonight but thought it was really solid. Pass deflection and he snuffed out Matthew Stafford’s 4th down sneak that probably would’ve resulted in a TD. He hasn’t been spectacular but he hasn’t been required to be.

Mike Hilton: Hilton was steady as ever, blanketing in coverage and providing excellent run support from his slot corner spot. For such a young guy, that consistency is even more remarkable.

Jordan Berry: Berry’s caught a lot of heat over the past few weeks but I think he quieted those concerns with tonight’s excellent performance. Averaged 47 yards per punt, a long of 53, and two landed inside the 20. The Lions had a really dangerous punt returner and Berry’s hangtime and directional punting helped negate that.

Mike Mitchell: Certainly not Mitchell’s finest night. Being a Cover 2 safety is a tough life to live but Mitchell wasn’t stopping any of Stafford’s hole shots. And when Mitchell made contact, he wasn’t able to separate player from ball. He wound up leaving with an ankle injury.

Keith Butler: You can’t put it all on Butler, the players have to execute, and ultimately the Steelers only allowed 15 points. But the three man rush was infuriating. It’s something he’s used in the red zone, which has been effective, and something I have no problem with. But he let Stafford drive the field time and time again, even when the pass rush didn’t get home.

Defensive Communication: But when the players were asked to execute, they faltered. Communication was an issue in the first half of last week but the Lions had the talent to make the Steelers pay. Twice when they dropped eight, they still managed to blow the coverage.

Outside linebackers: Who were pretty much non-existent tonight. Bud Dupree and T.J. Watt pretty quiet tonight. Watt did well dropping into coverage but against a sub-par line, we were all expecting more.

Eli Rogers/Justin Hunter: Rogers mucked it up with a clear drop on the Steelers’ opening possession. Didn’t take advantage of the opportunity with Martavis Bryant inactive. Hunter didn’t have any egregious play, and did move the sticks on his lone reception, but was a non-threat vertically, the area he’s supposed to excel at.