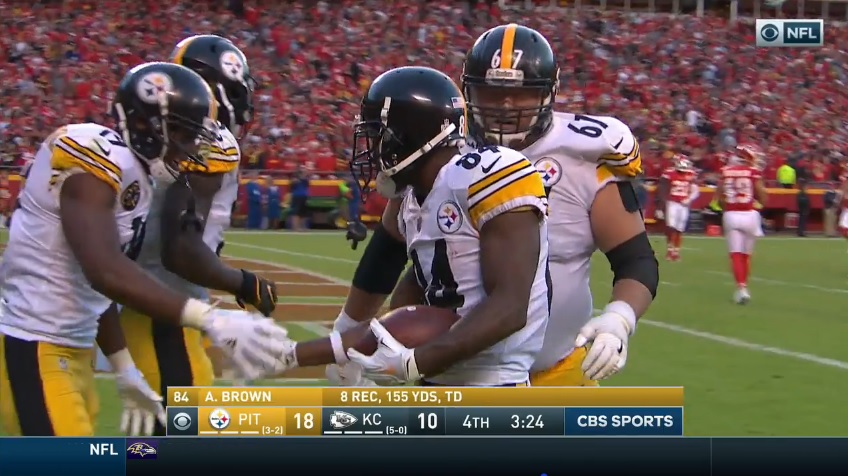 Antonio Brown made one of the most ridiculous grabs of the season for the game’s biggest play, a 51 yard touchdown off a deflection in the fourth quarter. But for Mike Tomlin, it was as routine as it was ridiculous.

Following the Pittsburgh Steelers’ 19-12 win over the Kansas City Chiefs, Tomlin was asked if he was nervous the play was going to end in disaster.

“I always bet on AB,” Tomlin said via the team website. “I’ve stood on a lot of sidelines over the years and watched him work. Can’t say I’m surprised by it, to be honest with you.”

If you haven’t seen the catch, or want to see it again, it’s worth the look.

That play gave the Steelers enough breathing room to survive the Chiefs’ fourth quarter surge. Brown finished the day with eight grabs for 155 yards and a touchdown. It was only his second score of the season but came in a critical moment, both of the game and season. And as usual, Brown brought his best when the Steelers needed it the most.

Brown will enter Week 7 continuing to lead the league in receptions and receiving yards. He’s on pace to end the year with 128 receptions for 1866 yards. The latter would be a career high. In case you’re wondering, because we normally end up having this conversation near the end of the year, Brown will need to average 130 yards per game the rest of the season to become the first WR in NFL history to finish with 2000 yards.

It’ll be difficult. But not impossible. And knowing Antonio Brown, as he did on that touchdown, he’ll make it look effortless.