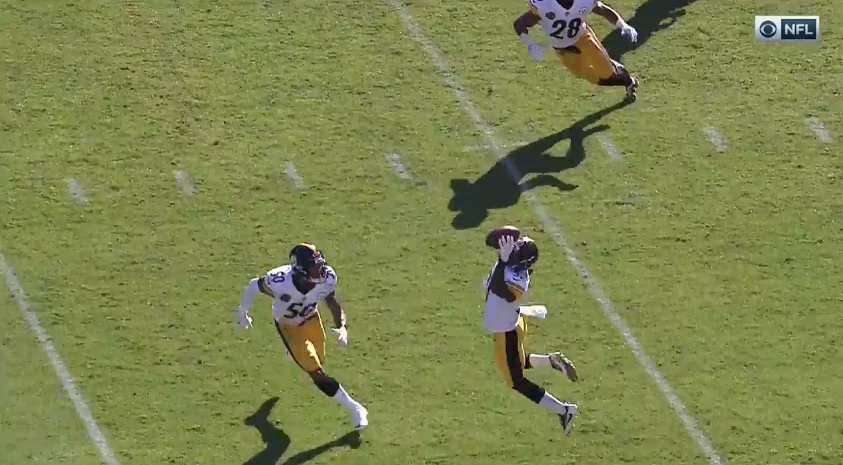 You know the names. The once highly touted cornerbacks who didn’t do diddly in Pittsburgh. Senquez Golson is the biggest name, still a free agent after the Steelers finally gave up on him. Curtis Brown. Cortez Allen. The allure of Gerod Holliman from box-score scouts. There’s an ugly history. But Mike Hilton is a bright spot. The inverse, the guy so unknown you can’t even say he was forgotten, who caught the Steelers’ attention and now serves as the clear-cut starting slot corner.

He was rewarded for that work with his first career interception Sunday, clinching the win over the Baltimore Ravens, reeling in a tipped pass from Ryan Shazier in the fourth quarter.

Post-game, Hilton spoke with Steelers.com’s Missi Matthews to break the play down.

“We were in one of our Cover 3’s,” Hilton said. “Number two went vertical, Ryan, he was able to make a play. He got the ball lifted, was able to get his hands on it, and I was right there in the right spot to make a big play. And it helped us win.”

Hilton capped off his most productive today, also recording his first sack. That was one of the aspects of his game that endeared him to the coaching staff, the know-how and ability to blitz off the edge. He credited the gameplan Keith Butler created, not by mentioning his name directly, but by agreeing the secondary had a good feel for the Ravens’ playcalls.

“Just the type of routes they ran. Certain downs and distances, we knew they were going to run certain routes. And me and Ryan were able to be in the right place at the right time.”

It was a level of splash plays the secondary needed. Hilton’s INT was the first such one by a Steelers’ corner all year long, which I’m sure no one would’ve guessed in a million tries a couple months ago. To state the obvious, the more plays like this the Steelers can offer up, the better the odds they’ll make a deep playoff push.