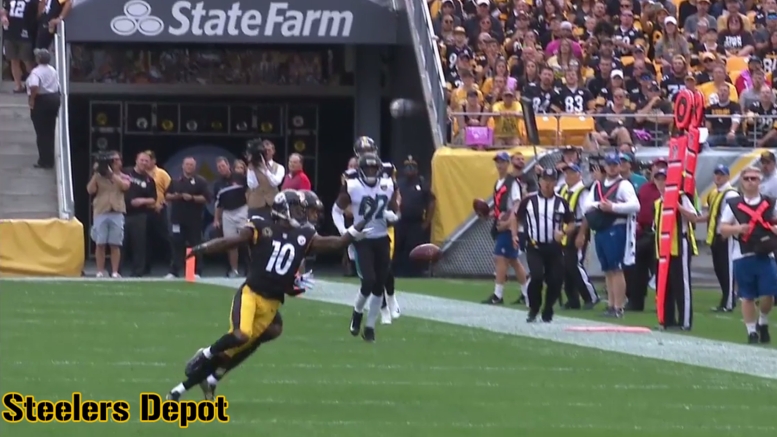 We have not yet seen the supposed growth of Martavis Bryant on the field this season, during which he has 15 receptions for a little over 200 yards and one touchdown in five games. It’s a good thing that we have seen his growth off the field as a person, which has allowed the Pittsburgh Steelers wide receiver to better deal with his lack of productivity.

While he embraced the process of coming back and becoming the player that he showed glimpses of being in 2014 and 2015, however, that does not mean that he lacks for confidence. While he acknowledged after a practice session this week that he is “not producing like I did two years ago”, he expects that to change.

“It’s gonna come”, he told Jeremy Fowler. “I’m not running from it. Just trying to get better and learn from it”. Last Sunday, the former fourth-round draft pick caught five passes, but they totaled just 21 yards combined.

Not that is has all been on him, of course, though on a couple of those receptions, on crossing routes, he certainly didn’t manage to use his size to his advantage, going down seemingly far too easily on soft tackle attempt for a player of his size. He also failed to hold onto one ball on an intermediate throw after being hit by a defender.

Many of the targets that have gone his way, however, have come up short not on the receiving end, but on the passing end. Ben Roethlisberger has missed him on a number of deep passes, including one against the Jaguars, though he was under pressure on the throw. He has also frequently targeted Bryant high on passes that dragged him out of bounds, uncatchable in the field of play.

“Everybody wants to be great”, Bryant said of how he approaches the game. He knows how much he has already accomplished having been able to even successfully take the field after a year-long suspension. “I came a long way, one of the first three people to come back from being suspended” for a season, he said. “I’m just happy to be back in the process, getting better. I think we’re very close. It’s gonna happen, man. Just gotta be patient. I’m not slowing down for anything else”.

When it comes to his production, he of course bears much of the blame. He has already dropped two passes this season, not including the aforementioned pass that should have been held onto through contact.

But with the play from the quarterback position, particularly on deep passes—and Bryant sees among the deepest average depth of target in the league—as well as the protection to help those passes get off, there are a number of contributing factors. Will the turnaround start today in Kansas City?

“It ain’t going to keep happening like this for long”, he said. “It’s just a matter of time before it happens again. I’ve got to stay the course. I’m not forcing it. I’ve just got to let it happen, and when it happens I need to start being more consistent”.