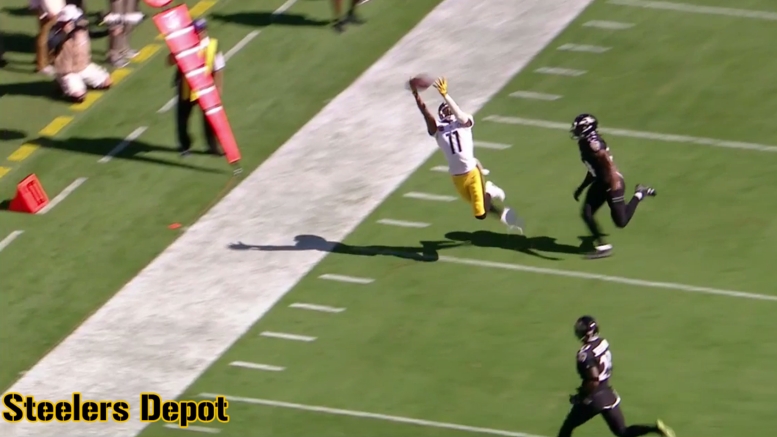 Some of you got your wish on Sunday. Those of you, that is, who were demanding to see Justin Hunter on the field. The fifth-year wide receiver made the Pittsburgh Steelers’ roster as the sixth wide receiver, initially, but after three games, he was given his first gameday helmet, and he saw nine snaps against the Ravens.

So what did he do on those nine snaps? Well, he caught one of two targets for five yards, though the play actually gained 20 yards because 15 more were tacked on for a roughing the passer penalty. The incompletion came on a deep target that he was unable to bring in on third down.

For the most part, the Steelers used him as an outside wide receiver, although he did receive two snaps lined up in the slot. One of them was on a 15-yard run in which he actually gave the appearance as though he might care about trying the help the play succeed.

While he was predominantly used as a third receiver—most of the time coming on the field in favor of Martavis Bryant rather than JuJu Smith-Schuster—what is interesting is that on three of his nine snaps, the Steelers lined up in the 22 personnel, with the veteran as the lone wide receiver.

In the early portions of the season, the Steelers were actually giving Smith-Schuster some snaps out of the 22 personnel, but on Sunday, he go no work at all in any packages as the lone wide receiver, and only a few of his 57 snaps came outside of the 11 package with three wide receivers on the field.

But the question that is left to be answered is this: did Hunter do anything that deserves a continued helmet on game day, at Eli Rogers’ expense? After the third-year wide receiver muffed a punt, and caught another one off a hop, his role as the punt returner became a moot point, which allowed the coaching staff to make the switch.

But nobody said it was permanent, and he did not exactly make an impact that would suggest that they can’t sit him again. Not that he was given all that many opportunities, but I can’t help but wonder if this is going to become the two-dogs, one-bone hypothetical for a helmet that the slot position was supposed to be between himself and Smith-Schuster.

While Rogers did not do anything spectacular either in the first three games—he did not even see a target in the third game on about 20 snaps—he didn’t do anything that was deserving of a benching either.

What could hurt the Louisville product is, somewhat ironically, his lack of flexibility, now that he was taken off of punt duties. With Hunter’s ability to play both outside and inside, Rogers is somewhat one-dimensional as a slot presence at a time that the Steelers appear to be gravitating a bigger presence in the middle of the field.